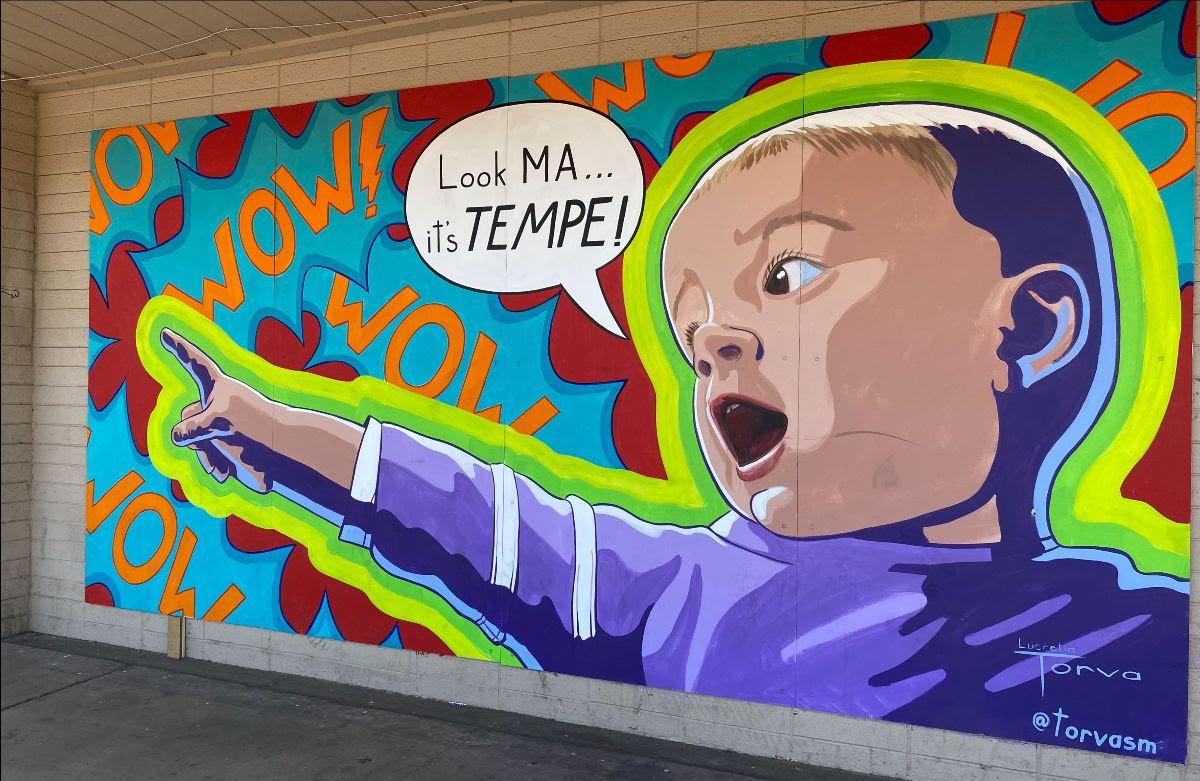 It’s not easy finding a location that does justice to all that is Playboy Manbaby, the TikTok-ing, fun making, super silly band whose frontman Robbie Pfeffer blew up on social media during the pandemic.

But Danelle Plaza comes close. Pfeffer and his band members gathered earlier this year in the parking lot of the crumbling strip mall on the southwest corner of Southern and Mill avenues in Tempe.

Most notably known as the location of beloved dive bar Yucca Tap Room, Danelle Plaza once housed an actual skatepark. Now it’s covered in murals and other artistic attractions.

“[The art] was intended to communicate to the city the value that artists had for places like Danelle Plaza that are otherwise overlooked,” said Rob Moore, who works with artists to coordinate installations at the plaza.

Around 40 to 50 artists have contributed their work to the space.

Moore started The Danelle Project in 2016 as an effort to revitalize the plaza.

He said he feels like a custodian because he spends so much time cleaning the windows of the installations.

“There’s like, all these amazing artists, and then there’s me with my Windex,” Moore said. “It’s fun, and when the windows are dirty, it shows that people are interacting with the projects.”

The most recent addition to the plaza is a piece by an artist known as The Lady Egg.

“A lot of spaces are so over-adversited, you know, Danelle is a little bit more under-the-radar. It’s a little more exploratory, you almost have to find it,” Moore said. “Lady Egg’s piece is very similar, where you almost have to discover it on your own. You run across it, and you wouldn’t otherwise know it was there if you’re not paying attention.”

Found by looking through a slit in a window, the installation consists of two spotlights pointed at large capital letters spelling out “REAL LIFE” in front of a large brown orb. To find it yourself, Moore recommends going at night and looking for yellow.

There are more than 30 art pieces currently residing in the plaza, including murals scattered around the lot. Some pieces rotate seasonally and some are more permanent.

One of the murals, “Rise,” is painted on the backs of decommissioned street signs. Originally commissioned by Tempe public art, “Rise” now lives on Danelle Plaza’s long back fence, right next to the former, now filled-in skatepark.

“Reusing objects and giving them a new life as really special artwork is just kind of my bread and butter,” said Laura Spalding Best, the artist behind the mural.

After its stint near Tempe Town Lake, Best was ready to retire the piece for good.

“I was kind of sharing and posting on my Instagram and things like that, that I was going to be sad to see it go but it was such a great piece and I was going to put it in storage and decide what its next life was,” she said. “Rob Moore…contacted me and was like, ‘Hey, like, a wacky idea for you, do you want to keep it in Tempe and install it right away?’ So that was amazing.”

The mural depicts an urban landscape, and the gradient on the signs mimics the shifting of sunrise to sunset.

“[Danelle Plaza] is just my kind of speed. It’s a really genuinely quirky, offbeat kind of place, which is just a really special haven for art and artists, kind of with no restrictions or expectations,”Best said. “A weird oasis like that I think is always really important for local community and a local art scene.” 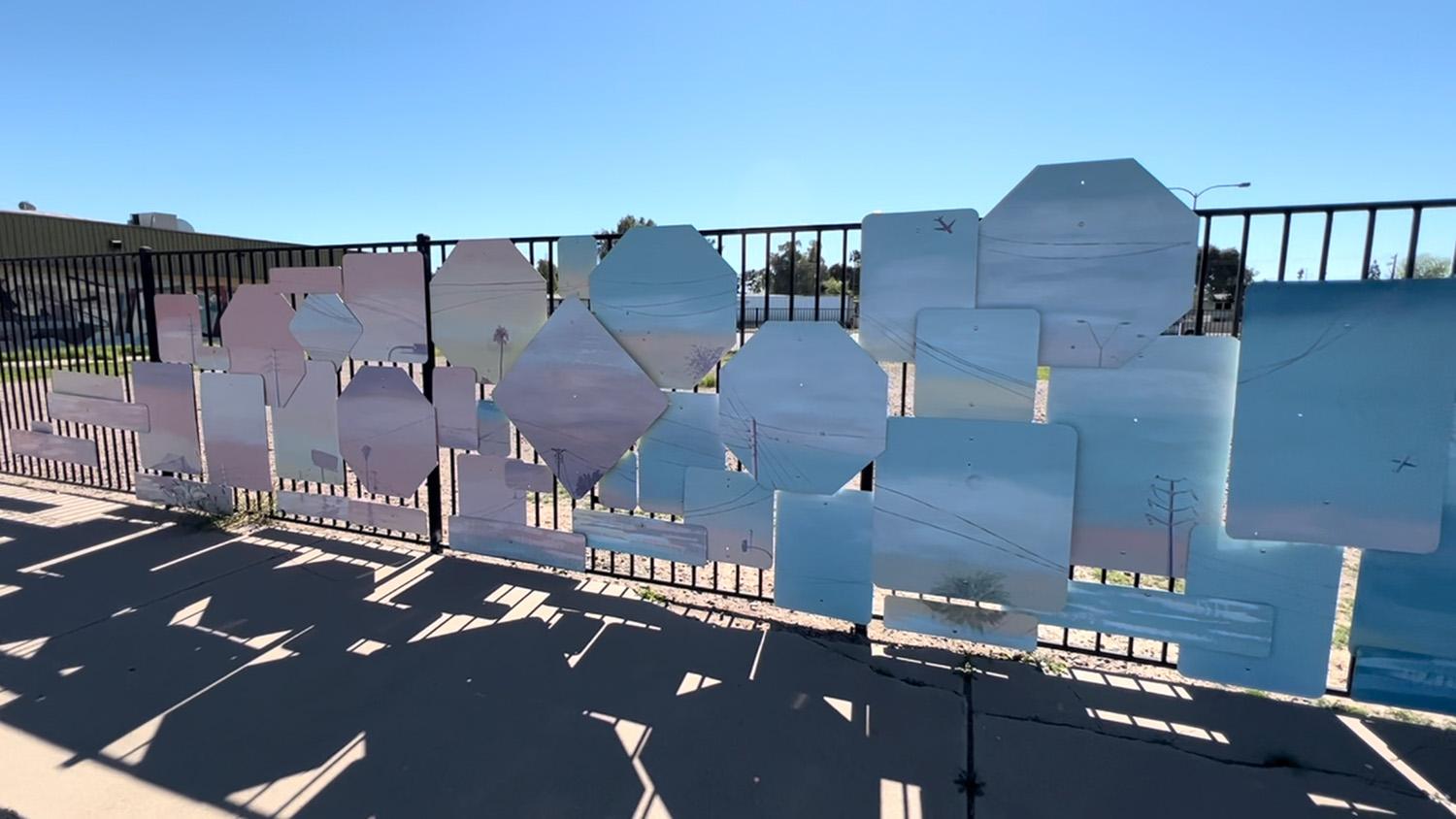 Tim Agne/KJZZ
Once a temporary installation on the north shore of Tempe Town lake, “Rise” by Laura Spalding Best found a permanent home at Danelle Plaza.

“We like to honor the kind of alternative, offbeat energy of the plaza. So it’s very eclectic and I would characterize it as alternative,” he said. “Danella Plaza has had kind of an experimental laboratory-esque kind of energy. And so we encourage artists to do what they want to do, and explore and kind of grow and reach a little further than what they would typically normally do.”

“Woo! Playboy Manbaby!” screamed the passengers in a car leaving Yucca Tap Room as the band warmed up.

We couldn’t put it better ourselves.