Tyler Watson is in your yard. He has had enough. And he is crossing his arms 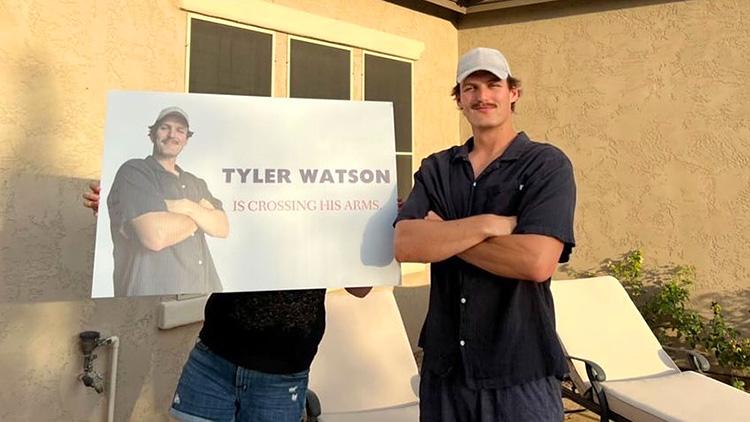 It's that time of year again — political yard signs are popping up all over the state. On the side of the road, in people's yards — you can’t get away from them. But if you live in Chandler, you may have spotted a sign that’s a real head scratcher.

“It’s just me crossing my arms, and I’m smirking, and it says ‘Tyler Watson’ in bold blue letters, and then right under it says, ‘is crossing his arms’ in red letters. And there’s no context other than that," Tyler Watson said.

Watson, a 25-year-old minor league baseball player, isn’t actually running for office — he’s just crossing his arms for all of Chandler to see. But why did he make the sign in the first place?

“The whole gist of the story was, I was driving down the street, and I saw some signs, and I thought it would be funny if my friends are driving down and they just randomly saw my sign. So I created the sign as soon as I got home, took a picture, and then I made it and then two days later I put it out and didn’t tell anybody," Watson said. "And so yeah, it’s like kind of just spiraled after that … When my sign first got really popular, it was in the Chandler, Arizona, Facebook group and someone sent it and they said, ‘Does anyone know what this is?’ … and all the comments were basically like, ‘I’d vote for him, blah blah, he’s gonna be a write-in.’

After the sign gained some popularity on Facebook and TikTok, people wanted to know where they could get their own "Tyler Watson is crossing his arms" yard sign, so Tyler created a website. Each sign costs $15, and Tyler said he plans to donate the profits to charity. He’s also been coming up with some other creative signs.

Amidst the politicians lobbying for your vote is a guy with two thumbs crossing his arms, or waving, or eating a quesadilla. And he doesn’t want anything but your attention — and maybe a laugh.

EDITOR’S NOTE: Due to an editing error, this story has been modified to correct the photo credit.