Download mp3 (7.37 MB)
Coverage of aging is supported in part by AARP Arizona 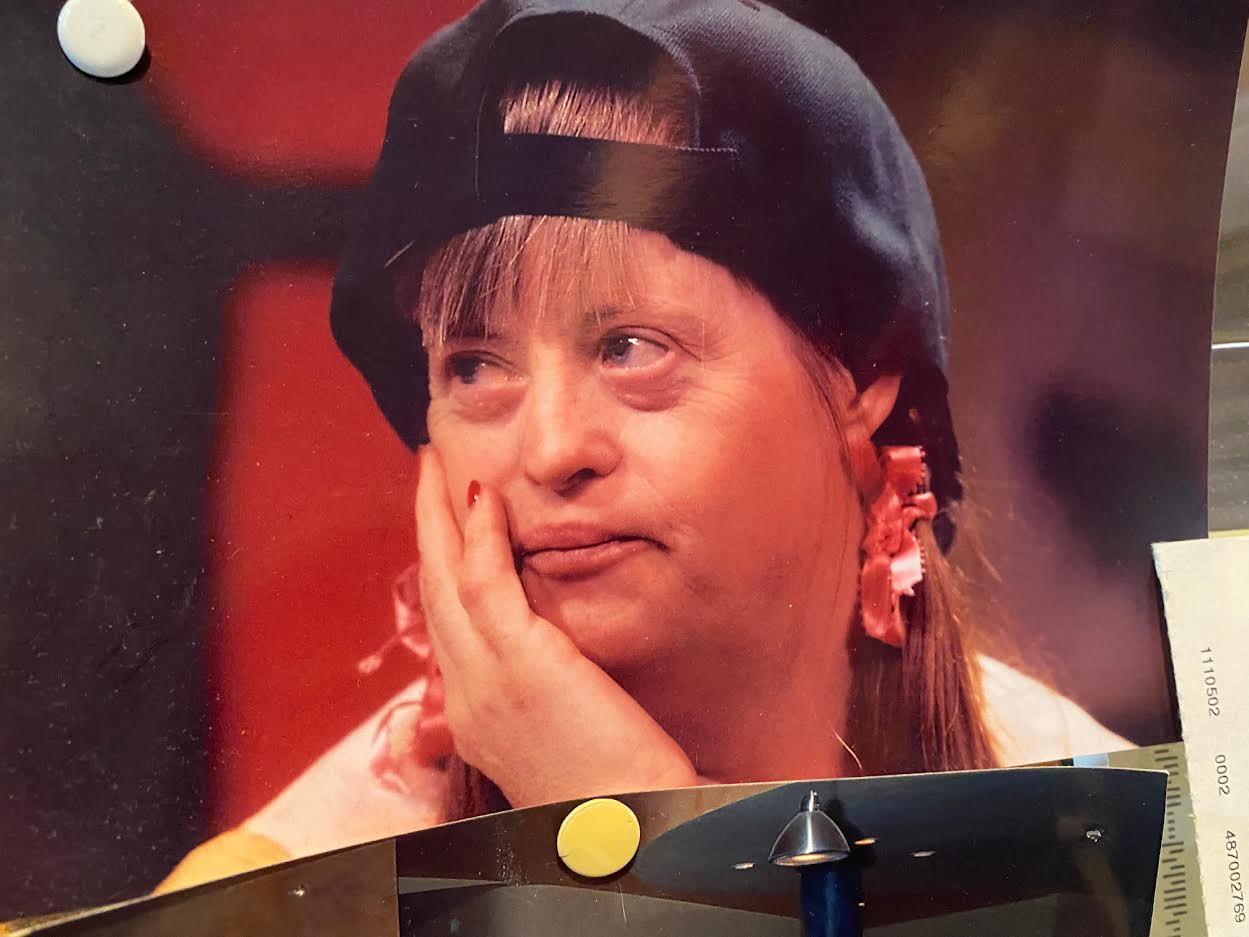 Kathy Ritchie/KJZZ
Molly enjoyed performing in plays. She performed in "Oklahoma," "Charlie Brown," "Cinderella" and "Footloose." She also loves music. Her parents say she used to play Abba and Kenny Rogers non-stop, but because of the Alzheimer's, she's lost interest.

When Molly Lawson was born in 1966, the obstetrician who delivered her was chillingly matter of fact.

"He said people like you don't keep children like this," said Doris Lawson, Molly's mother. "But we thought, 'Well, who else?' We're perfectly capable of taking care of her."

Molly was born with Down syndrome and in those days, families were often encouraged to send children born with an intellectual or developmental disability to an institution.

And then the pediatrician came in and said, ‘Oh, you're gonna love this baby! She does everything a baby does. She'll eat and sleep and poop and cry.’ And, so I thought, ‘Oh, OK, so I have permission to keep her.’ So I did." 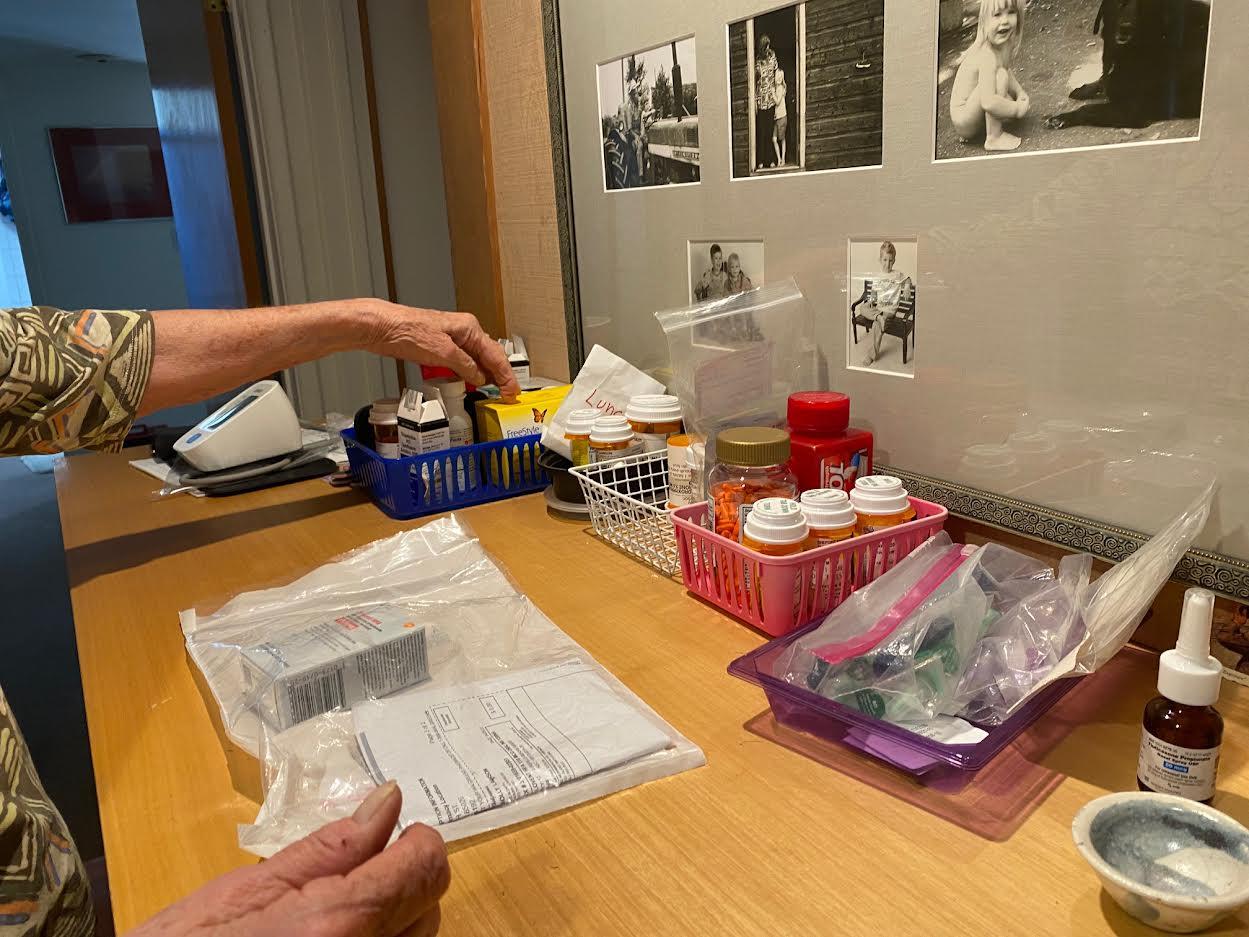 Kathy Ritchie/KJZZ
Michael and Doris Lawson prepare and administer all of Molly's medications, including insulin. Molly does have a caregiver who helps but she can't give out medications. It means either Doris or Michael always have to be home.

It seems incredible to believe that Lawson wasn't sure she was allowed to keep her baby girl.

"Well, I didn't realize that," she said. "The obstetrician was kind of saying, 'This is what you need to do.'"

Molly grew up with her mom, dad and siblings.

As an adult, Molly lived in a series of group homes. She eventually moved into an adult development home run by two caregivers. Doris says it was a great experience.

"They were just the nicest people and they loved her and she loved them. And they did all kinds of things together."

But Molly eventually started becoming more anxious and fearful. As a result she could become combative at times. She didn’t want to take her medication or would refuse to get into the car. When Molly was in her early 50s, she was diagnosed with Alzheimer’s disease. 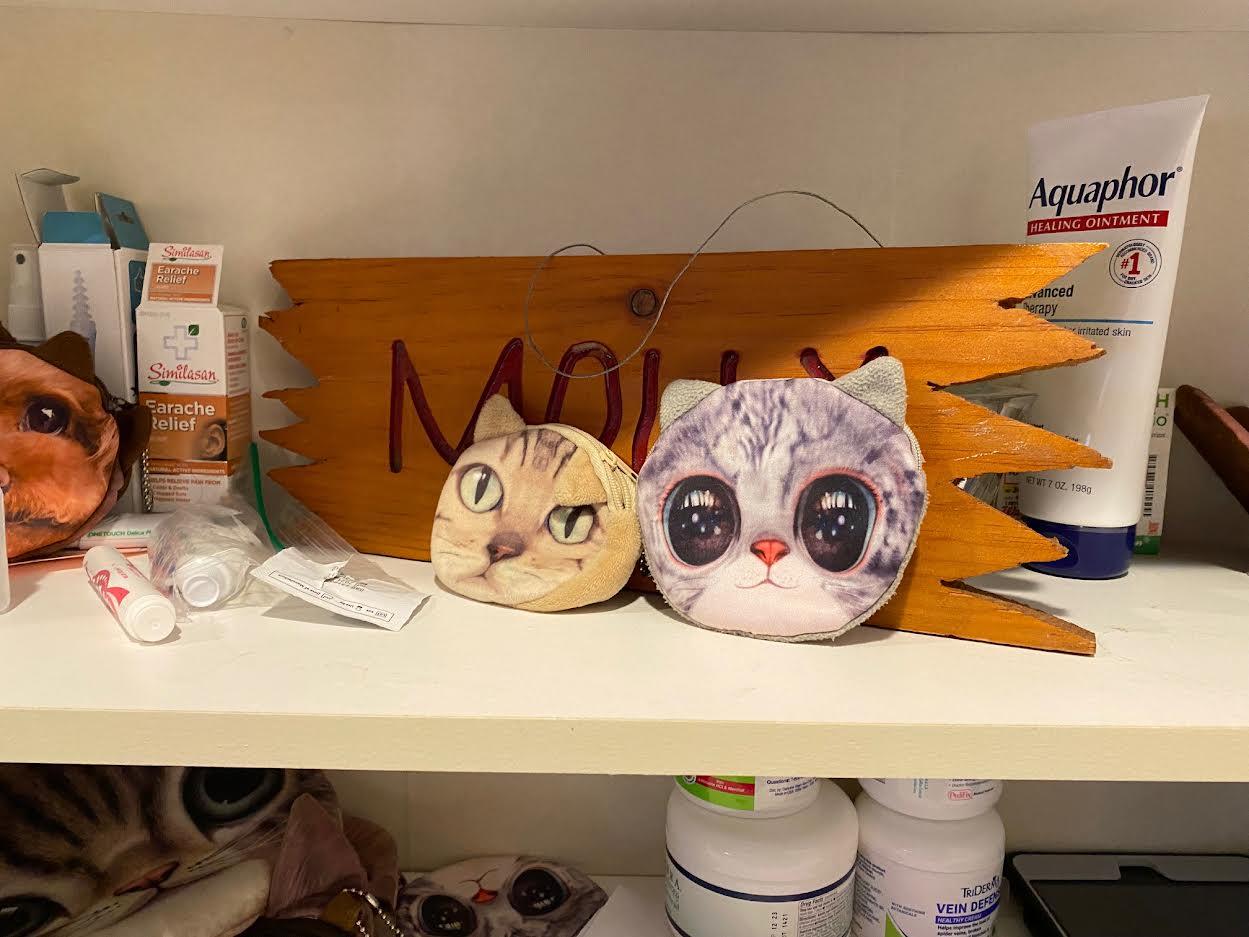 Kathy Ritchie
Molly loves cats. Her mother said she had several little cat purses in case she misplaced one. These now sit on a shelf in her bedroom.

"And so life became increasingly difficult for them and more challenging for her," explained her dad, Michael Lawson. "And whereas she had been so full of herself before that time, so completely interested; she'd have her suitcase packed and, you know, have a suitcase-ready-to-go type of attitude, is what she had."

Molly was still living away from home when she was hospitalized for pneumonia last September. She had also sustained several vertebral fractures due to severe osteoporosis.

It was then that her parents decided to bring her home. It’s a lot for the Lawsons, who are both in their 80s.

"We're doing this until we can no longer walk her up to the bathroom. We can make meals for her, which she enjoys," said Doris.

They also organize and administer her many medications, including insulin. Molly is also diabetic.

"I think one of us alone, we'd have a very difficult time doing it — just because it's so demanding," explained Michael.

"We're doing this until we can no longer walk her up to the bathroom."
— Doris Lawson

And round the clock, at times. Molly sleeps in a recliner because of her fractures. " Of course, we tip it back at night," said Doris, who sleeps in a twin bed alongside her eldest child.

They do have some help. Molly’s caregiver spends 40 hours a week with her. But there’s so much more to this story than just the physical toll of caring for their daughter.

"Are you prepared for your daughter to pass away before you?" I ask.

"Well yeah. I hope so. Because this isn't fun for her either," said Doris.

"I would prefer she dies before us," said Michael. "Just so that we're here to take care of her and make sure that everything is done as well as possible on her behalf."

Across the country, this is life for so many other families just like the Lawsons. 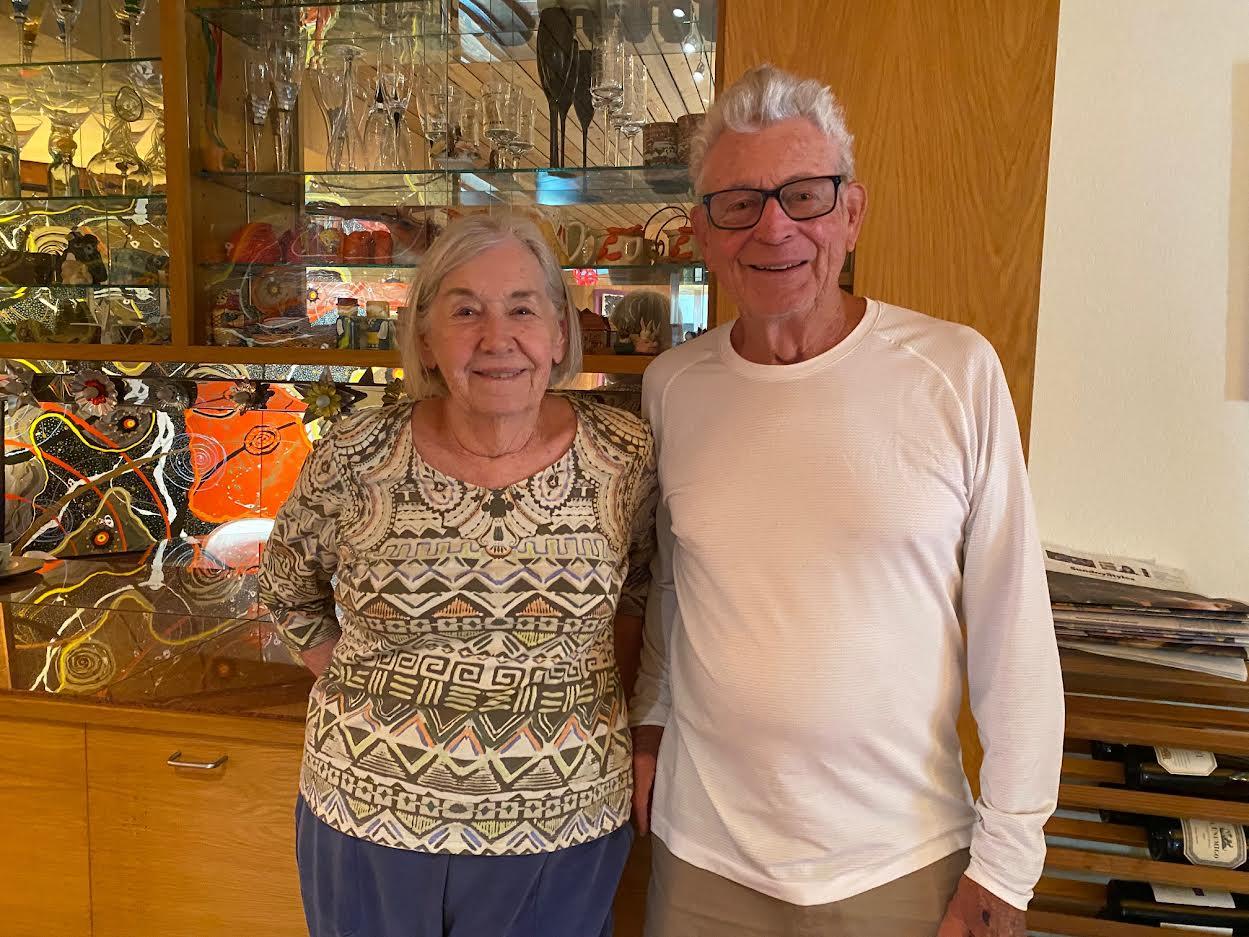 Kathy Ritchie/KJZZ
Michael and Doris Lawson welcomed their daughter Molly in 1966. "We took all the milestones when they came. We celebrated when she learned to walk. And when she said her first word and when she wrote her name — she was 4 years old," said Doris Lawson.

"It impacts our community in a way that it doesn't really impact any other health group," said Margot Rhondeau, the senior director of health and wellness at the National Down Syndrome Society in Washington, DC.

Last January, the Centers for Medicare and Medicaid Services, known as CMS, announced it would cover the costs of the controversial Alzheimer’s drug Aduhelm. However, only if patients participate in clinical trials. Excluded from that group? People with Down syndrome.

"Our community basically stood up and said, We're not going to accept this," said Rhondeau.

"I don't know any other group out there that you can say 90% of people are going to develop Alzheimer's."
— Margot Rhondeau, National Down Syndrome Society

Aduhelm is also incredibly expensive and potentially risky. Still, at this point, there is no way to stop or effectively slow Alzheimer's disease. Aduhelm represented possibility for some. So when CMS’s comment period opened up, roughly 1800 were about Down syndrome, said Rhondeau. It eventually removed the exclusion.

The fight is not just about Aduhelm

Hampus Hillerstrom is the president and CEO of LuMind IDSC Foundation, which works to accelerate Down syndrome research. He says rallying the Down syndrome community against the exclusion was critical for another reason.

"CMS decisions are made for a class of treatments, and there are three other Phase Three clinical trials," he said.

And if they are approved with potentially better clinical results than Aduhelm, "then we don't want to have a CMS decision that is problematic for a Down syndrome population for all four treatment approaches."

Because right now there is nothing for people living with both Down syndrome and Alzheimer’s. Long-term care isn’t really an option either as few places accept people with both conditions — leaving older parents, including some who have dementia themselves, or siblings, to navigate an uncertain future.