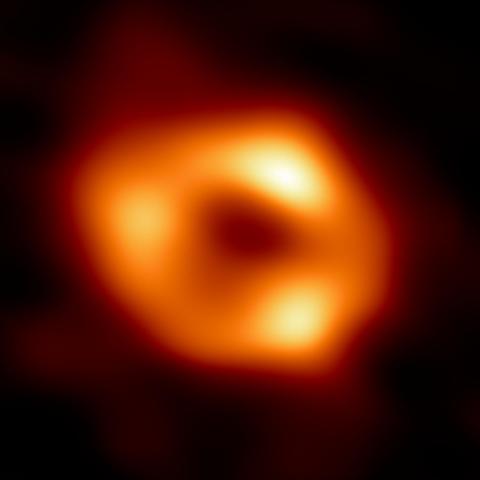 EHT Collaboration
Astronomers have released the first image of the black hole at the center of the Milky Way.

Astronomers have released the first image of the black hole at the center of the Milky Way.

The picture was unveiled Thursday by the international Event Horizon Telescope Collaboration.

Astronomy and physics professor Dimitrios Psaltis with the University of Arizona served as a founding project scientist. He said getting the picture required a telescope the size of the Earth.

"We did the next best thing, which is take every little telescope around the Earth we could find and connect them virtually with a super computer after the fact to behave as if it was a telescope the size of the earth, and that’s what we did," Psaltis said.

The University of Arizona provided two telescopes and data processing infrastructure for the images.

While you can’t see a black hole, you can see a dark region called a shadow surrounded by orbiting plasma.

The black hole is 4 million times the mass of the sun, and its diameter fits within Mercury’s orbit.

Except for what takes Mercury 88 days to orbit the sun, plasma orbits the black hole in a matter of minutes.

Psaltis says there were doubts in the team’s ability to get the picture.

“To look at the black hole at the center of  the Milky Way, you have to literally look through every single cloud between us and the center of the galaxy, which is a lot. And those clouds make the image blur a little bit.” Psaltis said.

Dmitrios added the measurements fell within Einstein’s predictions from 100 years ago, but also laid the foundation for physics to study high temperatures and plasma in the future.