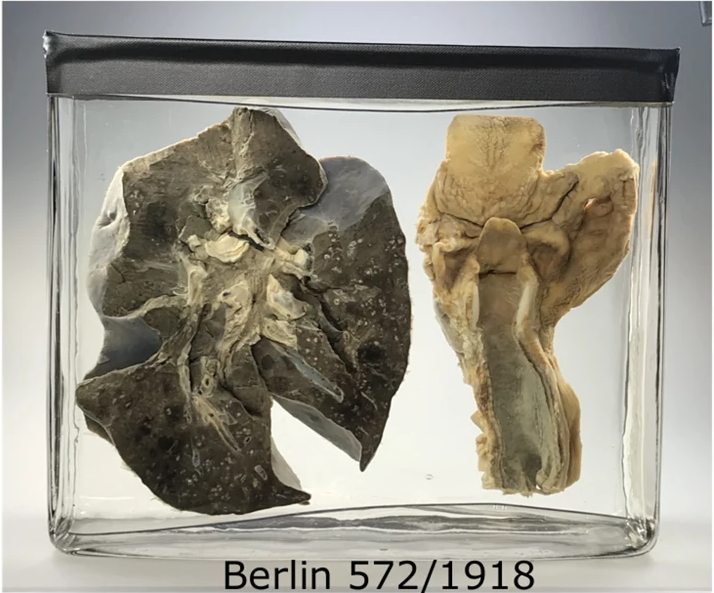 New research in the journal Nature Communications suggests a modern, seasonal H1N1 flu virus might be its direct descendant.

“The subsequent seasonal flu virus that went on circulating after the pandemic might well have directly evolved from the pandemic virus entirely — so, for all the eight segments of the genome — which contradicts the most recent hypothesis,” said co-author Sebastien Calvignac-Spencer of the Robert Koch Institute in Berlin.

Viral sequences from the early 20th are rare, but researchers managed to locate some preserved lung tissue stored in historical archives of museums in Germany and Austria.

"We were extremely lucky, because they had a handful of 1918 flu specimens that were really, really rare. And I said, 'Yeah, well, if we are going to start somewhere, technically, let's start with those,'" said Calvignac-Spencer.

Genomic analysis of the tissue suggests a modern seasonal flu of the H1N1 subtype descended directly from the Type A influenza that caused the 1918 pandemic.

"Of course, it's also a major limitation of this kind of research that we only have like very limited sampling. So we have to remain humble, and we consider all our results as provisional," said Calvignac-Spencer.

If confirmed, the provisional findings would contradict the prevailing model, which says H1N1 developed from reassortment, in which genetic segments are shuffled between different variants within a host.

"There's not any evidence for lineage replacement between the waves, like we see today with two different SARS-CoV-2 variants that replace one another," said Calvignac-Spencer.

Type A and B influenzas are the only two types that cause seasonal epidemics in humans, and only Type A causes pandemics. H1N1 is a subtype of A. The flu behind the 2009 pandemic, H1N1pdm09, was but one of many strains of H1N1.