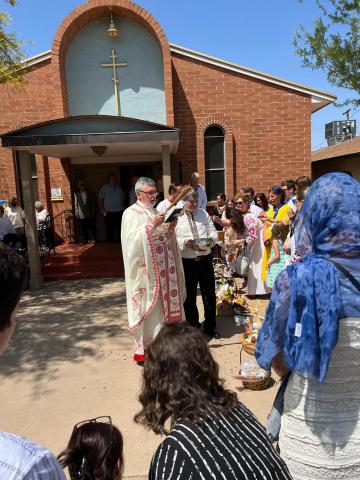 This year in the Orthodox Church, Easter was observed a week later than most other Christians and it was a solemn celebration at St. Mary’s Protectress Orthodox Church of Ukraine in downtown Phoenix where parishioners of the small church overflowed onto the sidewalks.

Outside is Larisa Szwez, chasing around her toddler son.

“This Easter Sunday feels wonderful because we are together, surrounded by community,”  Szwez said.

The war in their home country is on everyone’s mind and the last few months have been difficult to watch from afar for Szwez and her Ukrainian family.

“It’s been heartbreaking, it’s been gut wrenching, you see the things happening in the news and you kind of have to lift your head up and keep going on with your daily life and I think the hardest part for me is you look up and you kind of wish everyone was as angry as you are and it doesn’t feel like that’s the case–and that’s been really difficult.”

Also in the overflow is 22-year-old Olena Melnyk. She was born in Ukraine.

“I don’t think I’ve ever felt more like a foreigner than watching a place I was so familiar with being torn up in such a horrific way.”

Melnyk says as a young person, what’s happening to her birth country has helped raise awareness of other global issues and conflicts.

“I didn’t know anything about the Iraq war and I’m just realizing more about armed conflicts worldwide that you learn about. The biggest change since this happened to me personally, is I want to understand why these things are happening. Even if I can’t change them, I don’t want to pretend they aren’t happening.”

Parishioners begin to trickle outside and begin to line up the Easter baskets in the pathway of the church when the priest emerges with a blessing, waving an aspergillum, a liturgical implement used to sprinkle holy water, while chanting prayers in Ukrainian.

Ludmilla Quinn and her husband came from Mesa, where in years past they celebrated Easter at the Russian Orthodox church. But not this year.

“I like the liturgy coming in Ukrainian language. This is close to me," said Quinn. 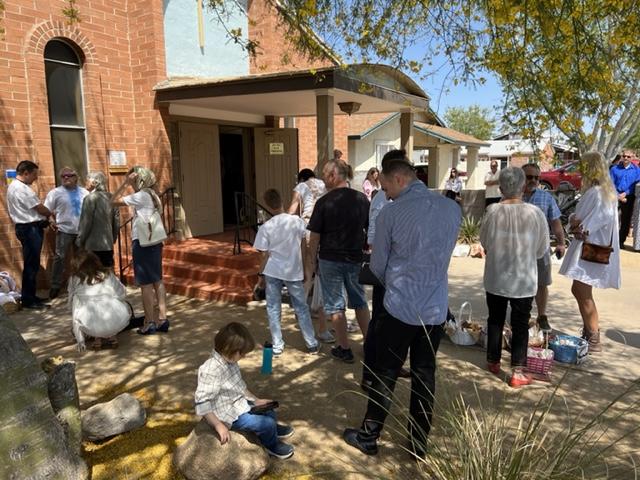 Like many Ukrainians, she has close ties to many in Russia. While her hometown of Kharkiv was being overrun, Quinn sent a message to a close friend in the Russian capital and was surprised by the negative response from someone she thought might be sympathetic.

“She lives in Moscow. And I sent her a video from Moscow of people protesting against Putin, against war. And she answered me, [if] you’re not Russian, you’re nobody!”

Another Ukrainian-born Arizonan, Miroslav Yarema, has also just emerged from the small church. He said the priest’s message was a bit different this year.

“Besides the blessing of the bread, we prayed for our soldiers to be well and not to be harmed and for people to be safe and for this madness to be stopped, finally," Yarema said.

Like many of the others here, Yarema has deep ties to Russia and went there for school when he was younger.

“They’re just jealous of the Ukrainians and how they live and the way they live. It’s really stressful. I cannot express what I am feeling and what I thinking right now, but I think that we will win," Yarema said.

Donations to help Ukrainians can be made directly to St. Mary’s Protectress Orthodox Church of Ukraine.

EDITOR'S NOTE: This story has been updated to clarify when Easter falls on the Orthodox Church calendar.