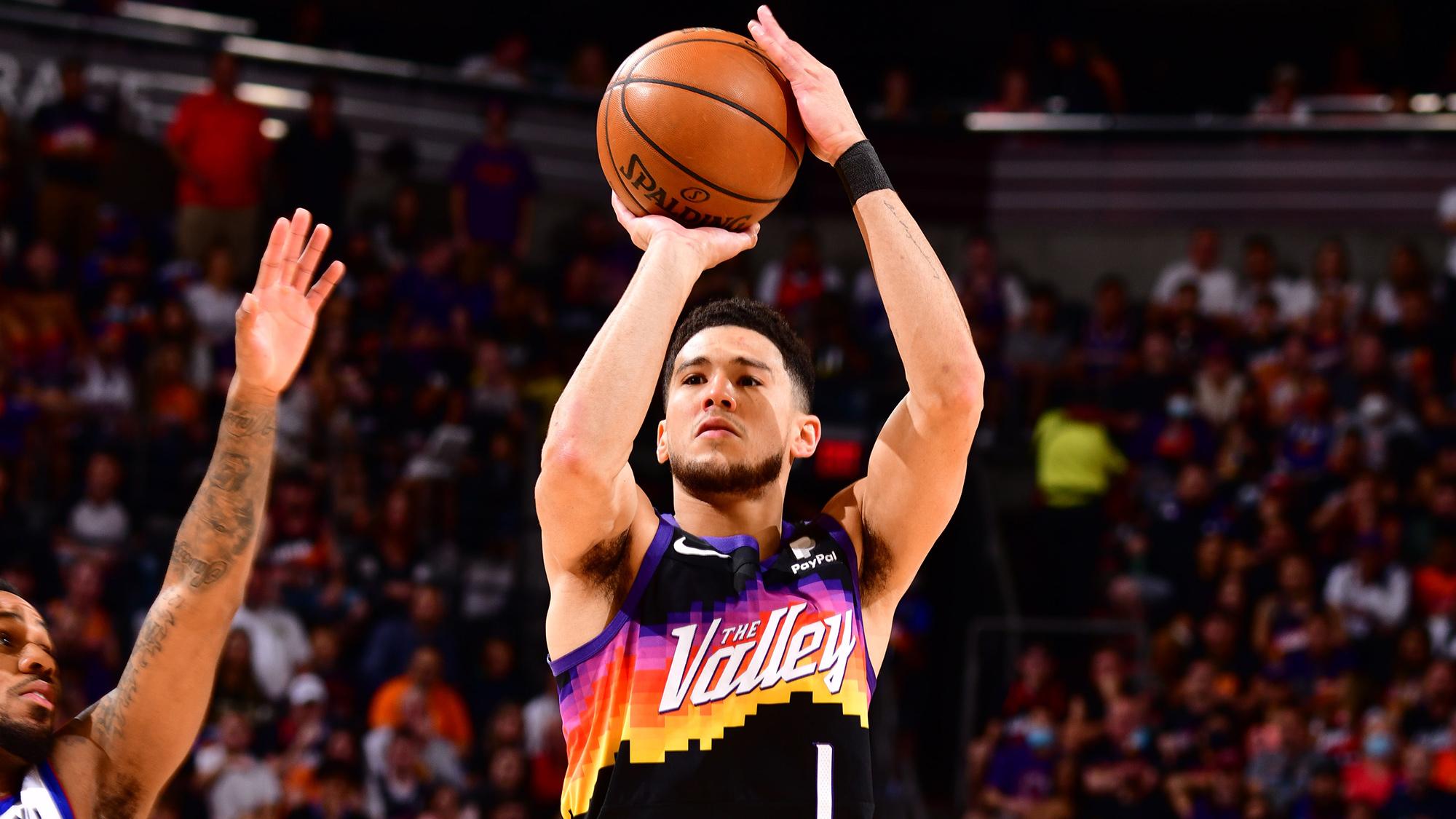 Barry Gossage/NBAE via Getty Images
Devin Booker takes a shot against the Denver Nuggets during Round 2, Game 2 of the 2021 NBA Playoffs on June 9, 2021 at Phoenix Suns Arena.

Brandon Ingram’s rolling, Devin Booker’s hurting and the New Orleans Pelicans made it clear that this first-round playoff series will be a fight for the top-seeded Phoenix Suns.

Ingram had a fantastic all-around game with 37 points, 11 rebounds and nine assists to lead the Pelicans over the Suns 125-114 in Game 2 on Tuesday, pulling off the impressive road win to tie the series at 1-all and earn their first postseason victory since 2018.

As the final buzzer sounded, Pelicans forward Larry Nance Jr. set the ball down on the court and sprinted off the court into the tunnel with his teammates. Game 3 is on Friday in New Orleans.

Not only did the Suns lose the game, but they’re unsure about the health status of Booker, the All-Star guard who was spectacular in the first half with 31 points before leaving with right hamstring tightness in the third quarter.

The Suns — who led the NBA with a franchise-record 64 wins during the regular season — trailed 77-74 when he departed.

“We’ve got guys that are more than capable of stepping up,” Suns guard Chris Paul said. “Book was killing. He was having a big-time game, but it is what it is.”

Paul finished with 17 points and 14 assists but shot just 5 of 16 from the field.

Phoenix kept the game close without its leading scorer and even took a lead early in the fourth, but the Pelicans rallied, getting big 3s from Jose Alvarado, CJ McCollum and Ingram to take an advantage they wouldn’t relinquish. McCollum finished with 23 points.

“This is one of his best and it was on a big stage,” Pelicans coach Willie Green said. “I’m proud of that young man. He works his tail off, he’s a great teammate, high character, high IQ and he put it on display tonight.”

The Suns certainly missed Booker in the final quarter, but spotty defense throughout the evening was a bigger culprit in the loss.

The Pelicans admitted they were a little surprised by the intensity of their Game 1 loss, especially during the first half when they fell into a 19-point halftime hole. They didn’t make the same mistake on Tuesday, taking a 30-28 lead after one quarter.

The Suns rallied for a 61-56 halftime advantage thanks to Booker scoring spree. He scored all of his 31 in the first half on 12 of 18 shooting, including 7 of 10 from 3-point range. He hit a 30-footer just before the halftime buzzer after the Pelicans inexplicably left him open.

Booker left the game and went to the locker room late in the third quarter. On the possession before he departed, he jumped to contest a fast-break shot by New Orleans, but it wasn’t immediately clear that he was hurt.

He returned at the beginning of the fourth quarter wearing warmups and never re-entered the game. Booker missed multiple games earlier in the season with a hamstring injury.

One of the more entertaining exchanges of the game came in the third quarter when the Suns’ Mikal Bridges and Pelicans’ Jaxson Hayes swapped spectacular blocks on back-to-back possessions.

Bridges struck first, swatting Hayes’ turn-around jumper to start a Suns fast break. Bridges looked like he might finish with a dunk a few seconds later but Hayes recovered for his own block, trapping the ball with two hands against the backboard.

Booker scored 16 points in the first quarter on 6 of 10 shooting, and his final bucket was a heartwarmer.

The guard hit a tough corner jumper just before the buzzer and fell to the floor next to the crowd. Booker looked up and there was a baby in the lap of a man right next to him, so he gave the baby a fist bump before running back to the huddle.