When Russia invaded Ukraine, this American had a harrowing journey to escape the country 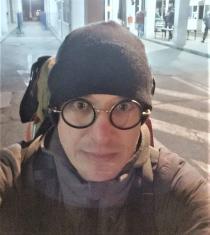 More than 4 million refugees have fled Ukraine since Russia invaded its neighbor in February. But it’s not just Ukrainians rushing to leave the country.

Forty-seven-year-old Kevin Raison moved to Kyiv from Seattle last fall — for both love and work — and had just finished the process of establishing his Ukrainian residency about a week and a half before the war started. But once the invasion was underway, he knew he had to get out.

"I was not in Kyiv at the time — I was actually in Kharkiv on business," Raison said. "And my wake-up call on the day the war started was at about 5 a.m., and it was to the sound of Russian missiles exploding not too far away from my hotel."

Raison, whose mother lives in the Valley, says most people in Ukraine had been watching Russia anxiously and waiting for something to happen. But he says even though lots of people were expecting an invasion, it was still a shock when it happened. His first move? Driving more than 240 miles back to Kyiv.

"When I finally got to my house, I had actually already packed my apartment before going to Kharkiv. So I had taken all of my possessions and kind of divided them into sets of things of descending order of importance and packed those in separate bags, thinking that if something did happen, I might need to abandon everything down to what I could carry on my back," Raison said.

Raison says once he got his stuff, he was back on the road, heading west toward the Romanian border.

"There’s a contrast: Getting into Kyiv was the easiest drive I’ve ever made, because there was absolutely no one on the roads once I got out of Kharkiv," Raison said. "On the way out of Kyiv heading west, however, was a very, very different story. There was a traffic jam that was three or 400 kilometers (248 miles) long."

After he got through that, he headed through another town on his way to the border. That night, he started to hear air raid sirens.

"As I’m driving through the downtown, people are just throwing themselves to the ground as the sirens are going off. And as I’m beginning to exit the downtown area, roads start exploding at various places beside me and ahead of me. And my instinct was just to hit the gas and go as fast as I possibly could," Raison said.

Raison says once he got close to the Romanian border, he had to get rid of the car he was driving, which means he once again had to pare down his belongings. He says it was then, with his stuff spread out on the pavement in a parking lot, that he had a bit of a breakdown. He says he was angry in a way he’d never been before — he thought about going back to Kyiv to fight, which he says is out of character for him. But a friend in the U.S. talked him out of that, and he continued on to the border.

When he got there, though, he realized the Ukrainian guards weren’t letting men through — the government had ordered all males between the ages of 18 and 60 to stay in the country to potentially fight. After a number of hours had passed, he says he heard something different — a couple of men speaking English. It turns out they were Romanians, who’d gotten stuck in Ukraine while on business.

"So, the three of us decided we were gonna team up and do whatever it took to just force our way out to safety. So the last cycle before I managed to get through, they let all the women and children go and then the number of men had actually shrunk at that point — so many people had just given up and wandered back to the city — but we stuck it out and the three of us sort of linked arms, grabbed each other’s backpacks and they finally announced, ‘We’re gonna let a small group of men through.’ And so the three of us as a bloc just managed to get up to the front and push our way to the head of the line and we got through," Raison said.

Raison says once he got into Romania, he was in shock and took a couple of days to rest. But he says one morning, he woke up and decided he needed to go back to Ukraine — not to fight, but to help.

Raison and his partner started a nonprofit called the Sunflower Project. He says it’s bringing supplies from the U.S and the European Union (EU)— specifically MREs, which are self-contained meals often used on battlefields; subcutaneous microchips, allowing Ukrainians to chip their pets, which is a requirement for them to enter the EU; as well as other veterinary supplies.

And he says they’re also working on bringing in a special kind of bandage that helps speed up the blood clotting process. In fact, Raison said he’s in Lviv, Ukraine, this week, working with nongovernmental organizations (NGOs) and Ukrainians to assess their needs, and how best to meet them.