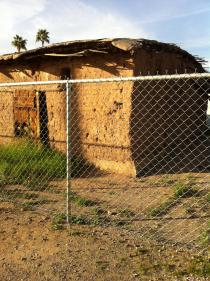 If you want to go really old-school in Phoenix, Jim McPherson, board president of the Arizona Preservation Foundation, said there is one place you have got to go.

"We’re looking at an adobe structure that’s here in South Phoenix, in the warehouse district, that is one of the oldest remaining adobe structures in the city of Phoenix," explained McPherson.

McPherson and architect Christina Noble have met me at First Avenue and Sherman Street at the Duppa-Montgomery Homestead. The best guess is that it was built in 1885. McPherson said lots of Phoenix’s early settlement happened in this part of town, since it is close to the Salt River, and he said this property in particular is notable for another reason.

"Many people say that this was one of the first historic preservation projects in the city of Phoenix," said McPherson.

McPherson said a group of preservationists in the 1940s started raising money to refurbish the building. Noble, who is also a member of Phoenix’s Historic Preservation Commission, said the city’s Parks and Recreation Department bought the property later in the decade and leased it to another preservation group.

"And they took care of it throughout the '50s, and they were the ones that actually did a number of renovations that some may find questionable historically," said Noble.

"They actually put a concrete floor in there that’s not original, you can see some asphalt shingles up on top there, that was also not original," said Noble. "They placed a fireplace on the interior that clearly is not part of a hay or dairy facility."

Noble said there was talk in the 1980s and 1990s about tearing the building down, but the Parks and Rec Department which still owns it, checks on it from time to time to make sure it does not deteriorate, and to be clear, the building doe not look fantastic. There is a chain link fence around it, and McPherson acknowledged it is still somewhat in disrepair, but he said adobe is a unique material and believes the building could be made functional. He cites a similar building in the same neighborhood.

"When I last toured the house, we went inside, it was 106 degrees outside, it was cool inside. There’s no electricity, there’s no air conditioning, but it was cool," said McPherson.

"Christina, as an architect, what stands out to you about this building? What do you think is cool and worthy of, besides the fact of how old it is, what makes it worthy of being saved?" I asked.

"Obviously, the history, just in and of itself, is a beautiful story, but I think the ocotillo roof is definitely a beautiful element, and the wood doors have a unique quality to them, as well," said Noble. "And, how Jim was talking about the adobe, it’s just so native here, literally and part of the story. It’s built from the earth right there on the site, and it just creates a beautiful texture on the walls and it’s just a fantastic building material, as well."

"What does it look like on the inside?" I asked.

"It starts kind of low, but it has a relatively lofted ceiling, it’s a nice height of the ceilings, and you have the exposed wood on the inside, and there’s two small rooms side by side and concrete floors, and when we visited, you walked into the first, and it was much more light, because you had the doors open, and then you walked into the second and it was very dark, and you had the dramatic quality of the light coming in through the turret," Noble explained.

"From an architectural standpoint, are there ways that you could, on the exterior, make it so that it’s okay for someone to work in there while still maintaining its historical integrity?" I asked.

"I think you could definitely come up with some unique solutions that help protect the existing building, while also preserving that history. On some projects that I’ve worked on, you sort of design kind of like a box within the box, you keep the existing integrity of that existing structure, and you kind of protect that and then you build within it," Nobled described. "You could also imagine the reverse, imagine you talk about the sort of glass skyscrapers beyond. What if you just sort of encased it in this perfect little glass box to protect it, as well, as another idea?"

It is a bit surreal to see this short adobe building with the downtown skyline at the top of your line of sight. McPherson said the building is a valuable asset.

McPherson said his group is working with other preservationists to try to find money to rehab the Duppa-Montgomery Homestead. That cash would most likely have to come from private sources.