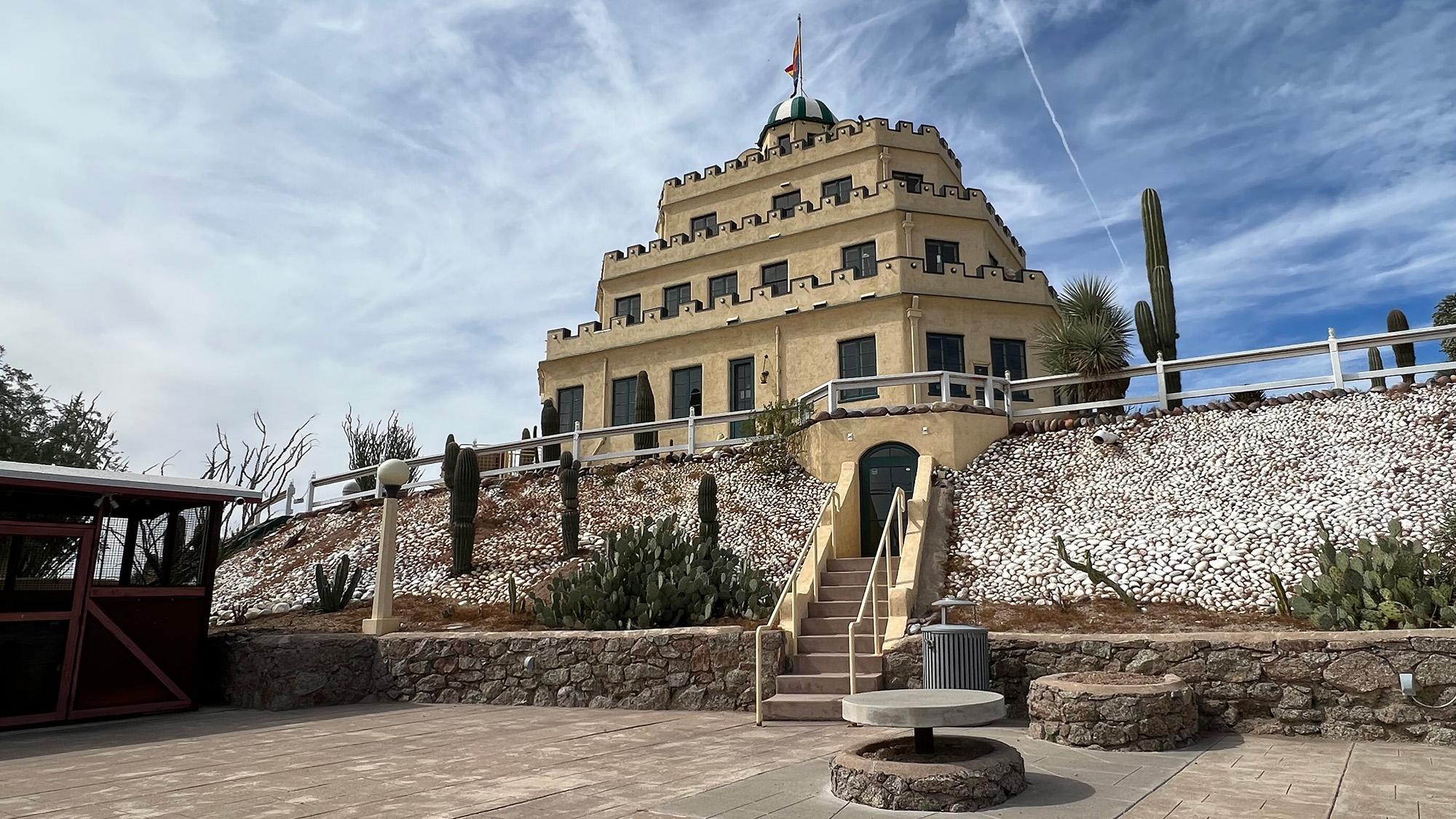 Tim Agne/KJZZ
A view of Tovrea Castle looking up from the East Patio.

Tiny Desert Concerts are back with a performance from Phoenix singer-songwriter Danielle Durack at Tovrea Castle. Here’s some more information about our iconic venue.

Phoenix may not have a history of monarchs and royalty, but the city is home to a castle fit for a queen. In the case of Tovrea Castle, the queen was Della Gillespie Tovrea Stuart, and instead of knights and a drawbridge, she protected her property with sharp wit and a shotgun.

You’ve likely spotted the wedding cake structure from the 202 freeway. A medieval-esque castle on the outside and a home on the inside, the nearly century-old building tells the stories of three families, each with their own hopes for the property.

The site was originally homesteaded in 1907 by the Warner family, according to the Tovrea Carraro Society.

Two decades later, Italian immigrant Allesio Carraro bought the property with dreams of opening a hotel and selling home sites in the surrounding area. The idea was that after people stayed at the hotel, they would fall in love with the desert landscape and settle nearby.

But the hotel never opened. By the time Carraro was ready to welcome guests, the Great Depression hit. Carraro had to sell his precious 14-month project less than a year after finishing it.

In 1931, E.A. Tovrea and his second wife, Della, purchased 44 of the 277 acres owned by Allesio Carraro, including the hotel/castle. The couple moved into the castle, becoming the first people to actually live there. Although E.A. died within a year of the purchase, Della lived in Tovrea Castle until her death in 1969.

Legend has it that Della used to sit on the front steps of the castle with her caretaker and a shotgun to keep coyotes — and fence-hopping teens — away, according to Tamera Zivic, president of the Tovrea Carraro Society.

The City of Phoenix bought the property, including the castle, from the Tovrea Family Estate in 1993. The only way to get inside the castle is to purchase tour tickets via a lottery system — or become a volunteer. 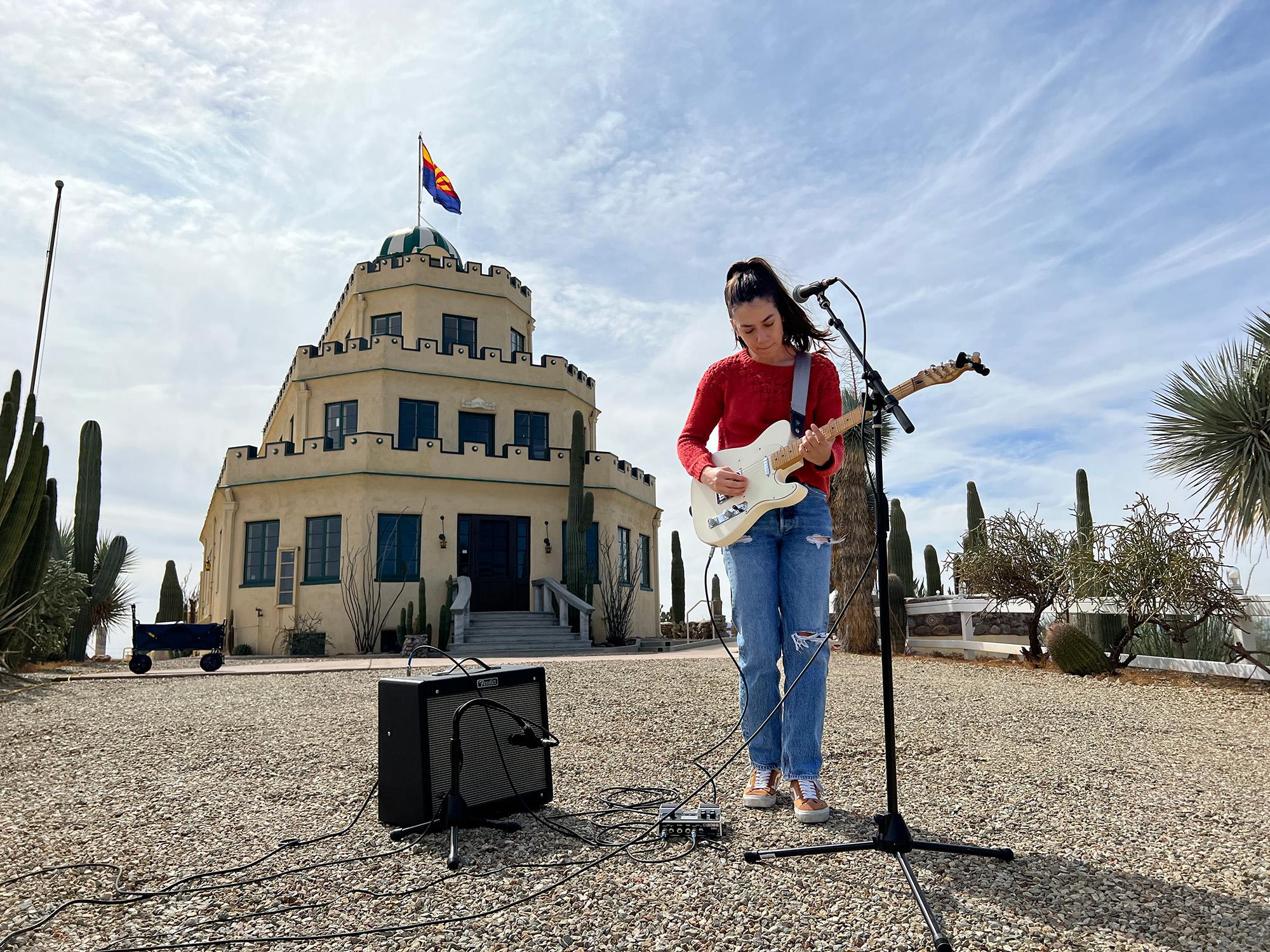 Tim Agne/KJZZ
Danielle Durack tunes up for her Tiny Desert Concert at Tovrea Castle on Feb. 28, 2022.

Zivic grew up near Tovrea Castle but never got a look inside. To satisfy her own curiosity, she signed up to volunteer.

Turns out, the castle’s interior is shockingly different from the outside.

“Inside it’s really a beautiful warm home with wood floors and stenciling, and you just get the feeling that there was a lot of love in that place and that there [were] a lot of good times,” Zivic said. “It really does carry the lives of all the people that have walked through there.”

She said her favorite part of volunteering is getting to see the castle early in the morning, when it’s still dark.

“It’s really wonderful to be there and be able to just mosey around on the property,” Zivic said. “It’s just really peaceful.”