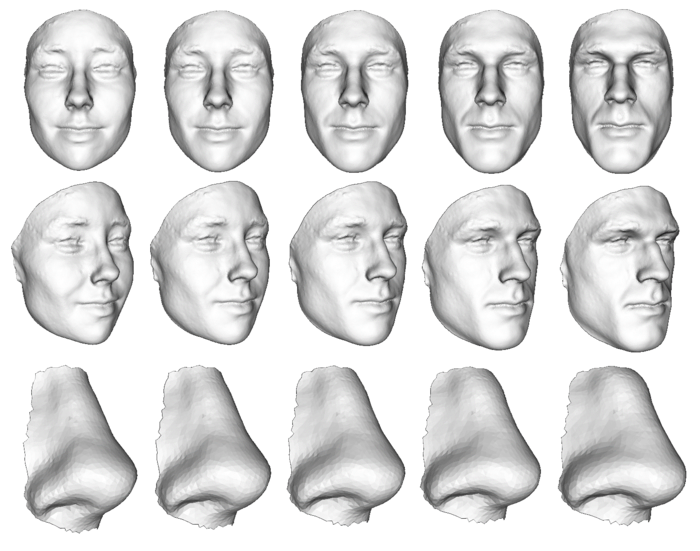 UCSF.
An example subject (center column) that has been transformed to have a more masculine (right) and more feminine (left) shape, leaving overall size unchanged. Bottom: The same shape transformation process applied to the nose region of the same subject.

Plastic surgery can adjust facial features to better reflect gender identity. But what does it mean to make a face more "male" or "female"?

"We were able to prove that there is biological differentiation of these different areas of the face between the sexes, to exemplify that surgical changes need to be made of each of these areas in order to give a change that is truly feminine or masculine," said senior author Dr. Rahul Seth, a facial, plastic and reconstructive surgeon at UC San Francisco.

When researchers analyzed 3D scans of more than 500 males and 1,000 females, they found one-third of variations in the forms of facial features were linked to biological sex.

Seth said he hopes the data will inform patients and surgeons, but also influence insurers and policy makers.

"To use this, along with further outcomes-based research, to be able to support our transgender and gender-diverse populations in obtaining the facial care that they need," he said. "It's not just the brow surgery or the jaw surgery that needs to be covered; it's many aspects of the face that deserve attention and coverage.

The study included only people of European-Caucasian ancestry. Seth and his colleagues plan to expand their work to include other races and ethnicities, but he said the process will take some time.

He added that, although helpful, such studies might not be necessary because the current findings don't just look at isolated features, but rather relationships between them.

"This analysis accounts for variations of, let's say, the nose with how the eyes vary. So it's not necessary that we need a background of every ethnicity; we see patterns that are more, you could say, global," he said.