The Hubble Space Telescope has set a new record for the most ancient star ever observed. The scientists nicknamed the star "Earendel," from an Old English word meaning "morning star" or "rising light."

"We think the very first stars formed during maybe the first 200-300 million years. And now we're seeing a single star 900 million years after the beginning," said co-author Rogier Windhorst of ASU's School of Earth and Space Exploration, who has worked with the Hubble for almost 35 years.

"We have gotten discovery after discovery on this telescope — it's unbelievable — including things that we never expected it would do," he said. 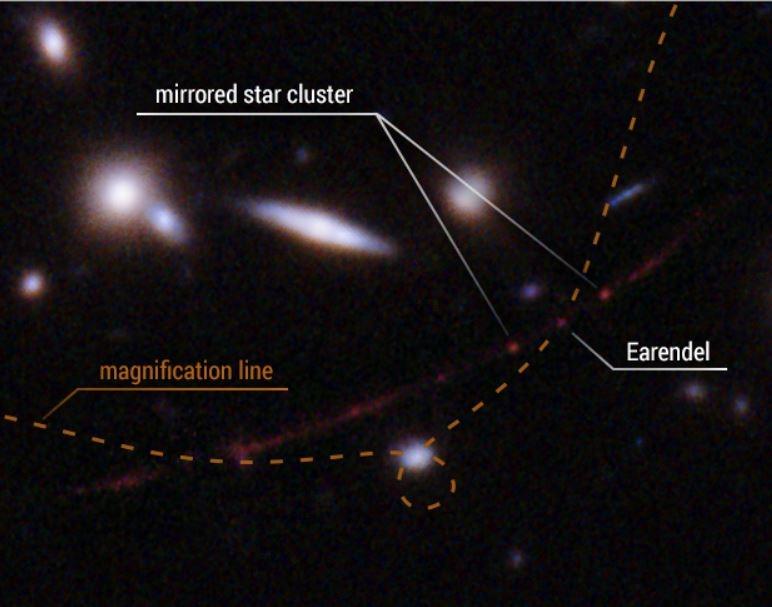 NASA, ESA, Welch (JHU), Coe (STScI), Pagan (STScI).
Earendel's position along a magnifying ripple in spacetime (dotted line). Note the cluster of stars mirrored on either side of the line of magnification.

Like a faded photograph, the ancient universe tends to look dim and smudgy, with the oldest stars too dim to be seen at all.

The milestone observation, reported in the journal Nature, was made possible by a lucky cosmic alignment: Between Earth and the galaxy that houses Earendel stretches a web of gravitational lenses that magnify and brighten the star a thousand fold.

That lets Hubble see back nearly 13 billion years to the universe's toddler days.

"We had seen stars magnified at these very lucky locations, but not at such great distances — more like halfway between us the Big Bang, five, six, seven billion years back in time. But we've never seen one within the first billion years. So Hubble really broke a record here," said Windhorst.

The previous Hubble record involves a star less than one-third that far.

“We had no clue though that Hubble would be able to see stars, single stars, within the first billion years. And that's only possible due to this unique lineup of the stars in this gravitationally lensed field,” said Windhorst.

Earendel might be a single star or a binary system: Most stars with masses greater than 15 times that of Earth's sun have a dance partner, and the authors estimate Earendel tips the scales at 50 solar masses. That also puts it in contention to be the accretion disk of a black hole.

The James Webb Space Telescope will study the star in greater detail to determine its temperature and makeup. According to current cosmology, a first generation star should consist almost solely of hydrogen and helium.

"We hope to see the signatures of just hydrogen and helium and no other chemical elements. If it contains a little bit of signature for say, carbon or silicon, we can say, 'Well, it was not the very first generation of stars; it may have been the second generation,'" said Windhorst. 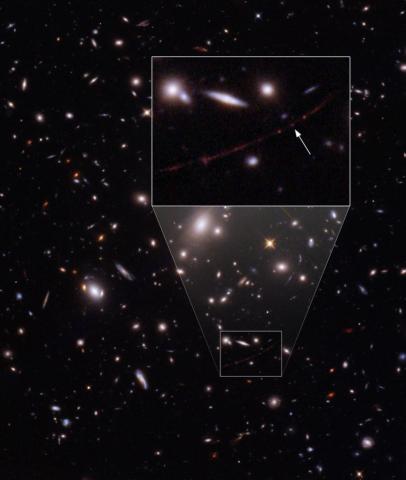 NASA, ESA, Welch (JHU), Coe (STScI), Pagan (STScI).
The star, nicknamed Earendel (indicated with arrow), is positioned along a ripple in spacetime that gives it extreme magnification, allowing it to emerge into view from its host galaxy, which appears as a red smear across the sky.
Science