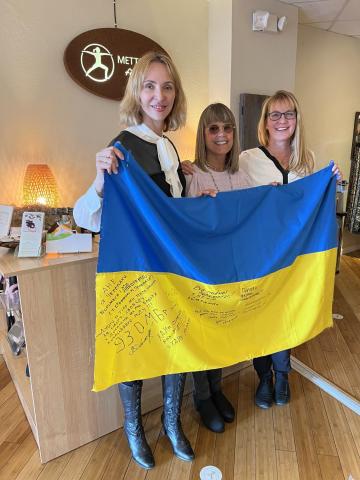 Zuzana Kolinkova isn’t Ukrainian. But she grew up not far away in the former Czechoslovakia, a neighboring country that also suffered in the Soviet bloc under the thumb of communist Russia.

“The communist era was just for 40 full years, but the imprint is there still," Kolinkova said.

Kolinkova, whose family still live in what is now the Czech Republic, says she learned at an early age what repression was all about.

“There are a few things that really stood out for me as a kid. One of them was the closed border. You cannot leave the state, period. People who attempt to leave the state have been shot," she said.

Once the Soviet Union collapsed, she found her way to the United States where she had a successful business career, eventually landing in Arizona. Here, she pursued her passion by opening a yoga studio in the Arcadia section of Phoenix, fulfilling the dreams of a beloved grandmother.

“Even yoga was not allowed. My grandmother was a great yoga enthusiast, and she could not practice,” Kolinkova said.

Through her studio, she met others in Arizona with a similar background, including the Ukrainian-born Olya Johnson.

“Apparently, there is a very strong community, and right now it is more united than ever," Johnson said.

Johnson, who also came to the U.S. for love and work, has lived in Arizona for more than a decade, and only recently found out there are many more like her in the Grand Canyon State.

“It is amazing. And I just want to stress that the support is not only coming from the Ukrainian community, But from every single Phoenician (and) Arizonan that is living here,” Johnson said.

Feeling she had to do something to help her friend Olya and all Ukrainians fleeing war, Kolinkova and her yoga studio manager Dresden Osterman devised a plan to amplify their voices.

“I just felt like some exposure may be helping other Arizonans learn a little bit more about the plight and how it could trickle down and impact us all,” Kolinkova said.

The women decided to hold a fundraiser for Ukrainian refugees that will take place this evening.

“It’s important that we do let other Ukrainians know that they’re not alone and that we’re supporting and doing what we can to help,” Osterman said.

Johnson says the last two weeks have been nerve wracking for her as she constantly checks on the status of loved ones back home.

Johnson is grateful for the help in getting the word out about their plight and the plights of millions of others in Ukraine.

“Being a foreigner coming into this country, sometimes it is hard to see outside of your daily life, outside of your ZIP code, what is happening. What I see now is what my grandfathers told me about World War II,” she said.

Kolinkova says she’s happy to use her yoga studio as a platform for the cause of helping others in need.

“It really gives me a wonderful reach and ability to speak up for specific causes and charities, and raising awareness," Kolinkova said.

"It really gives me a wonderful reach and ability to speak up for specific causes and charities, and raising awareness."
— Zuzana Kolinkova

And in this case, Kolinkova believes nationalities shouldn’t matter.

“I don’t really think it necessarily has to be communities connected by nations that are supporting it,” Kolinkova said. “But just from a humanity standpoint, standing up because this needs to be stopped right now, right in the tracks, before we start asking what country is going to be the next one.”

Where does the resolve come from? Four-hundred years of history and repression.

“Every single time, we were told we were brothers and that you do not exist as a nationality. I’m proud to be Ukrainian. I’m proud to be of the nation that we are. That we are not scared, and will stand our ground until we die,” Johnson said.

The fundraiser takes place on Friday evening from 6-7 p.m. and features a live music flow. View it virtually and contribute at NewMettaYoga.com. All proceeds go to the Ukrainian Women’s League and St Mary’s Ukrainian Orthodox Church in Phoenix.