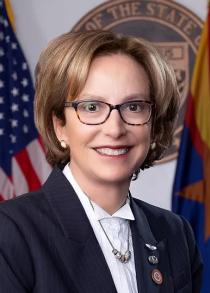 Arizona state senators decided Tuesday to do something they’ve never done before: censure one of their own.

By a 24-3 margin, lawmakers voted to censure Sen. Wendy Rogers (R-Flagstaff) for "conduct unbecoming of a senator.” That included "publicly issuing and promoting social media and video messaging encouraging violence against and punishment of American citizens."

Only Rogers and Republican Sens. Nancy Barto and Warren Petersen voted against the censure.

The reprimand follows her recent inflammatory comments on social media, as well as a speech to a white supremacist group late last month. But it was a last-ditch effort by Rogers to avoid censure through political threats to fellow Republicans that rankled her own caucus and that solidified the vote among her own caucus.

Rogers lashed out from the Senate floor, calling the action an attack on free speech.

Rogers also accused Senate GOP leadership of "colluding with Democrats" against her. But Senate President Karen Fann (R-Prescott) said that's not the case, nor was the Senate interfering with anyone's First Amendment rights.

"But what we do not condone is members threatening each other to ruin each other, to incite violence, to call us communists," she said.

Fann’s remarks referred to Rogers’ tweet, hours before the censure vote: "Today is the day where we find out if the communists in the GOP throw the sweet grandma under the bus for being white."

A day earlier, Rogers offended many senators with a threat: "I will personally destroy the career of any Republican who partakes in the gaslighting of me simply because of the color of my skin or opinion about a war I don't want to send our kids to die in.”

Rogers tried other tactics to convince colleagues to vote against the move. For example, tweeted at Sen. Paul Boyer (R-Glendale) pointing out that she supported his measure to greatly expand eligibility for vouchers of state funds for parents to use at private, parochial and homeschooling. Boyer was not impressed.

"So, I should stay silent on your unhinged speeches and tweets, Wendy Rogers, because you once voted for one of my bills?" he responded. "No thanks."

“Let's not pretend that this isn't the first, second, third, or even fourth time we've seen this sort of racist, bigoted, and anti-Semitic talk from the senator,” Rios said. “This is not an aberration in behavior. It is the default.”

Rogers' behavior is not that of a “sweet grandmother,” Rios added. "It's someone who has gleefully called white nationalists 'patriots,' called for hanging political enemies, called (Ukranian President Volodymyr) Zelenskyy a globalist puppet for Soros and the Clintons."

During a Feb. 25 speech to the America First Political Action Conference, a group of white nationalists, Rogers said "we need to build more gallows."

"If we try some of these high-level criminals, convict them and use a newly built set of gallows, it'll make an example of these traitors who have betrayed our country," she said. She also praised Nick Fuentes who at the conference sought applause from the crowd for Russia's invasion of Ukraine.

Rogers has also made her feelings clear in recent tweets about the war on Ukraine, billionaire investor George Soros and Zelenskyy. Both Zelenskyy and Soros are Jewish.

Rogers posted a markup of the censure that used stronger language to describe her “outrageous and patently absurd comments” on the Russian invasion of Ukraine and inciting “general racial and religious discrimination.” But the text was stricken in favor of language that focused on her threats of “political destruction” of her enemies.

The censure by the Senate stands in sharp contrast to remarks of Ducey himself.

He was asked just last week, after many of the senator's comments had been widely circulated, whether he regretted having his political action committee put $500,000 into the 2020 election to help Rogers.

Ducey said his concerns are different.

"What I need as a governor are governing majorities," he responded, noting that Rogers provides the crucial 16th Republican vote in the 30-member chamber.

"So that's what I've wanted to do, is move my agenda forward," the governor said. "I'm proud of what we've been able to accomplish and (Rogers) is still better than her (Democratic) opponent Felicia French."

In a statement, Ducey said that “anti-Semitic and hateful language have no place in Arizona.” The governor added that he believes “any statement supporting Russia’s actions in Ukraine is not only ill-advised, but wrong and dangerous.”

Ducey did not say whether he still thinks Rogers is a better option in the Senate than a Democrat.

There is no record of the Senate censuring a member for at least four decades, an action that takes only a simple majority vote.

Senators did vote to expel Sen. Carolyn Walker (D-Phoenix) in 1991.

Walker was one of 11 lawmakers caught up in what was dubbed "AzScam," taking money from someone posing as a lobbyist to get them to vote to legalize casino gaming in Arizona. All the others resigned; it took a two-thirds vote to oust Walker.