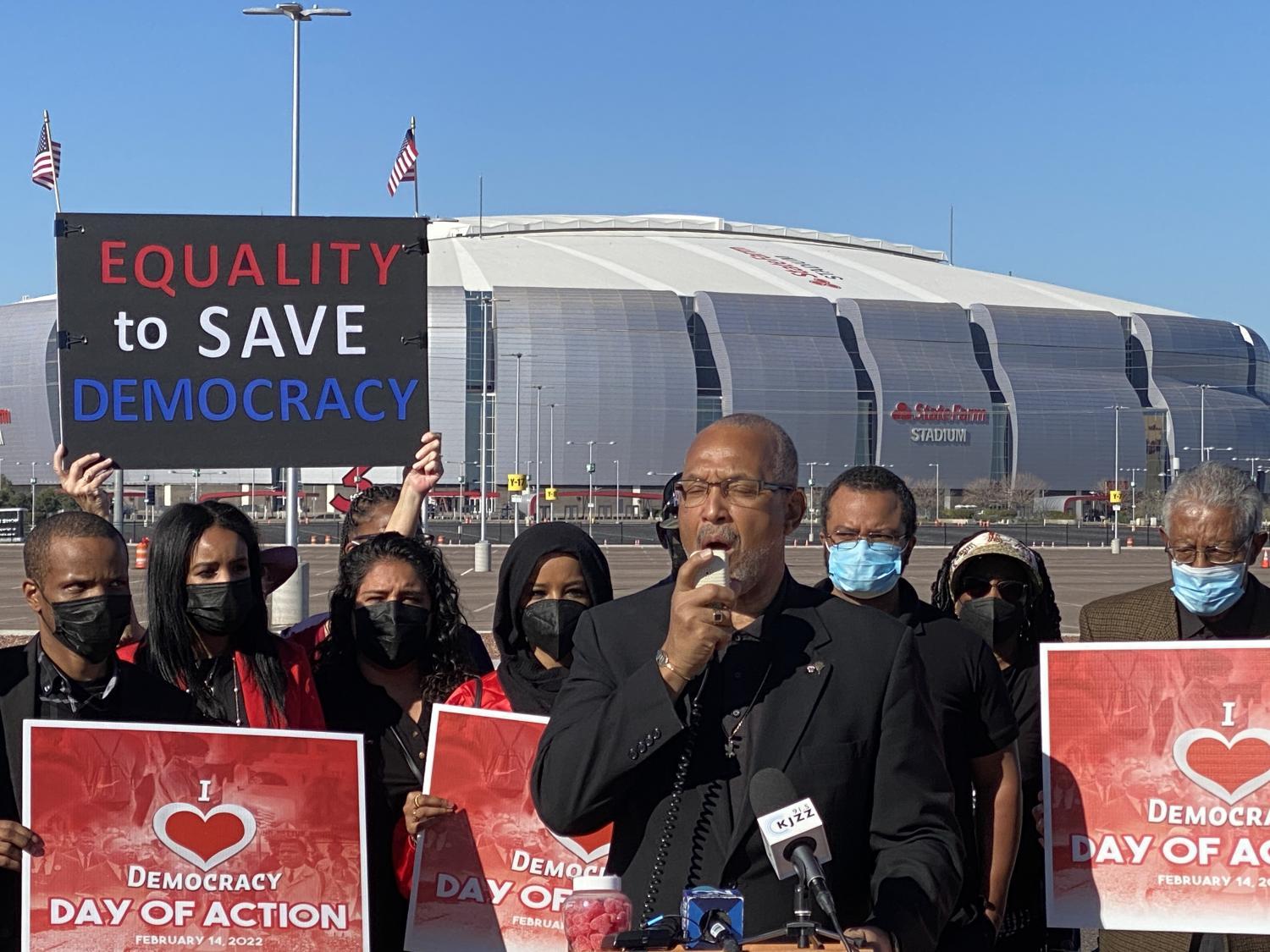 Ben Giles/KJZZ
Pastor Warren Stewart, the chair of the African American Christian Clergy, on Feb. 14, 2022, urges the NFL to move Super Bowl LVII out of Arizona in protest of new state voting laws passed since the 2020 election.

The Super Bowl is coming to Arizona in 2023, but some faith leaders are asking the NFL to send a message to state legislators passing new voting restrictions by moving the big game elsewhere.

Faith for Black Lives, the Arizona Faith Network, and other faith-based advocacy groups gathered in a park across the street from State Farm Stadium in Glendale on Monday mormning — the host of Super Bowl LVII — and urged the league to amplify the voices of voters they say are struggling to be heard amid a wave of new voting policies, some proposed and others already signed into law.

“I'm angry. And I don't know about you, but I'm going to use my anger and point it at the NFL and say, listen, you need to be angry with us. We want justice,” said Pastor Aubrey Barnwell of First New Life Church.

The clergy’s ask of the NFL is not unprecedented.

→ Phil Boas: Calls to move 2023 Super Bowl out of AZ could have opposite political impact

Arizona lost the 1993 Super Bowl after the state’s voters rejected two ballot measures in 1990, either of which would have made Martin Luther King Jr. Day a paid state holiday.

Faith leaders acknowledged the financial impact losing the Super Bowl again would have on Arizona’s economy. In 2015, the last time Arizona hosted the Super Bowl, the game generated $719.4 million in revenue, according to estimates by Arizona State University.

The clergy cited laws passed by Republican lawmakers and signed by Gov. Doug Ducey in 2021, such as a bill that could remove tens of thousands of voters from the state’s early ballot mailing list, and dozens more bills introduced so far in 2022 as evidence of a concerted effort to disenfranchise minority voters.

Donna Williams, the president of the Phoenix chapter of the National Coalition of 100 Black Women, noted the restrictive voting policies followed a 2020 election with historic voter turnout that’s been marred by false accusation of fraud.

“You can't fix something that isn't broken. The effort to introduce legislation to reform our elections is a ruse,” Williams said. “Stop being sore losers. Just because you don't like the outcome of an election doesn't give you the right to change the rules so that people do not have the right to vote.”