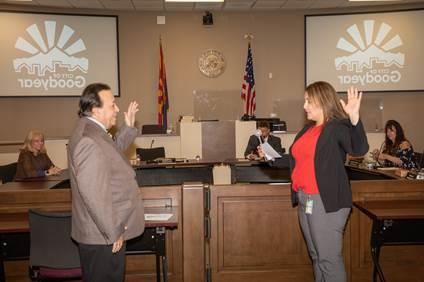 City of Goodyear
In a unanimous vote on Dec. 17, 2021, the Goodyear City Council appointed Joe Pizzillo to serve as Goodyear’s mayor.

Joe Pizzillo, a longtime Goodyear City Council member, was selected at a special meeting Friday to be the new mayor of Goodyear.

He replaces Georgia Lord, who died Sunday at the age of 83.

Pizzillo has been a Goodyear City Council member since 2009, and was the city’s acting mayor from November 2010 to March 2011.

Pizzillo will hold the position until next December. He was collecting signatures to run for mayor in the next election, as Lord was serving in her final term.

“Everything that’s done in this city is done by a team of us in the council. No one person gets anything done. So whether it’s your idea or not, it takes all of us, and we’re doing, in my view, a great job of moving this city forward,” Pizzillo said at Friday’s meeting.

Vice Mayor Brannon Hampton was acting mayor for the brief period between Sunday and Friday.

The Goodyear City Council will resume work in January.