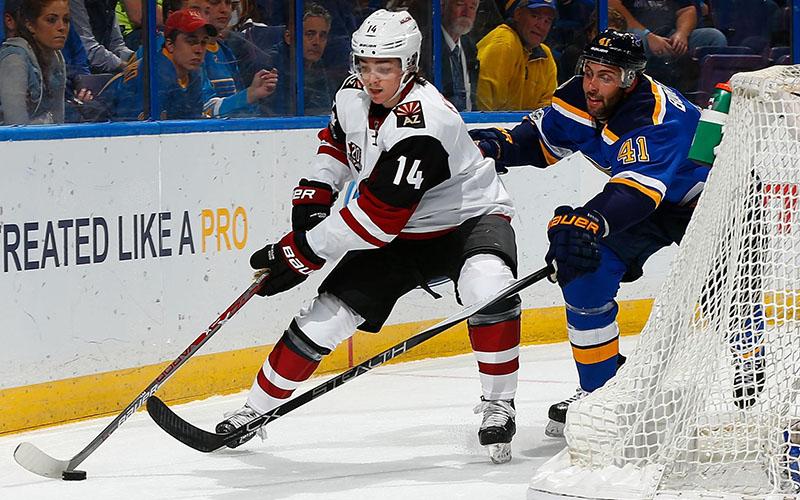 Arizona Coyotes via Cronkite News
Forward Clayton Keller is a big part of the Coyotes’ vision.

The Arizona Coyotes nearly ended up looking for a new home sooner than expected.

The city of Glendale informed the team that it intended to lock the Coyotes out of Gila River Arena by Dec. 20 if all outstanding debts to the city and the management company for the arena were not paid.

Glendale city manager Kevin Phelps sent a letter to the Coyotes on Wednesday informing the Coyotes they owe $1.3 million, including $250,000 to the city. The contents of the letter were first reported by The Athletic.

“We have already launched an investigation to determine how this could have happened and the initial indications are that it appears to be the result of an unfortunate human error,” the Coyotes said in a statement Wednesday night.

“Regardless, we deeply regret the inconvenience this has caused. We will make sure by tomorrow morning, the Arizona Coyotes are current on all of our bills and owe no state or local taxes whatsoever. And we will take immediate steps to ensure nothing like this can ever possibly happen again.”

Phelps informed the Coyotes that the Arizona Department of Revenue has filed a Notice of Tax Lien for unpaid state and city taxes owned by IceArizona, the Coyotes' ownership company. Phelps also said in his letter that he had instructed ASM Global, which manages Gila River Arena, to not allow the Coyotes in the arena if the bills were not paid by 5 p.m. on Dec. 20.

On Thursday morning, the team said it had paid all outstanding bills and tax liabilities.

The Coyotes have been leasing Gila River Arena on an annual basis since the Glendale City Council voted to opt out of a multimillion-dollar long-term deal in 2016. The city announced in August that it will not renew its agreement with the franchise beyond the 2021-22 season.

The team has submitted a bid for a tract of land in Tempe in what could be its first step in landing a permanent home.

Craig Morgan covers the Coyotes for PHNX Sports. He joined The Show to break down the situation.

Per Coyotes, all payments have been made. The Coyotes are current on all bills and tax liabilities.

The state Revenue Department and the venue-management company Glendale hires to run the arena did not confirm having received payment from the Coyotes.

Notice of the Arizona tax lien showed the National Hockey League franchise had unpaid monthly balances going back to June of 2020.

“Since the new ownership has been here, it has been a continual struggle to get payments paid in a timely manner,” Phelps told KJZZ.

Phelps said expectations for the club are the same as for thousands of other local businesses: pay taxes on time.

“We’re not setting a different standard for the Coyotes than what we expect from everyone of our businesses here in Glendale,” he said.

Forbes magazine reported on Wednesday that the Coyotes, worth around $400 million, are the least valuable franchise in the NHL.

The team so far this season owns the league’s worst record.