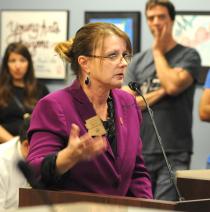 A Republican state senator wants to make sure Arizona pharmacists don’t get between COVID-19 patients and ivermectin, an anti-parasitic drug the U.S. Food and Drug Administration warns can be “highly dangerous” and has not been approved for treating the virus.

Sen. Kelly Townsend of Mesa said she’s heard stories of pharmacists refusing to fill prescriptions for ivermectin, which has been in high demand, particularly among anti-vaccine activists, as a COVID-10 treatment despite warnings from top health officials.

“It’s pharmacies themselves making the decision apart from the doctor and the patient to not fill a prescription, and during a health crisis like we’re in right now, that’s inappropriate,” Townsend said.

The FDA has approved the drug to treat some parasitic worms in humans, as well as topical treatments for head lice and some skin conditions. It’s also commonly used to treat or prevent parasites in animals, leading some to seek out feed stores for horse de-wormer.

Townsend said doctors should be free to prescribe ivermectin for an unapproved use, or “off-label” treatment.

She compared ivermectin to misoprostol, one of two drugs widely known as the “abortion pill.” In tandem with mifepristone, misoprostol can be used to end a pregnancy or help expel a miscarriage. On its own, misoprostol can help induce labor.

In 2016, the FDA updated the label for mifepristone to reflect the common use of the drug, but inducing labor remains an off-label use of misoprostol.

Townsend said she’s received assurances from the Arizona State Board of Pharmacy that “they were not going to be getting in between doctors and their patients.” Her bill would put that practice in law, at least during public health emergencies, by specifying that a pharmacy “may not refuse” to fill a prescription for the off-label use of a “potentially life saving” drug.

Rules adopted by the Arizona Board of Pharmacy allow pharmacists to exercise "professional judgment" to determine whether or not to fill a prescription. There is also an exception for “sincerely held religious beliefs” that allows pharmacists to refuse to fulfill prescriptions for abortion medications.

EDITOR'S NOTE: The story has been updated to clarify rules adopted by the Arizona Board of Pharmacy allowing pharmacists to exercise "professional judgement."