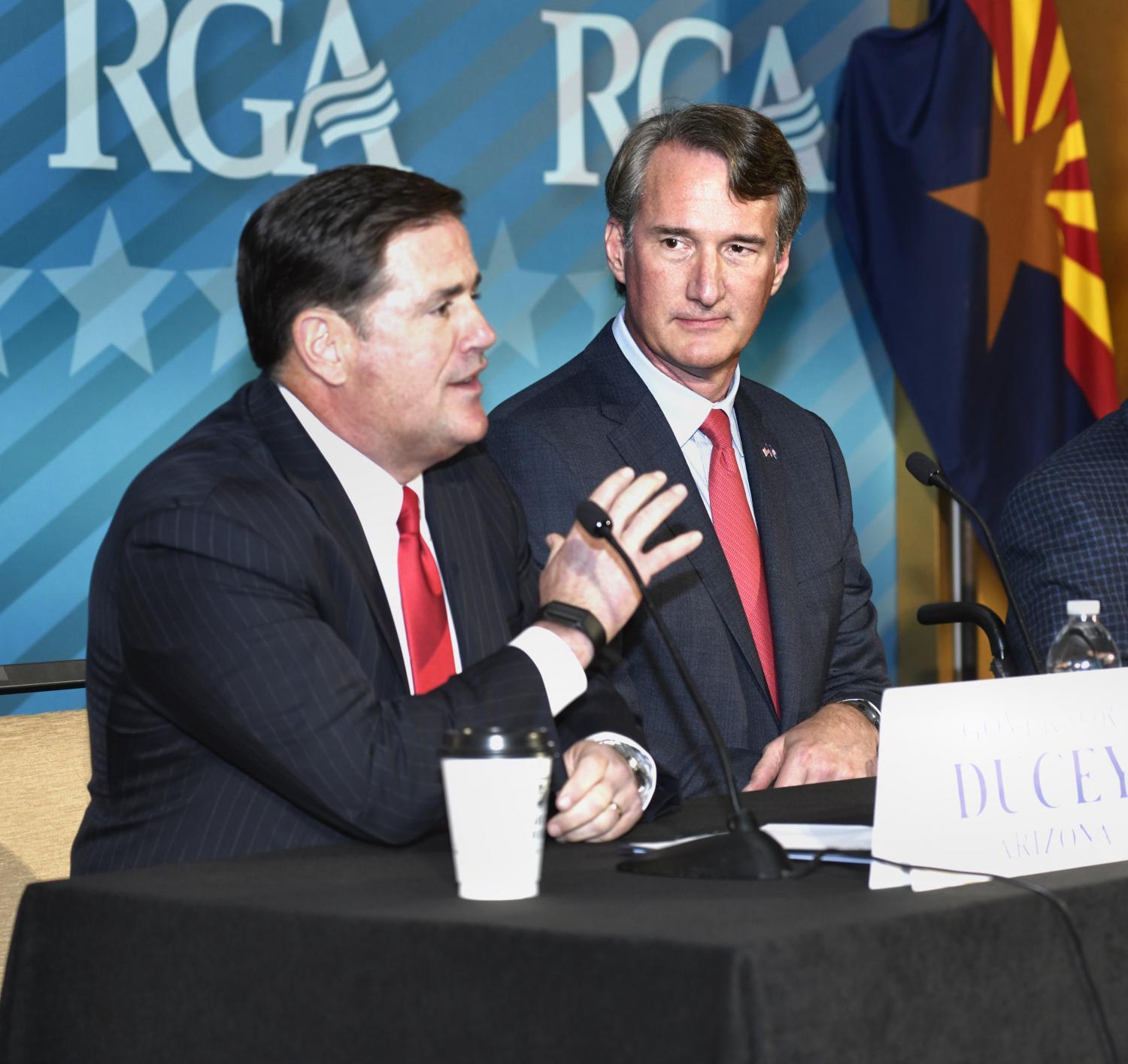 Howard Fischer/Capitol Media Services
Gov. Doug Ducey answers questions from reporters on Nov. 17, 2021, about Republican prospects in 2022 on the heels of the victory this month of Glenn Youngkin, next to him, in Virginia.

Gov. Doug Ducey said the just-completed Virginia election provides a road map for Republican gubernatorial candidates in Arizona and elsewhere who hope to get elected next year.

Ducey told Capitol Media Services Wednesday that Glenn Youngkin managed to become the first Republican to win a governor's race in Virginia in more than a decade by staying out of federal issues.

"He was focused on what is specific to what a governor could take action on,'' such as education and mask rules, Ducey said.

What Youngkin also did, however, is keep Donald Trump at arm's length.

Several of the GOP contenders in Arizona's 2022 governor's race have plotted a different political path, seeking to portray themselves as ideological allies with the often divisive, yet still popular in some circles, former president.

Leading that effort is former TV host Kari Lake, who courted and got Trump's endorsement and also had a fundraiser with him at his Florida resort.

But Ducey — who can't run for reelection due to term limits — was quick to say he's not telling any of the Republican gubernatorial wanna-bes that they should stay away from Trump, or have Trump stay away, if they hope to win the general election next year.

Still, Ducey suggested that the Virginia race has a lesson for those with gubernatorial ambitions.

"What I heard Glenn Youngkin say was that he was going to run a Virginia race,'' he said.

That wasn't the case with the campaign run by the Democratic contender, Terry McAuliffe, Ducey added: "He was running a national campaign for governor."

Of McAuliffe, Ducey said: "He had President Biden in, Vice President Harris in, he had former President Obama in. The only person I don't think he had in was Hillary Clinton."

It's not just about support of national leaders, Ducey said. It's about the focus of the campaign.

In Arizona, candidates should tailor their campaigns to issues specific to this state, where they "create their own brand and stay out of national politics, the national jet stream of issues," he said.

One issue that Ducey believes is a sure-fire winner is education. He suggested a way to appeal to Arizona voters: go after teachers' unions.

"I think the pandemic exposed much of what is happening in pockets of education,'' he said, referring to schools being closed down at least partly due to demands by teachers.

"Parents got a real taste that the union is not on the parents' side,'' Ducey "And as much as we love to support our teachers, the union, the government union, is not focused on our kids.''

Ducey said another good issue for GOP candidates is school choice and the option for parents to choose something other than traditional schools.

"There's an opportunity for it to be expanded,'' he said. "Parental choice makes a parent a customer who has some power in the relationship. And those options of school choice, of charter schools, of Catholic schools, Christian schools, private schools, Hebrew schools, ought to be available to all of our kids."

Ducey has one other piece of advice for gubernatorial hopefuls, also based on how Youngkin ran his campaign.

"He was very positive, optimistic, aspirational, very much a happy warrior," he said. "I think people want to see that in politics. People have missed that in recent races."

The Republican Governors Association meets this week in Phoenix. Ducey, who is chairman of the group, is basking in the wake of Youngkin's victory.

"There's a celebratory theme to this because we want and won Virginia, a state that is considered deep blue that had not been won by a Republican since 2010," he said.

The victory was sweetened, Ducey said, by Republicans also winning races for lieutenant governor and attorney general, and taking control of the state House.

"So that gives a lot of hope and optimism to the future," Ducey said. "What we saw is Republicans have a lot of energy, Democrats are dispirited and independents have collapsed on Joe Biden."