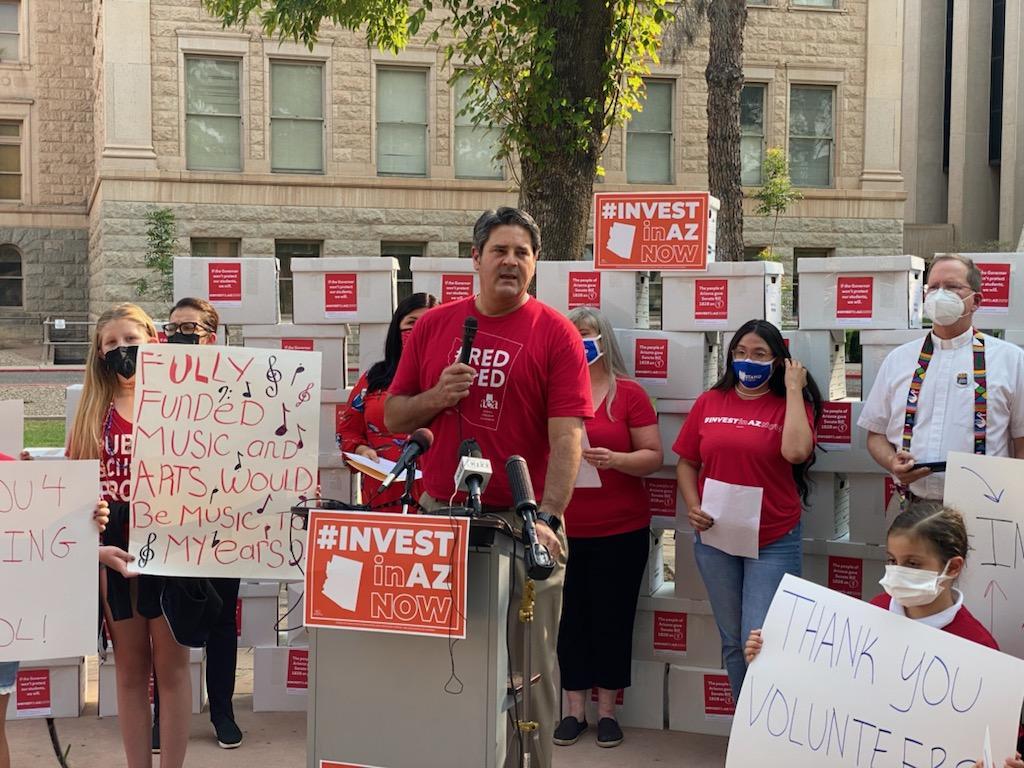 Ben Giles/KJZZ
Joe Thomas, president of the Arizona teachers union, speaks at the Capitol on Sept. 28, 2021.

It looks like Arizona voters are going to get the last word on a massive tax cut approved by Republican lawmakers and signed by Gov. Doug Ducey.

But a separate effort to override a series of GOP-backed changes in voting law fell short.

Public school advocates and their allies turned in petitions with an estimated 215,787 signatures to force a public vote on the GOP plan to scrap the state's progressive income tax structure in favor of a flat tax. That plan reserved the biggest benefits to individuals with a taxable income of more than $159,000 a year.

“Coalition members behind me have worked diligently, again, over the last 90 days to do what our constitution allows us to do, and that is to refer bad policy to the voters so that they can reject it,” said Joe Thomas, president of the Arizona teachers union that contributed to the Invest in Arizona campaign.

Stand for Children Arizona, a nonprofit education advocacy organization, also worked to collect signatures to refer the flat tax to the ballot.

The Show spoke with its executive director, Rebecca Gau, to learn the reasoning behind their efforts.

Secretary of State Katie Hobbs now has to send a random sample of the signatures to the recorders in each of the counties from which they came. That sampling will determine if the final tally is at least the 118,823 signatures necessary to refer the tax cut to the ballot in 2022.

Business interests who trumpeted the change in tax law may also file suit to block it.

But if the petition drive is upheld, it immediately suspends the tax cut until it can go to voters who will decide whether to ratify what lawmakers enacted or reject it.

Beth Lewis, a parent, teacher and leader of Save Our Schools Arizona, promised a robust campaign to convince voters to reject tax cuts she said would erode at the state's ability to better fund public schools.

"I think an issue like this, whether we want to fund our schools or not, is great to have on the ballot," Lewis said. "It really forces forces people, elected officials who are running for office, to take a side and to express. ... Do you want to fund public education or not?" 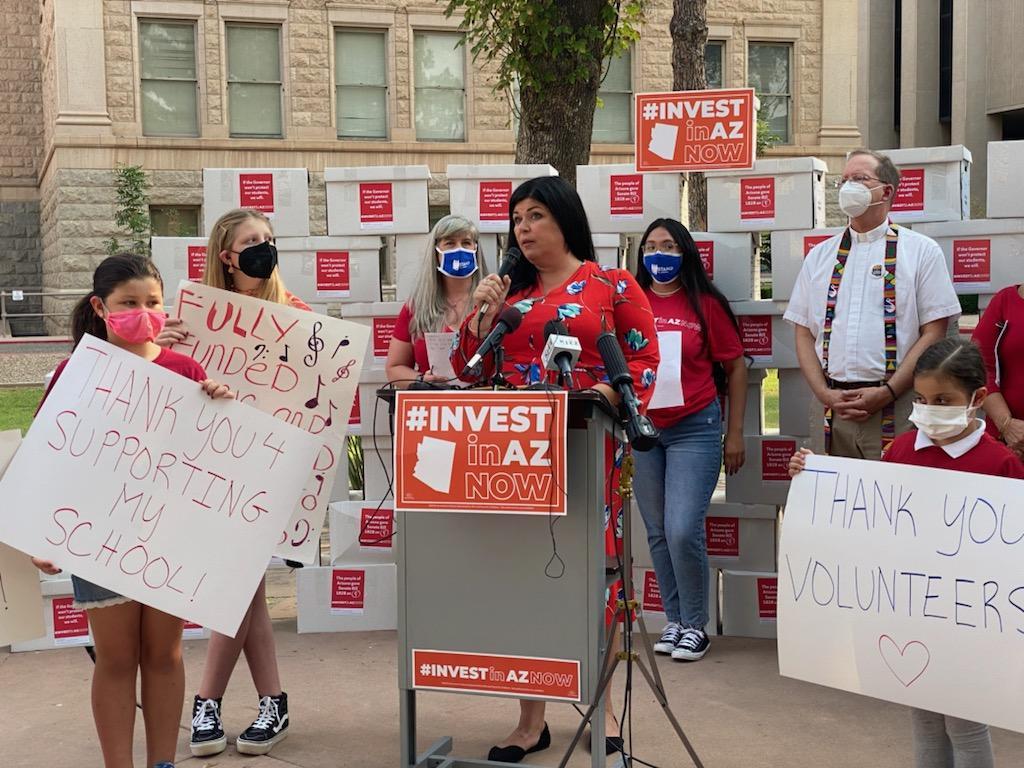 Ben Giles/KJZZ
Beth Lewis, leader of Save Our Schools Arizona, promised a robust campaign to convince voters to reject tax cuts she said would erode at the state's ability to better fund public schools.

Petitions were also gathered to overturn a special tax category for small business owners — a change in tax law that attempted to exempt small businesses from a voter-approved 3.5% surcharge on individual incomes or more than $250,000 and $500,000 for couples.

Far fewer signatures, 123,531, were gathered for that effort. A third petition drive seeking to cap what the wealthy pay in that surcharge fell short.

However, a ruling earlier this year by the Arizona Supreme Court may prevent the surcharge from ever being assessed.

Petitioners had until 5 p.m. Tuesday to gather the necessary signatures. Eric Kramer, chairman of Arizona Deserves Better, confirmed that volunteers did not get the signatures needed for three petitions to block enactment of various election laws, which would:

However, those last two laws were voided by a Maricopa County Superior Court judge on Monday, a ruling that determined the election laws and other policies were illegally tucked into the state budget.