City of Phoenix
The St. James Hotel was constructed in 1929 in downtown Phoenix.

A parking lot will replace a 92-year-old hotel that was recently demolished in downtown Phoenix. The owners of the site also own the NBA’s Phoenix Suns and WNBA’s Phoenix Mercury.

The former site of the St. James Hotel is just a three-minute walk to the Footprint Center where the Suns and Mercury play. But it was the city, not the team, that pushed for demolition to allow light rail crews to safely dig below the building.

Councilwoman Yassamin Ansari, who represents the area, told KJZZ she asked about alternatives, “Is there any way to keep this building up or move the building or anything like that while doing whatever we need to do for light rail and the answer, unfortunately, according to the engineers, was no.”

She said the St. James Hotel, constructed in 1929, was labeled structurally unsound and Suns Legacy Properties will use the parcel at 17 E. Madison for parking.

“Those, you know, who are part of the historic preservation community still valued it as a part of our history and a part of our culture and while we continue to grow so rapidly we still should try to maintain that history or tell the story,” Ansari said. 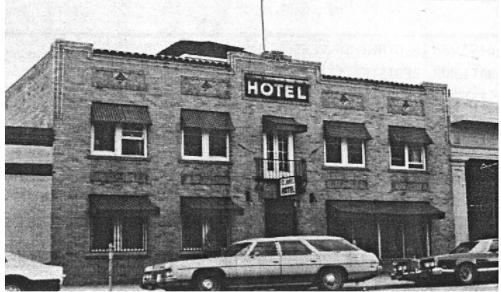 City of Phoenix
Photograph of the St. James Hotel from the 1984 historic property inventory form.

During meetings with city staff, community members and Suns representatives, she said the Suns made it clear they were in no rush to build a parking lot. In 2012, the Suns owners pledged not to completely tear down the St. James Hotel following public backlash after demolishing the Madison Hotel, built in 1909, to make room for parking.

“It was the intention 10 or 12 years ago to preserve this hotel — at least maintain the façade of it — and I think as folks prioritize historic preservation, it would be important to track these efforts more closely, “ Ansari said. “So I think our office will definitely be doing that, or making an effort do so, I hope that the historic preservation community will do that as well so that we can get ahead of these things before the become kind of urgent, you know, we need to do this now or we won’t meet certain deadlines.”

The city plans to build an interpretive sign using salvaged materials to highlight the hotel’s significance to Phoenix’s working class in the 20th century. The Suns will contribute $20,000 and Phoenix will add up to $30,000 for the project. The Suns also agreed to let food trucks and farmer’s markets use the lot when it’s not needed for parking.