News that Devin Booker will miss the start of Phoenix Suns training camp because of a positive COVID-19 test, coupled with high-profile league players questioning the vaccine, suggest the NBA is still struggling to navigate a pandemic environment.

That was clear Monday at Suns Media Day, which is usually a morning of excitement and optimism, especially for a team hoping to return to the NBA Finals. 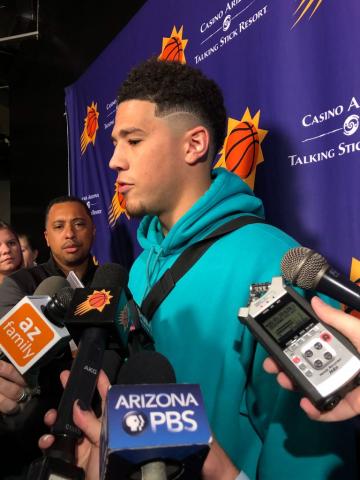 As player after player took the stage, Arizona Republic reporter Duane Rankin asked, “Have you been fully vaccinated?”

“Yeah, I am,” Frank Kaminsky said.

For some, the question was not quite so welcome.

Crowder was smiling, but his tone suggested something different.

Chris Paul had a similar reaction.

“I’m here!” Paul repeated, chuckling. “Yeah, I mean, you can’t be here (if you’re not vaccinated). You know the rules.”

One player who wasn’t there was Booker, who said on his Twitch stream earlier Monday that he had tested positive for COVID-19. He added he didn’t not want to specify if he had been vaccinated.

The NBA is not enforcing a vaccine mandate for its players, but unvaccinated players will face strict safety protocols. Additionally, missing games in cities or states with vaccine mandates at indoor arenas is a possibility. Shams Charania of The Athletic reported that 90% of NBA players have been vaccinated and the number is rising as the arrival of training camp has pushed some players to get the shot.

“I definitely had to change my mind about it,” said Elfrid Payton, who received his second shot on Sunday. “It was not something that I wanted to do.”

Meanwhile, the 10% around the NBA are making headlines. The Orlando Magic’s Jonathan Isaac spoke recently with Matt Sullivan of Rolling Stone on how he and other unvaccinated players feel harassed and ostracized. Additionally, he critiqued the safety protocols and what unvaccinated players must do to abide by it.

“You can play on the same court. We can touch the same ball. We can bump chests. We can do all those things on the court. And then when it comes to being on the bus, we have to be in different parts of the bus? To me, it doesn’t seem logically consistent.”

In other situations, the laws of the state and the regulations of indoor arenas may also inspire players to get fully vaccinated. Andrew Wiggins of the Golden State Warriors currently falls under this bracket, as San Francisco requires proof of vaccination for large indoor events.

Meanwhile, Kyrie Irving of the Brooklyn Nets was forced to attend the Nets’ Media Day on Monday over Zoom, as New York City requires New York-resident athletes who play or practice indoors to show proof of at least one vaccine shot.

These players could miss parts, if not all, of training camp, as well as actual games during the season if their vaccine status remains unchanged.