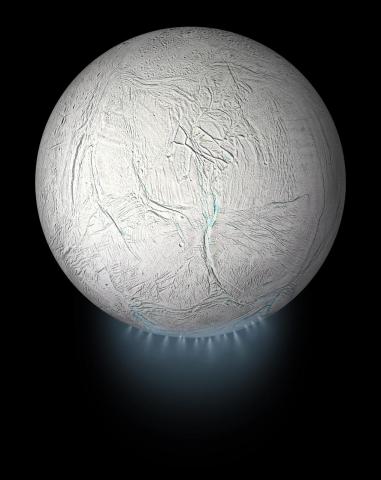 NASA/JPL-Caltech
An artist's rendering of the water plumes at Enceladus' South Pole.

Since the Voyager missions of the early 1980s, scientists have been interested in one of Saturn’s moons.

Enceladus is a very bright object; that reflectiveness is due to ice. It also features plumes of water erupting from its South Pole like geysers.

Years after Voyager, the Cassini probe did a fly-by through these plumes and took samples of what was in them. Some of what researchers found in those samples was surprising.

Among the biggest surprises: the amount of methane.

To learn about the significance of this finding, The Show spoke with Régis Ferrière, an associate professor in the University of Arizona’s Department of Ecology and Evolutionary Biology; he’s also director of an international research lab.