Arizona Republican Lawmakers Packed The Budget With Policies And Regulations. Was That Unconstitutional?

In late June, Arizona lawmakers had until the end of the month to meet a deadline to adopt a new state budget. Republicans traditionally pass spending plans on party lines, rather than negotiate a bipartisan agreement with Democrats.

On June 28, with less than 72 hours to spare, Rep. Joseph Chaplik told conservative radio host Garret Lewis he’d refuse to vote for a budget if it didn’t include a ban on mask mandates in K-12 public schools.

It’s called horse trading — Chaplik was leveraging his vote on the budget for something in return.

That’s where attorney Roopali Desai said Republicans like Chaplik got it wrong. On Aug. 12, she filed a lawsuit on behalf of Arizona’s teachers union, school business officials, civic groups and others arguing that a handful of other policies that were passed as part of the budget are unconstitutional.

That includes rules for conducting elections, regulations for what teachers can and can’t talk about in their classrooms, and the ban on local school leaders requiring students and staff to wear masks.

What they all have in common, Desai says, is they have nothing in common with the budget.

“There's not any budget provision relating to a prohibition on COVID-19 mitigation policies (like mask requirements),” she said. “It's simply a substantive policy that was put in here because, and as we cited in the complaint, certain legislators insisted that it be in there if somebody wanted them to vote on a budget.”

The city of Phoenix filed a separate lawsuit making the same argument earlier this week. City attorneys say a policy designed to neuter civilian oversight of the Phoenix Police Department is unconstitutional because it shouldn’t have been included in the budget.

It’s not the substance of the laws that are at issue. It’s the way Republicans approved them.

When legislators negotiate a budget, there’s typically a dozen or so bills that detail the spending plan. One is known as the “feed bill” — it’s a list of all the appropriations of state revenues. Then there are budget reconciliation bills, BRBs for short. Divided into subjects like public safety and infrastructure, these bills act like an instruction manual for the feed bill. They provide details for state agencies and local governments on how to spend money in the budget.

It’s like connecting the dots between a provision in the manual and an appropriation,” Desai said.

“You should be able to, if done correctly, line up the provision in the appropriations bill that then requires or results in a provision being put into a BRB,” she said.

When there’s nothing connecting a policy in a BRB to the state’s budget, that’s a violation of the Arizona Constitution, Desai said — there’s a rule that a bill can only tackle one thing, or one single subject, at a time.

When it comes to the budget, Desai says the subject is how to spend taxpayer dollars. 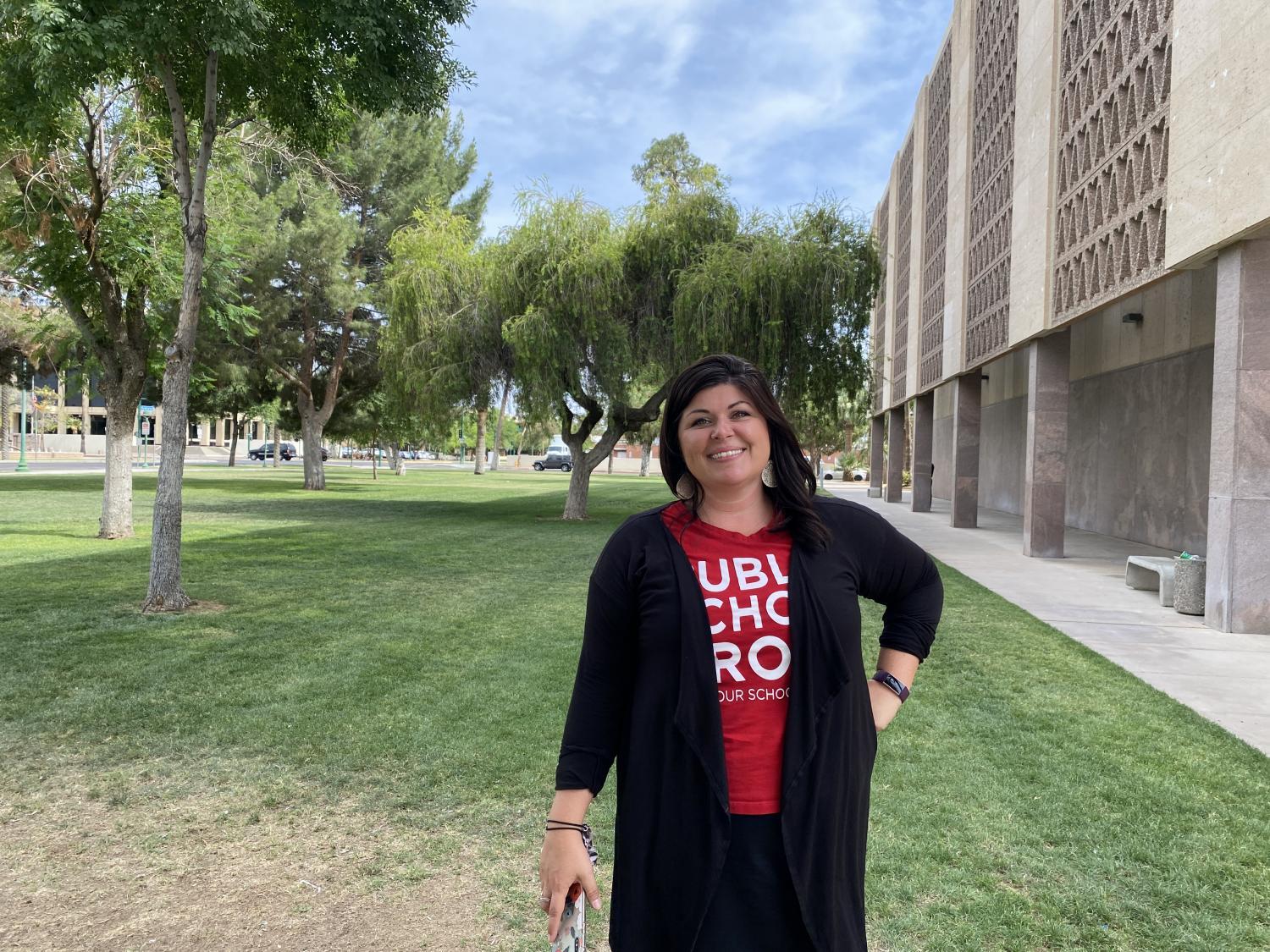 Rocio Hernandez/KJZZ
Beth Lewis, executive director of Save Our Schools Arizona, says she and other education advocates are prepared to launch a referendum against the proposed flat tax plan if it gets to that.

Beth Lewis is a mother, teacher and executive director of Save Our Schools Arizona, a group of public school advocates who’ve been active at the Capitol since 2017.

Horse trading may be a part of the political game, but Lewis said Republicans took it too far with the budget.

“At the end of the day, these lawmakers and the special interests that are driving these, you know, sort of pet projects or pet positions, were forced in to get other people to vote on the budget,” she said. “And that's just not the way the legislative process should work.”

At a panel hosted by the Greater Phoenix Chamber of Commerce on Aug. 17, Senate President Karen Fann lamented how the budget process played out.

The Prescott Republican said her party’s dwindling numbers at the Capitol were to blame. Republicans, who’ve held legislative majorities in both chambers for nearly three decades, don’t give Democrats a seat at the table when it comes to the budget. And the Republican majority this year was so slim that to pass a budget on party lines, all 31 Republicans in the House and all 16 in the Senate had to vote for it.

“Everyone knew that they were either number 16, or number 31, which created a challenge in, we ended up having to put policy in the budget that not necessarily everybody was on board with. But to get that budget moving, that's what we had to do,” Fann said.

Lewis said lawmakers can do better.

“That's definitely politics,” Lewis said. “But with the single-subject rule with budget bills, we should really be talking about appropriations, and I think this is what the courts are going to decide, right? Is it unconstitutional to push in all of this other legislation when lawmakers are supposed to be talking about how to fund our state budget?

There are a number of laws at stake in the two complaints filed against Arizona. Those laws are scheduled to take effect on Sept. 29. On Thursday, Desai asked the court to block the state from enforcing laws she says shouldn’t have passed as part of the budget.

The courts could also send a message to Republicans that “politics” as usual, when it comes to budget negotiations, must change.

The budget, Desai said, should stick to the budget.

“This often happens — lawsuits are brought to put folks back on the right track. This is what our founding fathers required and sort of envisioned for the process, the legislative process. It's in our Constitution,” she said. “We've gone astray from that process, we need the courts to set those boundaries. And then hopefully, moving forward, if we're successful in this case, the legislature won't engage in these kinds of shenanigans.”