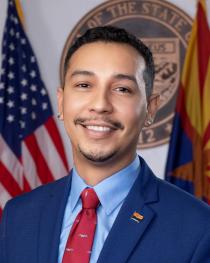 Less than a week after he was arrested and charged with sexual acts with minors, Tony Navarrete resigned from the Arizona Senate.

The Phoenix Democrat faced intense pressure to resign from Republicans and Democrats alike after details emerged from a police investigation of multiple allegations of sexual conduct from two victims. Senate President Karen Fann and Sen. Rebecca Rios, the top Republican and Democrat in the Senate, respectively, issued a joint statement on Monday calling for Navarrete to step down.

“The circumstances and serious nature of the felony charges faced by Senator Navarrete provide an untenable distraction from his role as an elected official,” the Senate leaders said.

Both confirmed that Navarrete resigned via a brief, one-sentence email on Tuesday afternoon.

“This was the right thing to do considering the serious allegations,” the two said in a statement Tuesday.

Navarrete was charged with seven felonies. If convicted of each offense, he’d serve a mandatory minimum sentence of 49 years in prison.

His resignation triggers a process to fill his now vacant seat in Legislative District 30. A citizen panel in the district will soon meet to nominate three candidates to replace him. Then the Maricopa County Board of Supervisors appoints a new senator from that slate of candidates.

Stepping down also avoids a messy ethics investigation of Navarrete and his alleged crimes. Sen. Kelly Townsend (R-Mesa) filed a complaint with the Senate Ethics Committee on Monday afternoon, demanding a review of whether similar accusations have been made against Navarrete, perhaps among colleagues and staff at the Arizona Capitol.

Sen. Sine Kerr, the Republican chair of the ethics committee, said Monday she planned to recommend the committee investigate Navarrete, but also echoed calls for his resignation. Now that Navarrete is no longer in office, the planned investigation is moot, Kerr said — the committee only has jurisdiction over sitting senators.