Months of border crossing restrictions have been a boon to some, bust for others 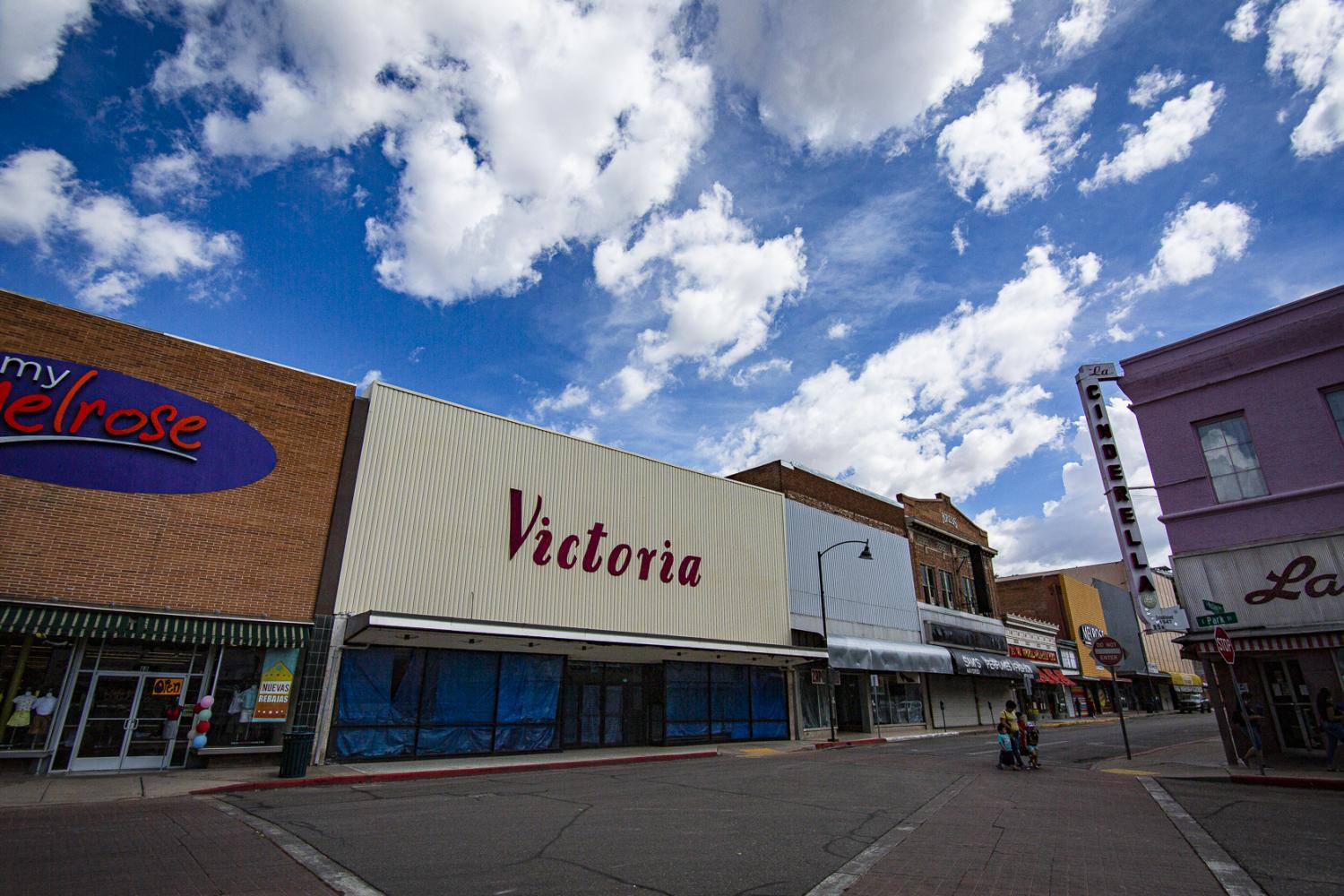 Murphy Woodhouse/KJZZ
Morley Avenue, the historic heart of Nogales, Arizona's downtown, was all but dead on a recent weekday afternoon.

On Monday afternoon in downtown Nogales, Arizona, the buzzing of cicadas — a fabled prelude to impending rains — and the occasional passing car was about all that broke the silence.

“Right now we’re walking down Morley Avenue south towards the border,” said Evan Kory, whose family has been in the border retail business since the 1940s. “And Morley Avenue is Nogales Arizona's Main Street, which currently is pretty dead. There’s only a couple stores open out of dozens of storefronts. So it’s a pretty bleak scenario.”

Two of those still open are his family’s — La Cinderella and Kory’s Bridal. Shuttered roll-up doors and windows sporting liquidation or for lease signs line much of the rest of the avenue. 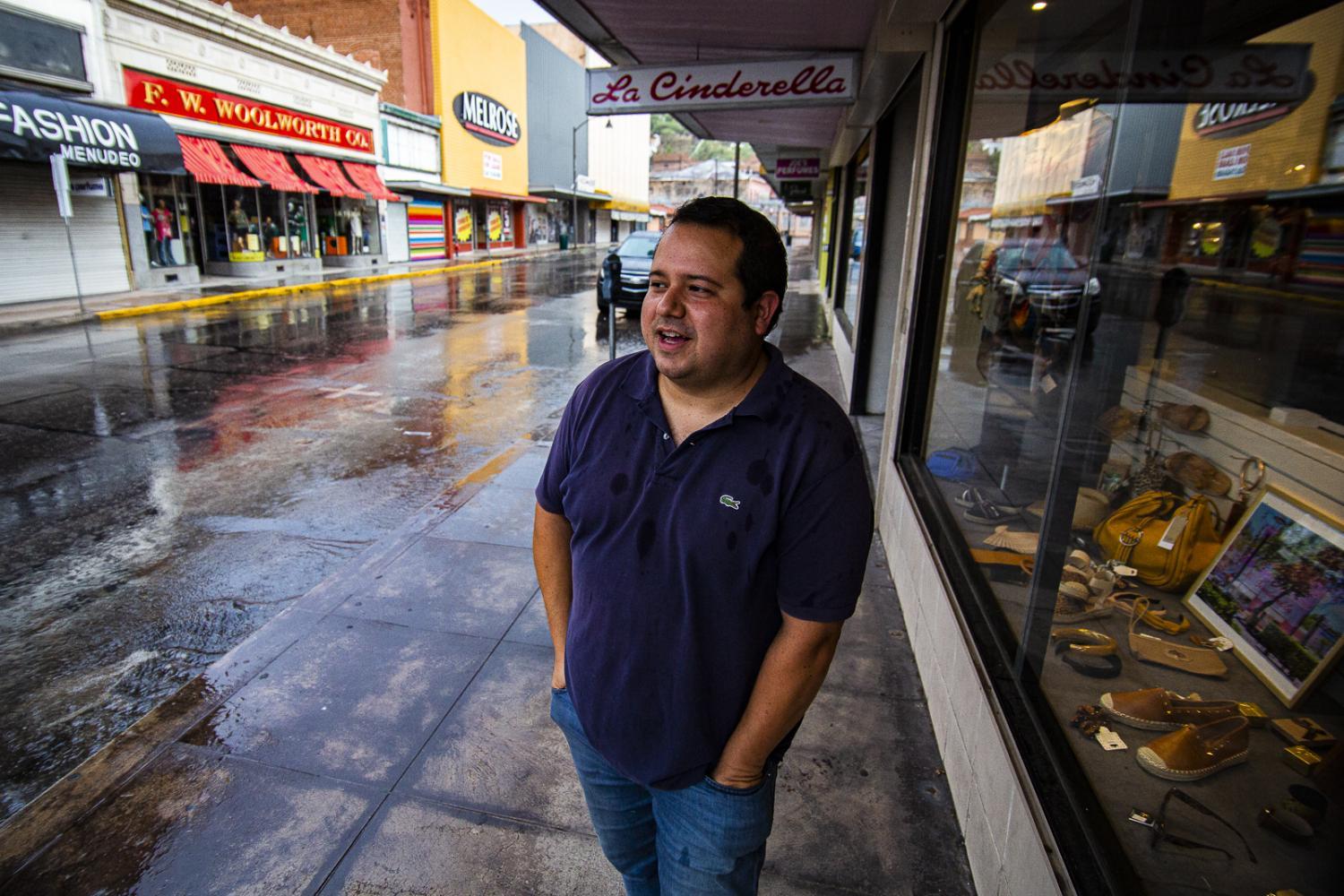 Murphy Woodhouse/KJZZ
Evan Kory's family owns two stores on Morley Avenue, where they've worked in border retail since the 1940s. He expects many of the shops on the street to never reopen, but hopes some seize the opportunity to take the avenue in a new direction.

Downtown Nogales’ troubles long predate the pandemic, but the ongoing northbound border crossing restrictions, recently extended for another month earlier this week, have shut out many of the Mexican shoppers it depends on for nearly a year and a half.

“This is a one-way street,” Kory said of the strip of Morley that runs in front of the bridal store, whose awning was providing shelter from the steady rain that had just started. “I can't tell you how many cars go in the other direction, the wrong direction. Because there's nothing to indicate which direction to go. That's like a daily occurrence, and I don't blame them because not only are there not people, there aren't cars.”

Bustling South Of The Border

Just south of the border earlier that same day, it was a very different scene. A steady stream of shoppers strolled the sidewalks, and into and out of the many stores along Avenida Obregon, which was thick with traffic.

Lifelong Nogales, Sonora, resident Veronica Valencia had just finished up shopping and was heading back to her car.

“If not daily, two or three times a week,” she said of her crossing habits before the restrictions went into effect on March 21, 2020, a date she recalled precisely. Apart from clothes and groceries, her husband’s machine shop depends on U.S.-side purchases.

“We felt frustrated because we were accustomed to crossing,” she said of the start of the restrictions. “But we’ve also accustomed ourselves to shopping and consuming here.” 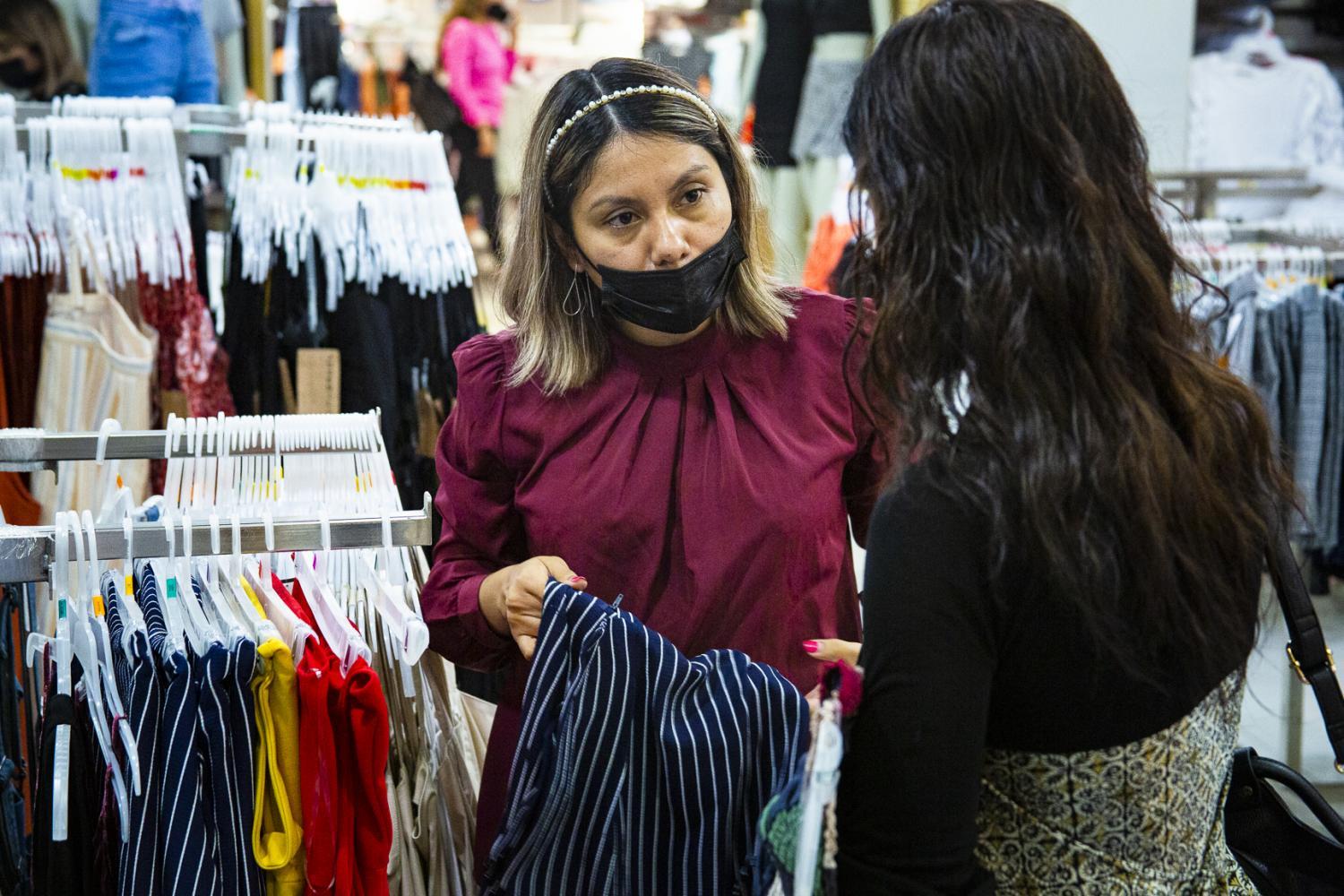 Murphy Woodhouse/KJZZ
Manager Rosario Gonzalez helps out a customer at the women's fashion store Vertiche in Nogales, Sonora. She says business has been up since the crossing restrictions went into place in March 2020.

Her husband also has items brought from Arizona by those who can still cross — for a fee. Others interviewed mentioned similar arrangements, either with people charging for the service or friends and family. That’s something Arizona officials and businesses say has helped temper a collapse in demand from Sonorans.

For some Sonoran border businesses, the restrictions have also represented an opportunity.

“We can really see that there has been an increase in sales,” she said of months of restrictions, something she thinks is good for the Sonoran economy.

And it’s also given them an opportunity to develop relationships with customers who previously shopped in Arizona. That’s why she’s not worried about business falling off once the restrictions ease.

“People in Nogales (Sonora) got to know what Vertiche is,” she said. 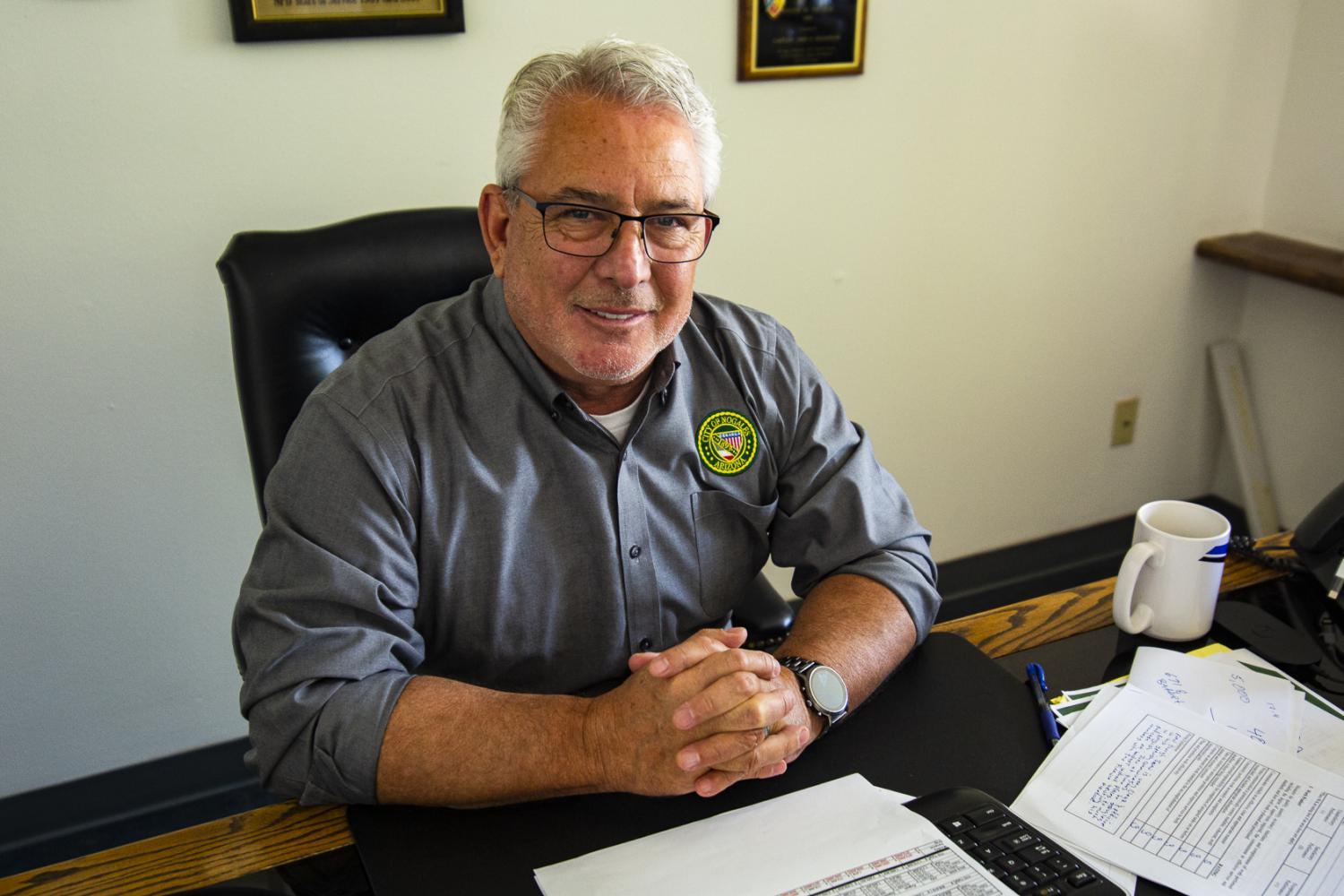 All of those purchases now being made in Mexico by Sonorans who previously did much of their shopping north of the border is exactly why local officials like Deputy Nogales, Arizona, City manager John Kissinger were so nervous when the restrictions were announced.

“We thought it could be very devastating,” he said. “The last study we had on this, and it's been dated, was that the majority of our sales tax collected — and we live and die off of sales tax at the city — was collected by our Mexican shoppers and our Mexican visitors.”

The city implemented spending freezes and other measures to weather the feared revenue collapse, according to Kissinger.

But that fiscal cliff never really came, and in fact sales taxes revenues show a modest positive trend over the course of the pandemic, according to state treasurer data analyzed by KJZZ. Several recent months were even up over the same month in 2019, before the pandemic upended the world.

Douglas and San Luis also seem to have avoided that fate. A May Border Report story noted tax revenue increases in a number of Texas border communities. 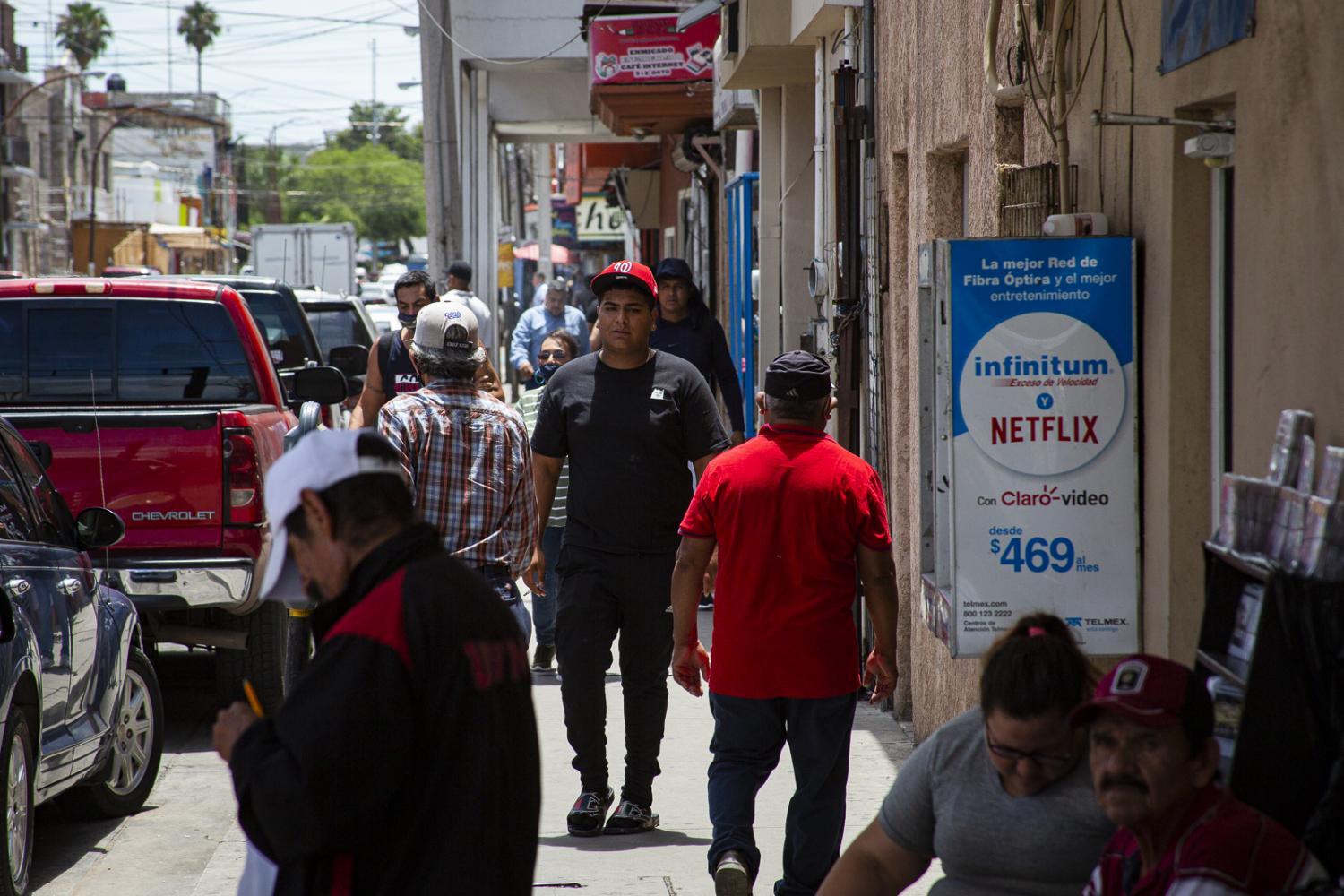 Murphy Woodhouse/KJZZ
The sidewalks were bustling late Monday morning in downtown Nogales, Sonora, a stark contrast to the quiet downtown north of the border.

“The whole COVID thing, and the restriction of cross-border travel did have, well we know it had to have had an effect on our shopping from Mexico,” Kissinger said. “But I think we picked up in other areas to offset that a little bit.”

Specifically, local residents have received multiple pandemic stimulus payments, on top of more generous benefits for those out of work. With that money, Kissinger said many people also did more shopping locally, and a 2019 Arizona law meant that their online purchases also brought in taxes. And then there’s a major $134 million highway project, and border wall construction, which brought in even more, he said.

Similar factors were cited by other local border officials.

“This saved our county during the pandemic for sure,” Santa Cruz County Manager Jennifer St. John said of the massive SR-189 roadway project in Nogales.

“During the pandemic, people were doing a lot of online sales,” she added. “That’s why our sales tax was increased.”

“We feel that we were very blessed to have weathered it so well,” said Monica Miranda, the finance manager for Douglas, which implemented a 1-cent sales tax increase in late 2019 that she also credited with helping city finances during the pandemic. “We want to continue being conservative, and frugal in our spending, being fiscally responsible with the money. But yeah, we just feel that we were very blessed.”

Kissinger said these factors may have temporarily filled in the hole left by locked-out Sonoran shoppers, “but they’re not permanent solutions. We need those Mexican shoppers to be the permanent solution, we need them to cross that border like they always have.”

When the border eventually reopens to those people, he said it’s also important that measures be taken to bring down sometimes hours-long crossing wait times.

“If it takes them a long time to get across that border, they're going to start weighing options and looking for other avenues,” he said. “ And they've learned to live without it for a year-and-a-half.” 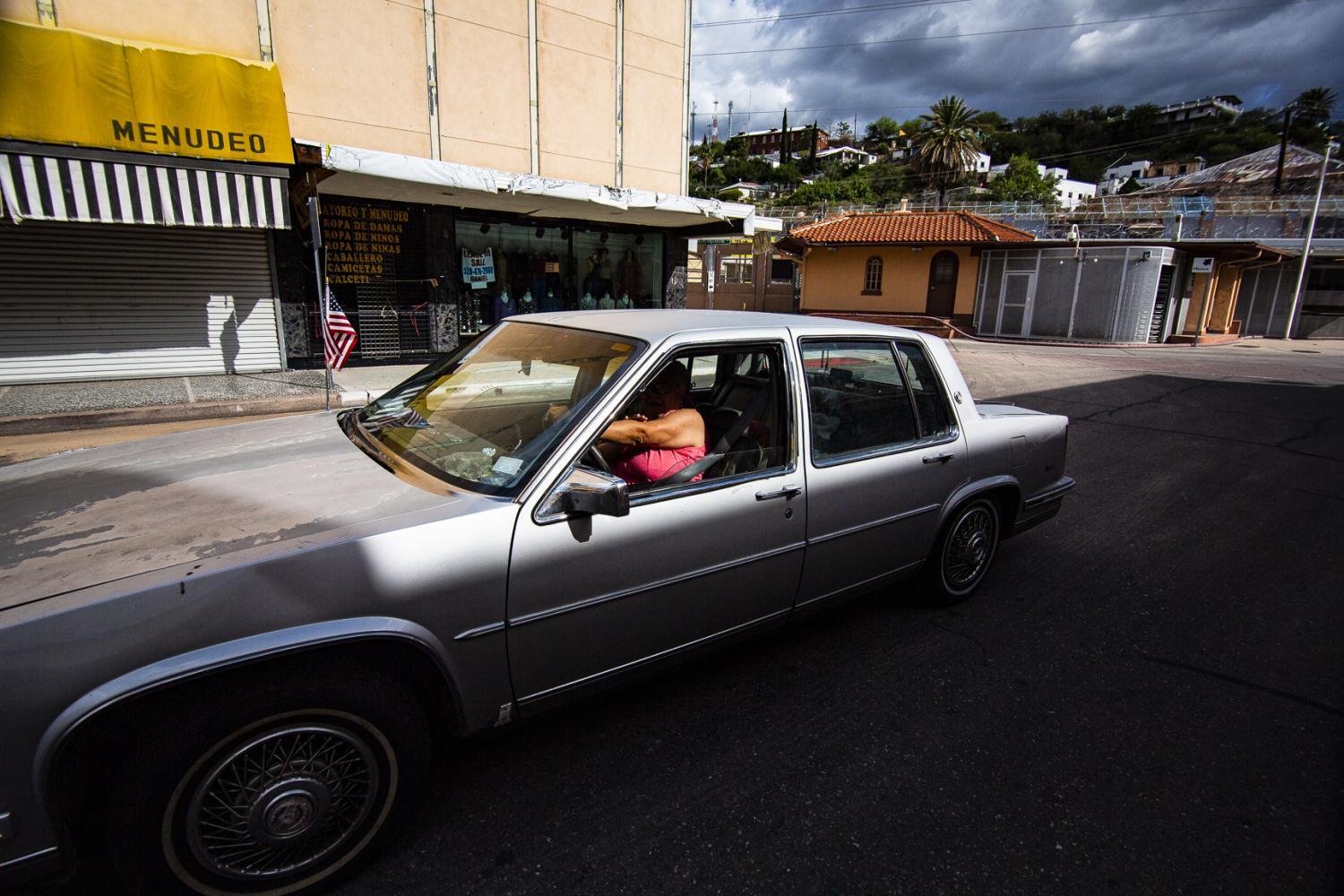 Murphy Woodhouse/KJZZ
A motorist stops for a bit on the otherwise empty Morley Avenue on Monday afternoon, just north of the border fence.

Too Late for Some

But even if the restrictions are lifted or eased soon, Kissinger and Kory agreed that for many downtown businesses it may already be too late. For many long-struggling stores, Kissinger said the pandemic “just put the final nail in the coffin.”

“I would say of the ones that are closed, 75% will stay closed,” Kory said. “So, a lot of them have already either moved out or relocated somewhere else to start a business.”

Some have even tried to start up in Nogales, Sonora, or elsewhere in Mexico, he said. But there could be opportunity in the harsh reality now seen on Morley: it has brought property values down, potentially opening the door to different kinds of businesses than the ones that once thrived.

"I think that maybe that is the silver lining, that now we realize how bad things can get for a business area, and we want it to survive and prosper,” he said. “So my hope is that people now see an opportunity to come in and do something new.”

The Kory family is going to stick with what they know, but for those businesses to survive to see whatever comes next for Morley, he said the restrictions need to go — and soon.