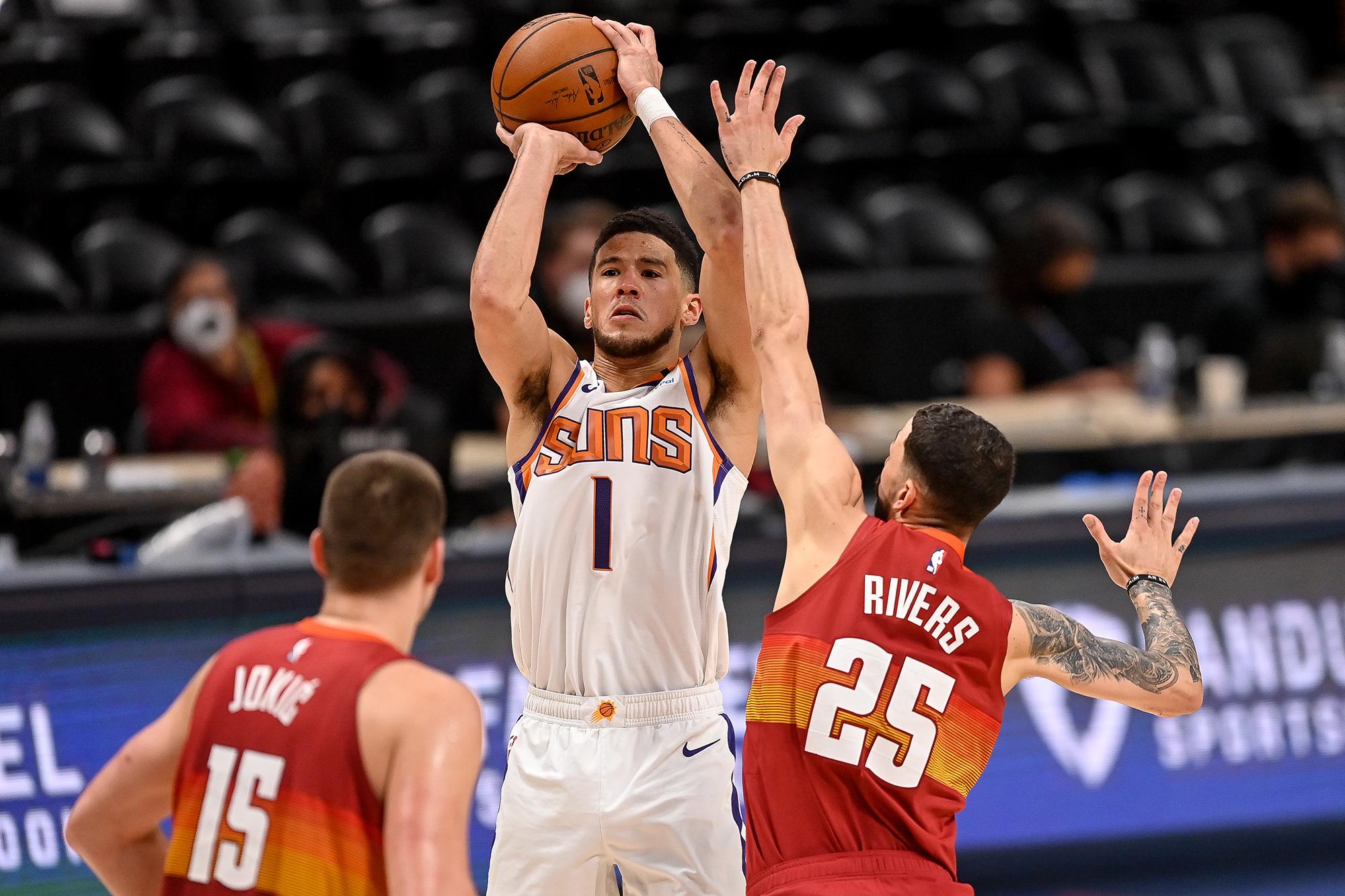 Dustin Bradford/Getty Images
Devin Booker takes a shot in Game 4 of the Suns' second-round series against the Nuggets on June 13, 2021 in Denver.

Giannis Antetokounmpo and the Bucks made the NBA Finals' return to Milwaukee a wake-up call for the Suns.

Antetokounmpo had 41 points, 13 rebounds and six assists, and the Bucks pounded Phoenix 120-100 on Sunday night, cutting the Suns' lead to 2-1.

The first NBA Finals game in Milwaukee since 1974 went to the home team in a romp, with Antetokounmpo and the bigger Bucks overwhelming the smallish Suns to the tune of a 20-2 advantage in second-chance points.

“We knew what type of game it was going to be,” Antetokounmpo said. “We knew we had to come here, play good basketball and compete as hard as possible.”

Game 4 is Wednesday night, with the series guaranteed to go back to Phoenix afterward.

Antetokounmpo, who missed the last two games of the Eastern Conference finals because of a hyperextended left knee and was no sure thing to even be ready to start this series, followed up his 42-point, 12-rebound performance in Game 2 by doing it all again — even making his free throws this time.

Back in front of his own fans and free of the loud counts he's been hearing on the road, Antetokounmpo went 13 of 17 at the line.

Chris Paul had 19 points and nine assists, but the Suns got next to nothing from his star backcourt mate. Devin Booker shot 3 for 14, scoring just 10 points.

Jrue Holiday bounced back from two poor games in Phoenix with five 3-pointers and 21 points to get the Bucks going again onto the comeback trail, having already overcome one 2-0 deficit in this postseason. Khris Middleton added 18.

Devin Booker struggled to find his rhythm in Game 3.

Fans broke out their “Bucks in 6! Bucks in 6!” chant as Milwaukee started to pull away in the first half and then again as the benches emptied with the final minutes.

“We knew what we had to do,” Holiday said. “We’ve been in this position before. We knew what this game meant to us and meant to the city.”

The Bucks are seeking their second NBA title and hadn’t even played for one in 47 years. They grabbed control of this game by outscoring Phoenix 30-9 over the last nine minutes of the second quarter, then ending the third with a 16-0 finish.

Milwaukee fans didn’t get to cheer as much as they wanted early after a strong start by the Suns, who got 12 points from Deandre Ayton in the opening period.

But Ayton was hampered by foul trouble and the Bucks soon ran by the Suns and kept right on going.

Antetokounmpo had seven straight points to finish a 9-0 run in the second that gave Milwaukee a six-point lead, and after Phoenix scored four straight, the Bucks took off again on a 16-3 run.

Bobby Portis had the last two baskets in the half, finishing off a pretty fast break with a dunk for one of them, and it was 60-45 at the break.

The lead was 13 with under eight minutes left in the third when Cam Johnson took a pass near midcourt with an open path to the basket. P.J. Tucker tried to step in but was too late, and Johnson threw it down over him while drawing the foul.

That triggered a 14-5 run that cut it to 74-70 and seemed to have the Suns back into the game. Just as quickly, they were out of it again.

Holiday made two 3-pointers in the next minute and Milwaukee pushed the lead back to nine, and by the end of the third it had ballooned to 98-76.

The Bucks, who lost the first two games against Brooklyn in the second round, avoided falling into a 3-0 hole from which no NBA team has escaped.

They limited the Suns to nine 3-pointers after Phoenix hit 20 in its Game 2 victory.

Ayton and Jae Crowder each had 18 points for the Suns. But Mikal Bridges, who had a career playoff-high 27 in Game 2, took only four shots and had four points.

Torrey Craig had two points in 15 minutes after hurting his right knee in Game 2. He came up gingerly after lunging to save a bad pass by Paul that went out of bounds in the second quarter. Frank Kaminsky, the former college player of the year at Wisconsin, had six points after going scoreless in the two games in Phoenix.

All In The Family

Monty Williams, in his second season as coach, said he has received text messages from Steve Nash and others from the Suns' past as he tries to lead the organization to its first title.