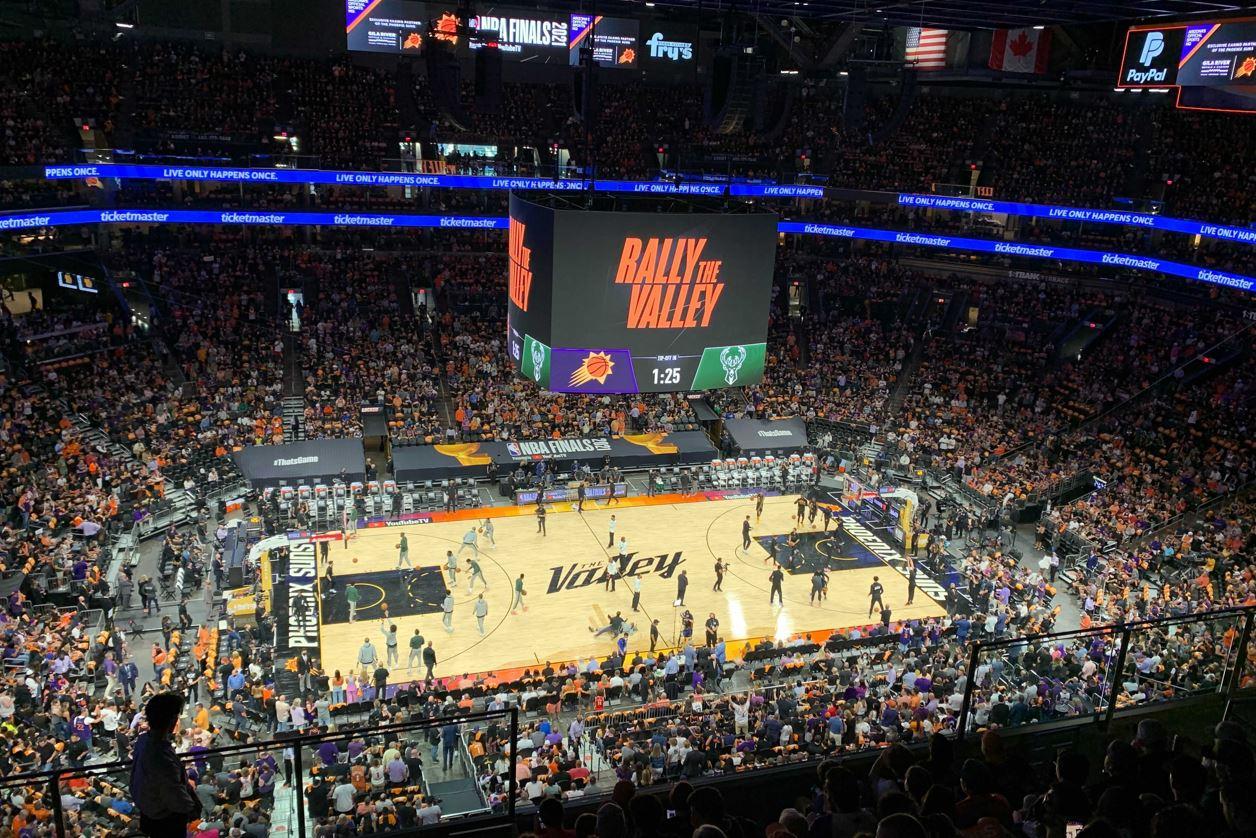 Tim Agne/KJZZ
The Phoenix Suns warm up before the start of Game 1 of the NBA Finals against the Milwaukee Bucks on July 6, 2021.

Chris Paul delivered an NBA Finals debut that was well worth his lengthy wait.

A few more games like this one, and the Suns might finally bring the championship to Phoenix.

Paul had 32 points and nine assists, Devin Booker scored 27 points and the Suns beat the returning Giannis Antetokounmpo and his Milwaukee Bucks 118-105 on Tuesday night in Game 1.

Paul scored 16 points during a sensational third quarter that had Phoenix fans who waited 28 years to see the NBA Finals again screaming in delight.

“We’ve been building all season long for these moments,” Paul said. "We’re going to keep playing. This is just one game. We’ve got to stay locked in.”

Finally playing for the title in his 16th season, the star point guard has the Suns in the NBA Finals for only the third time, and it sure looked as if they could make this ending different than the other two.

Deandre Ayton added 22 points and 19 rebounds to continue his breakout stretch of play in his first postseason.

Antetokounmpo had 20 points and 17 rebounds after missing two games with a hyperextended left knee. Khris Middleton scored 29 points, but the Bucks will have to play from behind again after dropping Game 1 for the third straight series.

The series opener was the first NBA Finals game in Phoenix since Michael Jordan’s Chicago Bulls won their third straight championship here in Game 6 in 1993. The Suns, who came into the NBA with the Bucks in 1968, made their only other finals appearance in 1976.

They hadn’t even made the playoffs since 2010 and just two years ago were last in the Western Conference with a 19-63 record.

But Booker was already headed for stardom by then, and 2018 No. 1 pick Ayton has played at that level in the postseason. Paul has been steady as always since his arrival in an offseason trade.

Now 36 and a 10-time All-NBA selection, he is on the list of best players to never win a championship. It appeared he might never even get to play for one until Oklahoma City dealt him to a team of Suns on the rise, and he might be the final piece that takes them all the way to the top.

Despite so many debuts on the finals stage — the Suns’ Jae Crowder was the only player who had appeared in them, and that was in the one played at a neutral site last year for Miami — there didn’t appear to be many first-time jitters.

Both teams started well in a competitive first half. The biggest lead was eight, with Mikal Bridges’ 3-pointer making it 57-49 at the break.

But Paul shifted the Suns into another gear in the third. His opening jumper provided the first double-digit lead of the game, and he followed with a four-point play for the Suns’ next basket.

He scored eight straight Phoenix points later in the period, hitting a 3-pointer, dancing around Bobby Portis for a layup and then hitting another 3. He then fired a pass to Ayton, who was fouled and made both free throws to make it 88-68 with 2:20 left.

“Their pick-and-roll game is tough to guard," Bucks coach Mike Budenholzer said. "I think we’ve just got to keep getting better. We’ll look at the film. We’ll see how we can maybe take away some of the rhythm.”

The Bucks cut it down to seven near the midpoint of the fourth before Paul helped the Suns restore a safe margin. He found Booker for a 3-pointer, stole the ball from Middleton and then hit a jumper to make it 106-94.

Milwaukee also is making its third finals appearance, having won the title in 1971 but not getting another chance since losing in 1974. The Bucks got a boost for this appearance when Antetokounmpo worked his way back quickly from an injury that looked serious when it happened.

The two-time MVP missed the final two games of the Eastern Conference finals with a hyperextended left knee. He was listed as doubtful for the opener, but he was upgraded to questionable Tuesday and then inserted into the starting lineup after he worked out on the court before the game.

The Bucks threw a lob to Antetokounmpo on their first possession — a play similar to the one he was defending when he was injured in Game 4 of the Eastern Conference finals against Atlanta — and he seemed to attack the basket just as forcefully as always.

But Jrue Holiday, who played so well while Antetokounmpo was out, shot just 4 for 14 and scored 10 points.