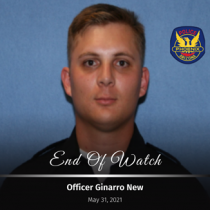 A Phoenix police officer was killed this week in a violent crash authorities say was caused by a driver who ran a red light and also died.

Funeral services for the officer are expected in the coming week.

Late Monday, Officer Ginarro New was southbound on Cave Creek Road in a patrol SUV. His vehicle was hit in the Greenway Parkway intersection by a car authorities said ran the red light. The force of the crash sent the police SUV through a block wall and into a parking lot.

“It was such a horrific accident. There was a high rate of speed,” said Phoenix Police Foundation President Timothy Thomas

“He served his country as a Marine before joining the Phoenix Police Dept.,” said Thomas

The Phoenix Police Foundation is raising money for New’s widow with donations being taken online and at the crash site.