Unprecedented Outbreak Of Side Blooms On Saguaros In Arizona 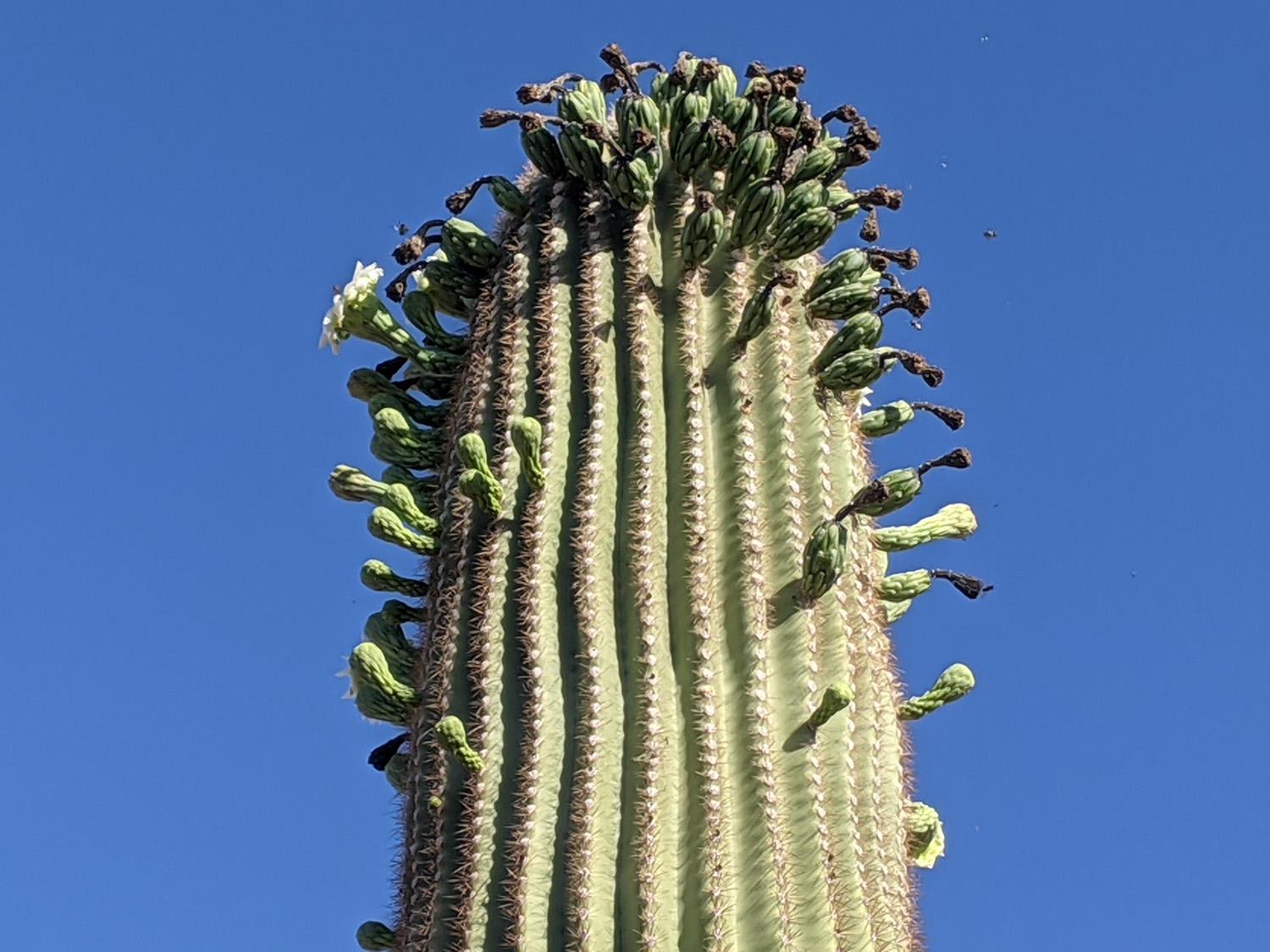 Sky Schaudt/KJZZ
Multiple flowers sprouting on a saguaro cactus at a Phoenix home on June 1, 2021.

Cactus experts are tracking an unprecedented outbreak of “side blooms” on saguaros across southern Arizona this year.

Typically, the giant cactuses sprout flowers only around the tips of their arms and trunks. But a large number of saguaros also are pushing out buds farther down their stems this year.

Research ecologist Bill Peachey told the Arizona Daily Star that he has received reports of saguaros blooming in strange places from the Phoenix area to as far south as San Carlos, Mexico.

The exact cause is unclear, but experts agree the rare display is a sign of distress.

Ben Wilder, director of the University of Arizona’s Desert Laboratory, said last year was the driest on record in Tucson and he suspects this year’s strange bloom is a response to that.

Although he can’t prove it, Wilder said what’s happening now could be fallout from a run of record heat in 2017 that damaged many of the cactuses, disrupting their development.

Drought since then has only made things worse, according to Peachey.

“The last several years haven’t been good for saguaros, so they haven’t grown much,” he told the Star.

As a result, the plants have fewer new spine clusters — known as areoles — from which flowers typically sprout, so they are “reactivating” old, unused budding locations farther down the stem.

Peachy has been studying the same, 2-acre grove of saguaros near Colossal Cave since 1997 and said he’s never seen anything like this.

In addition to the side blooms, some saguaros on Peachey’s plot are sporting crowns of flowers that are more tightly packed than usual.

The same thing is happening at Saguaro National Park, where visitors have been asking a lot of questions lately that staff members can’t answer just yet.

Other columnar cactuses like the organ pipe and the Mexican giant cardon regularly sprout flowers along the sides of their stems. Saguaros almost never do — at least until recently.

Long-time park biologist Don Swann said the park launched a multiyear study of the unusual blooming activity after some limited reports of it in 2020.

“It’s just an interesting phenomenon that people had noticed but (that) hadn’t really been studied,” he said. “I don’t have data yet. We’re just sort of in the process of collecting data.”

Saguaros generally produce flowers in early May and bear fruit in early summer.

Their waxy white blossoms only stay open for a single day — just long enough, if they’re lucky, to be cross-pollinated by a honey bee, bat or bird.

Peachey said the seeds with the best chance for success tend to come from fruit produced during the last week to 10 days of June, “just in time to catch that first monsoon.”

The Show spoke with Arizona Daily Star reporter Henry Brean, who has been covering the phenomenon.