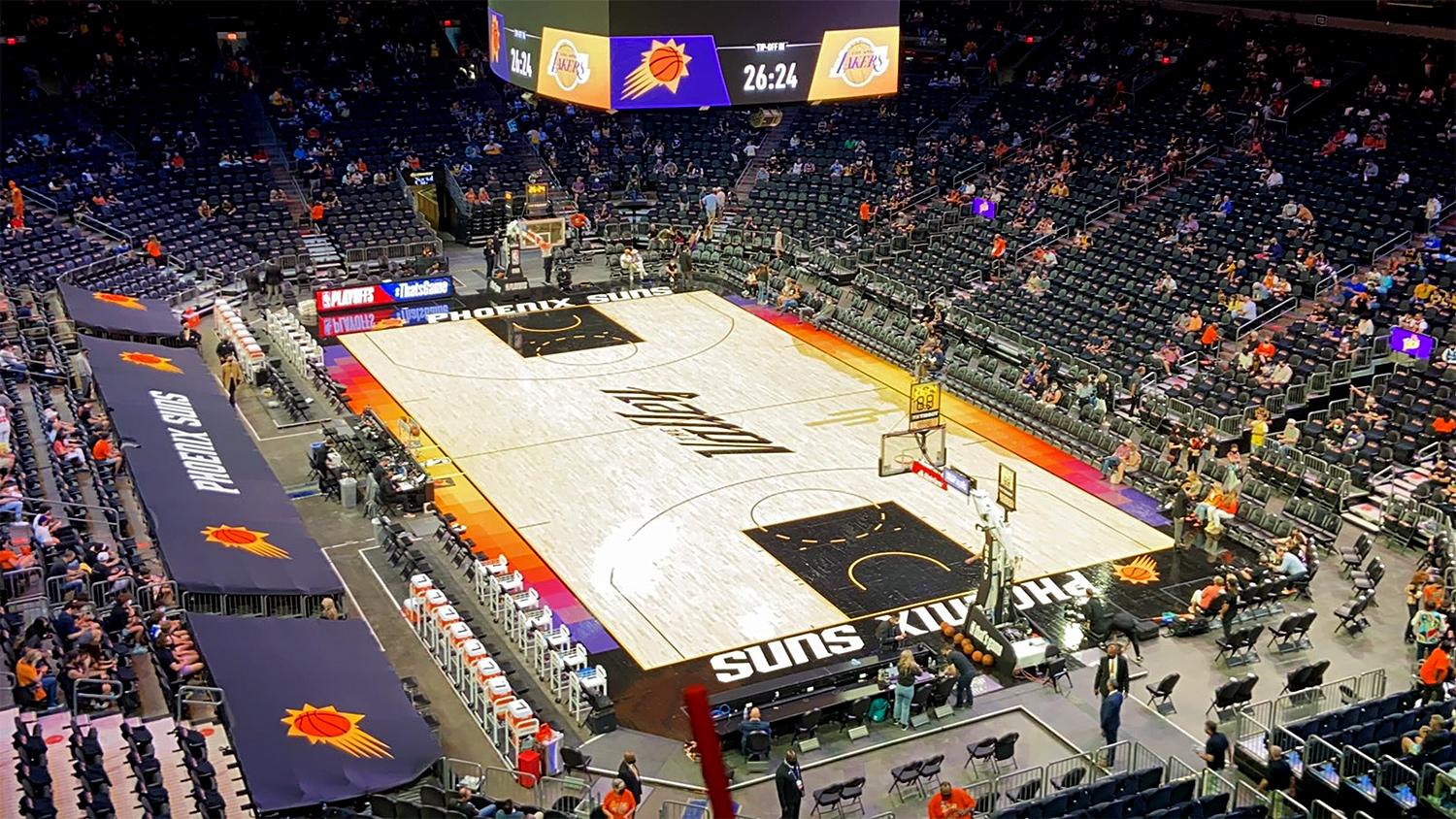 Vaughan Jones/KJZZ
A view of the court at Phoenix Suns Arena before Game 1 against the Los Angeles Lakers on May 23, 2021.

It was the first playoff game for several Suns players, including Booker, Ayton and Mikal Bridges, but they didn't look like postseason rookies against LeBron James and the Lakers. They helped Phoenix offset a tough game for veteran All-Star point guard Chris Paul, who didn't look healthy after a right shoulder injury in the second quarter.

That's about the time things got a little rowdy. L.A.'s Alex Caruso and Phoenix's Cameron Payne got into an altercation near the sideline after Payne knocked Caruso to the ground. L.A.'s Montrezl Harrell jumped into the fray and both teams had to be separated. Caruso and Harrell were each given a technical foul, and Payne was given two technicals and ejected.

But Booker kept making shots and Ayton was a force on the glass, finishing with eight offense rebounds and shooting 10 of 11 from the field. The Lakers never got within striking distance in the final minutes.

Game 2 is Tuesday night in Phoenix.

It was an eventful first half that saw the Suns take a 53-45 lead.

James hit two early 3s but Phoenix responded with its own flurry from long range. Jae Crowder’s 3-pointer made it 24-17 with 4:18 left in the first quarter and Lakers coach Frank Vogel called his second timeout. Phoenix had a 32-25 lead after the first.

But the festive atmosphere in Phoenix turned to a stunned silence early in the second quarter when Paul bumped into teammate Cameron Johnson and fell to the floor in obvious pain while holding his right shoulder. He was down for a couple minutes — surrounded by players from both teams — before slowly walking off the floor with a towel over his head.

The 36-year-old star returned a few minutes later to a huge roar from the crowd, but didn't look right. He was dribbling mostly with his left hand and missed the only shot he took before halftime.

Booker had 17 points before the break on 8-of-14 shooting and Ayton added 14.

The Lakers needed to beat Golden State on Wednesday in the play-in tournament just to earn the No. 7 seed in the playoffs. But they still came into the series as the slight betting favorites over the second-seeded Suns, according to FanDuel.

The Suns announced capacity for Sunday's game was 11,000, but it felt like more were in an arena that holds a little more than 18,000. It was the first time there was more than 10,000 allowed in the newly-renovated arena.