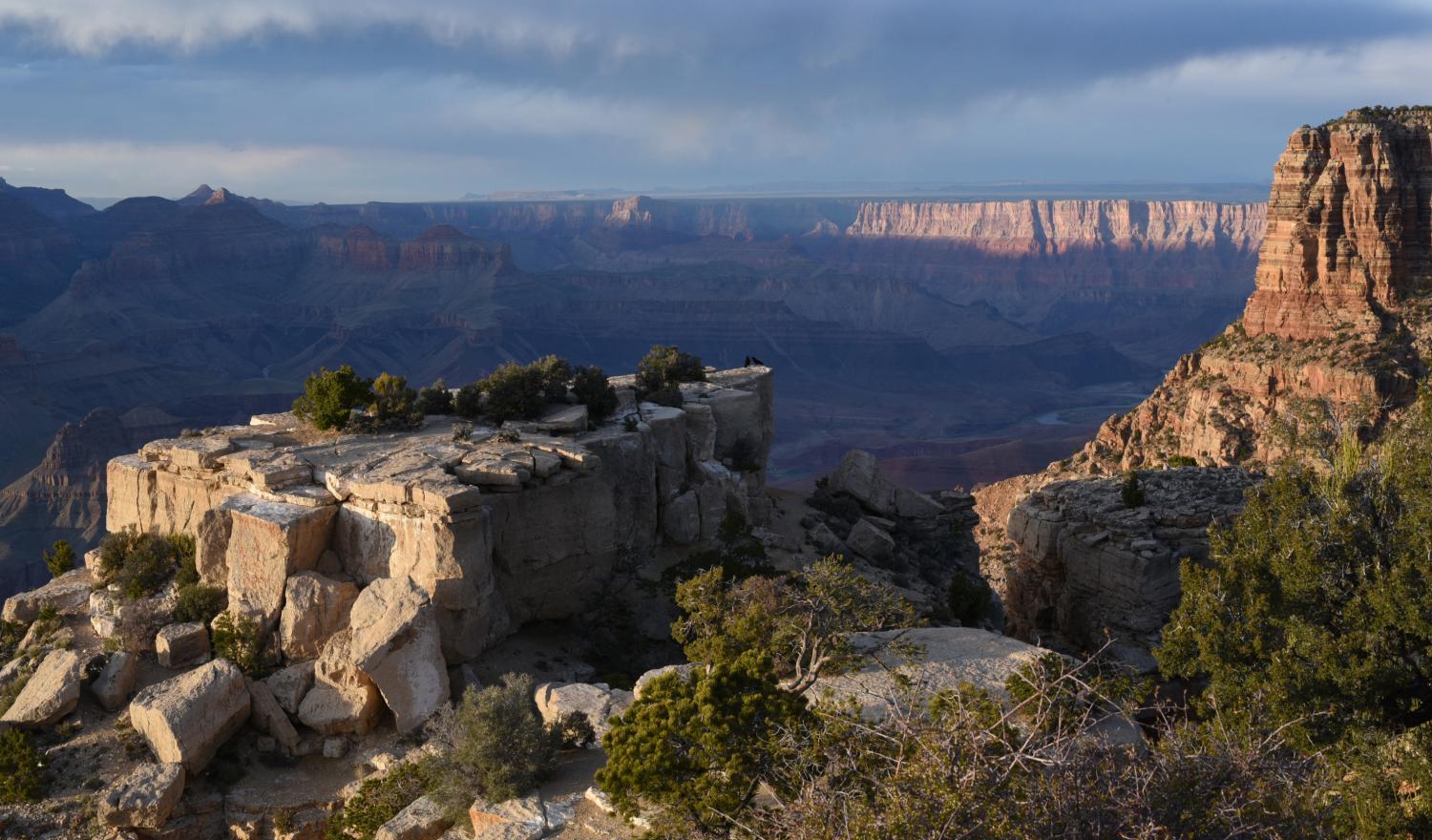 Ron Dungan
Visitors to the Grand Canyon must rely on groundwater.

The University of Kentucky geologist started learning about caves as a young man, in part because his mother was a geologist, and a childhood fascination grew over time.

“Caves are a really special place in many ways,” Tobin said.

When he was in college, an internship in Arkansas doing cave tours got him hooked, and eventually his work brought him out West, to Grand Canyon National Park.

Tobin specializes in what’s known as karst hydrology. These are underground systems made up of soluble rock such as limestone. To Tobin, caves are like another world, with blind animals, fossils and archeological finds. If you take a moment, you may find small arachnids called pseudoscorpions — scorpion-looking bugs without the tail.

“I mean everyone thinks of stalactites and stalagmites,” he said, “but then we also have these huge, like, gypsum curls that can be multiple feet long that are, often they look like toothpaste being squeezed out of a toothpaste tube.” 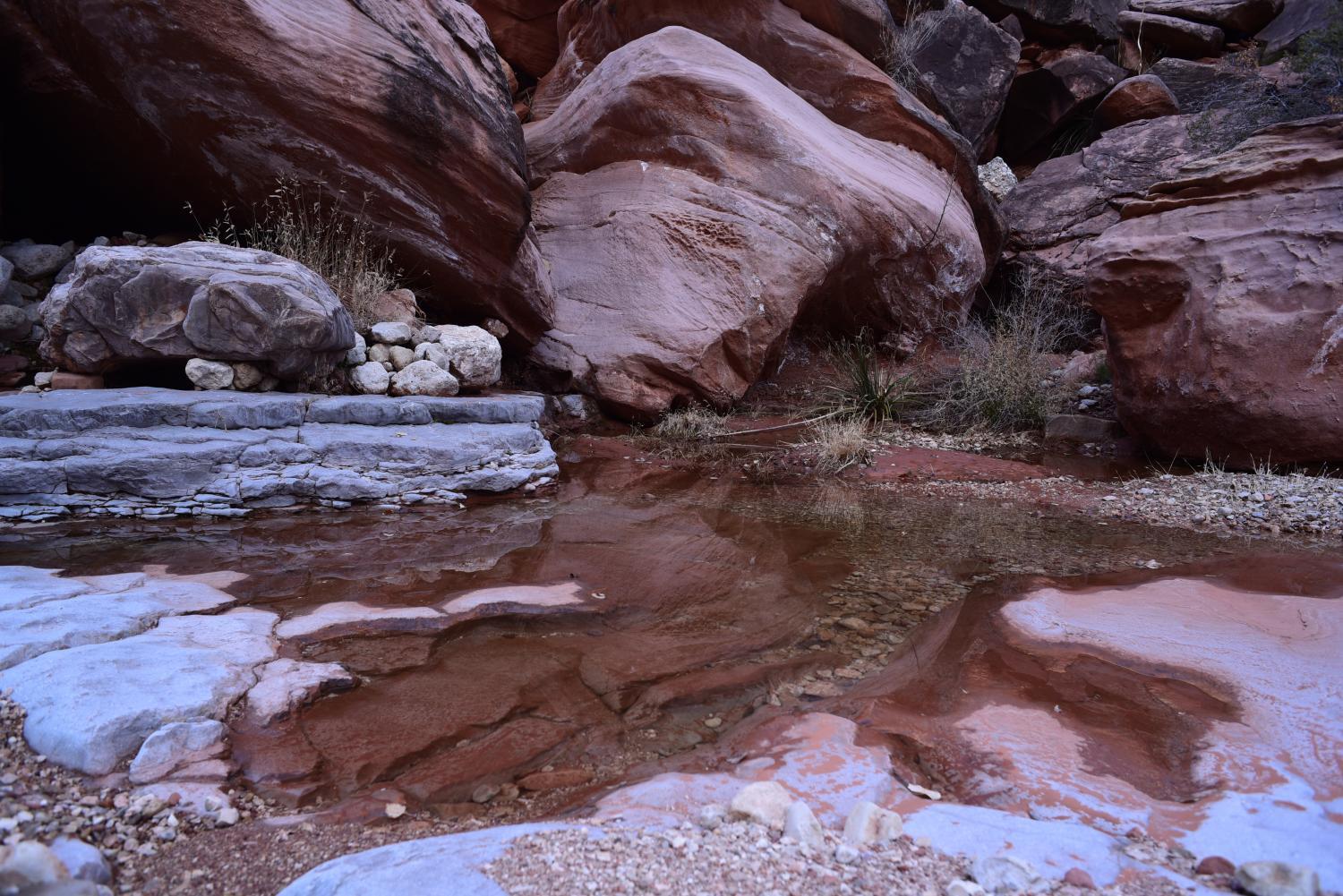 Ron Dungan
Water pools in a tributary of Kanab Creek.

And caves transport water. Underground rivers start as rainwater and make their way through layers of rock, eventually emerging from the canyon’s walls. Tobin wanted to know how the water travels from top to bottom, so in a series of studies he started several years ago, Tobin’s research team placed fluorescent dye in sinkholes on the Kaibab Plateau, and then hiked down into the canyon to see where the dye came out.

“It was hiking the equivalent of from sea level, to the top of Mount Everest and back down, over the course of 200 miles,” Tobin said.

At first they thought the water would more or less go straight down.

“I joke about this a lot. Water is lazy. It just wants to go downhill. And so it just finds the easiest way down it can,” he said.

It flowed downhill, but also horizontally. Some of it showed up about 20 miles away from where researchers placed the dye. It showed up in different springs than the researchers predicted and in multiple locations.

“What was really confusing to me was that it never just flowed to one place, it always flowed to multiple places,” Tobin said.

Water may be lazy, but it’s not simple. Understanding the springs is important, he said, because about a quarter of the world’s population relies on water that comes from karst systems. And understanding the link between groundwater and surface water in the Colorado River system is a hot topic among researchers. That’s especially true in years like this one, where a modest-sized snowpack in the Rocky Mountains has turned into a severely diminished runoff because of record-dry soils throughout the basin.

“We’re trying to understand how water gets down to this kind of big, regional aquifer,” he said.

The research also has implications for the future of the Grand Canyon and surrounding communities.

Abe Springer, a geologist at Northern Arizona University, has spent much of his career studying side canyons and the water that flows in them. He says the water that pours from the canyon’s springs is essential to plant and animal life.

“Most people think the reason to go to the Grand Canyon is for the big ditch, or to float a river trip. But the real beauty and magic of the canyon are the spring-fed side canyons,” Springer said.

The National Park is home to more than 750 springs, Springer said. 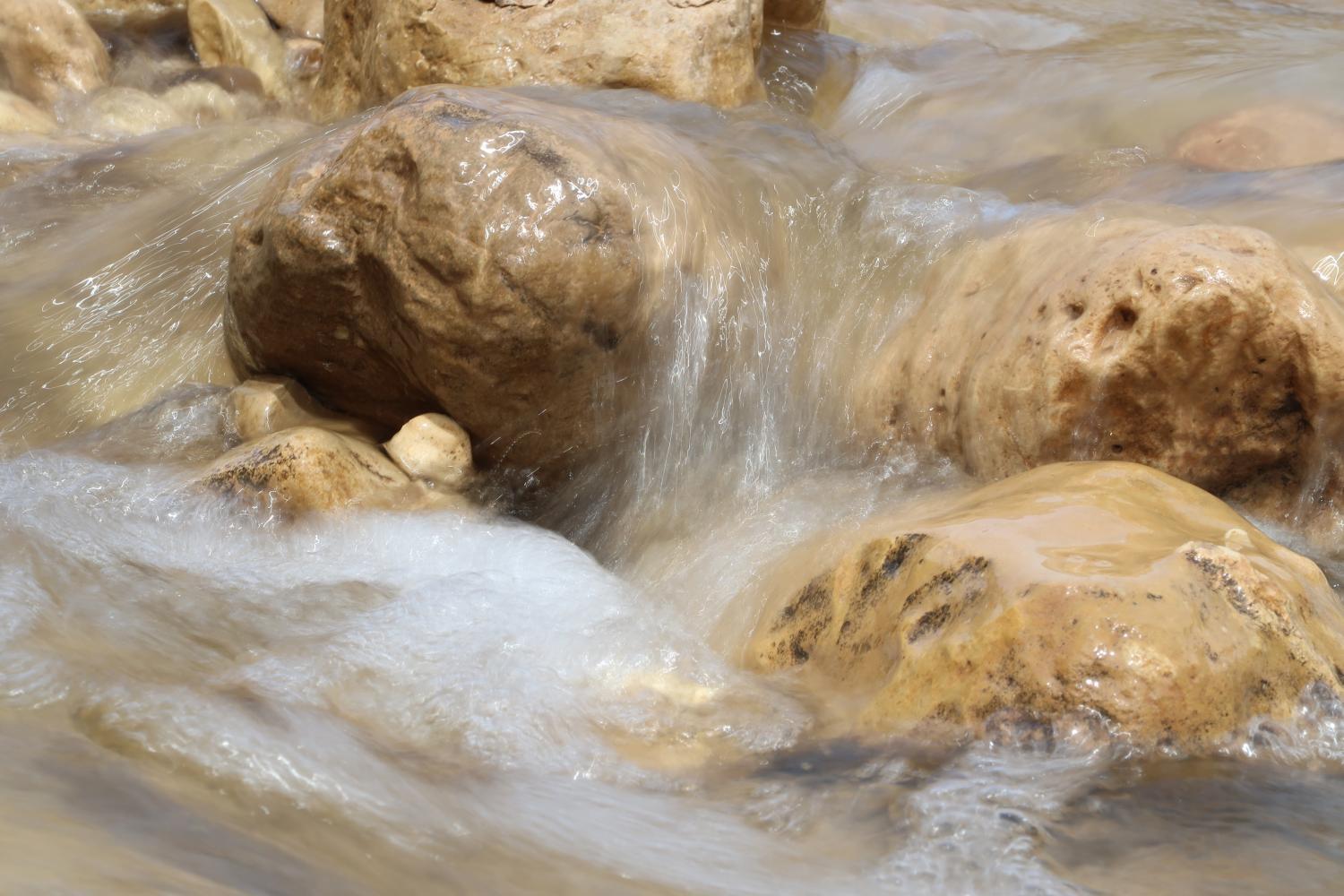 Ron Dungan
Kanab Creek, a tributary of the Grand Canyon.

But there’s another reason to understand how springs work. They make up a significant portion of the Colorado River’s flow. Springer says that river managers hone in on annual snowpack and the level at Lake Mead when they assess the regional water supply. The system is much more complicated, he said.

A lot of that groundwater comes from the Colorado River’s Upper Basin. Understanding that interaction is the subject of a new U.S. Geological Survey project that calls for the installation of groundwater and surface water measuring devices at the river’s headwaters.

By the time the Colorado River gets to the Grand Canyon, its flow is spoken for. That means 6 million park visitors, local communities and tribes have to rely on springs and wells for drinking water supplies.

Climate change is already diminishing the Colorado River’s flow. Fluctuations in precipitation and temperature could affect the amount of water in the springs in a number of ways, Tobin said. Drought and evaporation may affect the amount of water going into the system, for example, and a longer, hotter growing season may mean that more plants will draw water from it.

“The importance of groundwater in the Grand Canyon region cannot be overstated,” said Fred Tillman, of the U.S. Geological Survey. “There’s almost no area where groundwater is more critical than in that Grand Canyon area, even though the Colorado River is right there. They don’t have access or rights to it.”

In recent years, new resorts, uranium mines and other development projects have been proposed in the Grand Canyon region. Critics say there’s not enough water and that new demands could upset its unique network of springs. And with climate change, there may be even less to go around in the future.