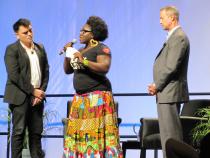 Activists took over a Phoenix town hall meeting with Democratic presidential candidates Saturday. The group successfully dominated the rest of the conversation.

Dozens of Black Lives Matter demonstrators marched to the front of the room as former Maryland Gov. Martin O'Malley was talking about how he changed policing in Baltimore.

Arizona Organizer Tia Oso with the group Black Alliance for Just Immigration got on stage and took the microphone.

“Will you advance a racial justice agenda that will dismantle not reform, not make progress but will begin to dismantle structural racism in the United States?” Oso asked.

The activists kept control of the room even when Vermont Senator Bernie Sanders came on stage, and he only spoke briefly.

The Sanders campaign rally later that night at the Phoenix Convention Center drew more than 11,000 people and there no interruptions.