Download mp3 (7.41 MB)
Coverage of aging is supported in part by AARP Arizona 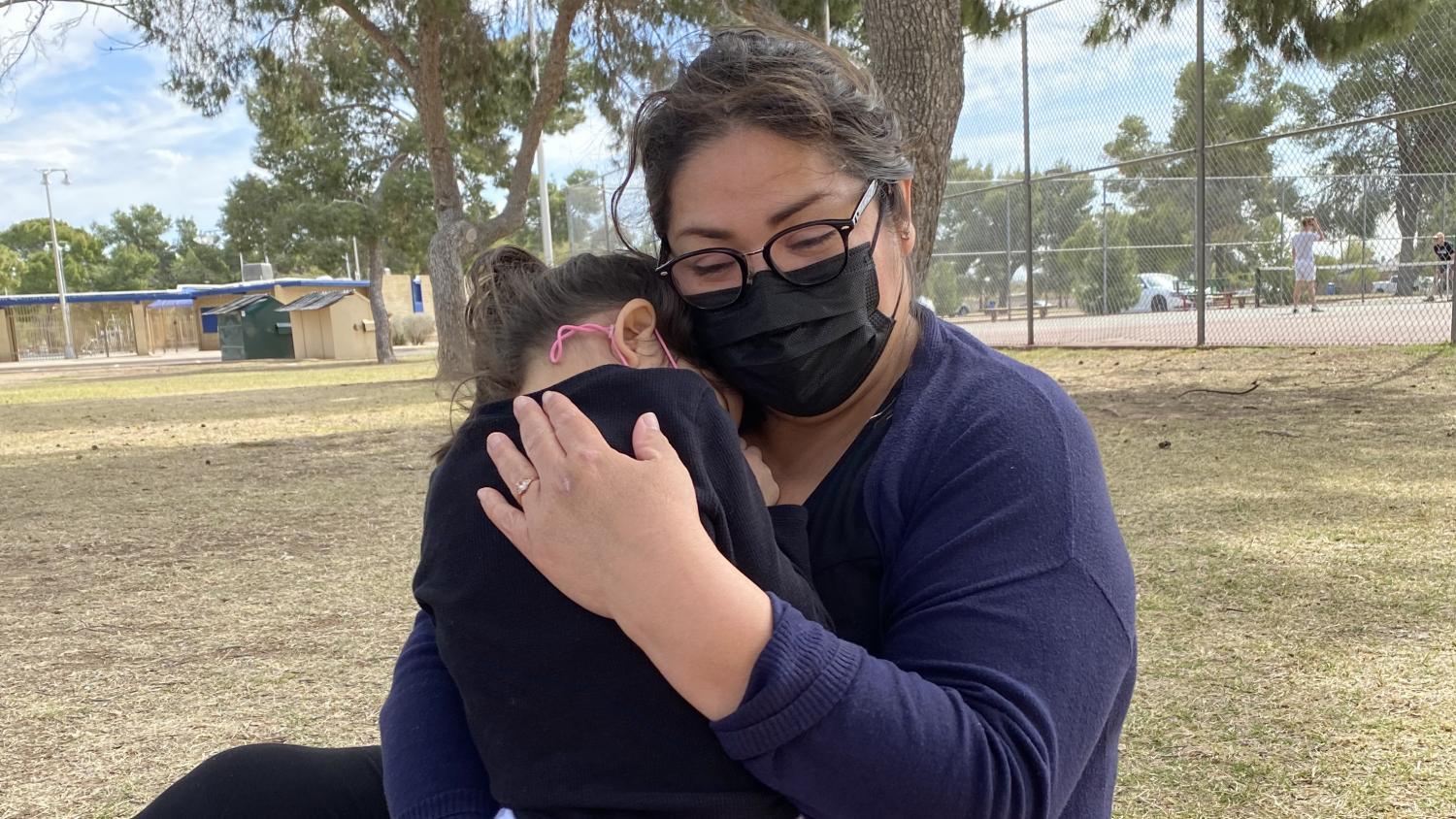 Yesenia Villalobos
Yesenia Villalobos is her mother's caregiver. Her mom was diagnosed with early-onset Alzheimer's disease. She and her husband, along with their then-1-year-old daughter, moved to Phoenix more than three years ago.

The coronavirus pandemic has exposed many deep societal fissures. A big one is the caregiving burden, which, more often than not, falls on the shoulders of women. We saw this with working mothers who left the labor force to care for their children. The same challenges face adult daughters who are caring for aging parents.

But these women were making professional and personal sacrifices long before the pandemic.

→ An Aging Population Means More Husbands, Sons Will Be Caregivers

It’s a windy Tuesday morning. Yesenia Villalobos is at Cactus Park in Phoenix along with her 4-year-old daughter. Villalobos moved to Phoenix from Los Angeles in 2018 to help care for her aging parents

"So our plan was [that I would] have a part-time job," explained Villalobos about coming home to Arizona. In fact, she already had something in the works. "It was going to be pretty sweet — I [could] work from home, flexible hours."

But then her mom was diagnosed with lymphoma, a form of cancer. So instead of pursuing the job, Villalobos became a full-time caregiver.

"I just assumed this would be maybe a few months, or maybe half a year or something. And then we [could] go back to normal," she said.

Then, the other shoe dropped.

"I started noticing her struggling with memory or even like walking around the house she would forget where her room was or she would ask the same question, like, within a five-minute span."

Her mom was eventually diagnosed with early-onset Alzheimer’s disease in early 2020. Villalobos was also dealing with the pandemic. At the time it was a lot.

"I've had some really rough days where I have to question like, ‘Can I do this?’" Villalobos said.

She also worries about the future from a career and retirement standpoint. Villalobos is 43 and in some ways, the clock is ticking.

"I feel like, am I going to be so out of it, because I've been out of the workforce for three years already, like, do I have to get recertified?" she wonders. "I'm just thinking of all these things, where you feel like you might need to do more in order to get back in."

Number Of Unpaid Family Caregivers On The Rise

More than one in five adults are unpaid caregivers and 61% are women, according to the National Alliance for Caregiving and AARP's "Caregiving in the U.S. 2020" study.

And most of them also have a full-time paid job.

Boston-based Liz O’Donnell is an author and founder of “Working Daughter,” a community for women who are balancing caregiving, careers and kids.

"And the reason it was important to me to create that term was because I think people understand 'working mothers' and so to draw the parallel from working mother/working daughter, I felt like it was something people go, 'Oh, aha. I get it,'" she explained.

As a working daughter herself — O’Donnell’s father had Alzheimer’s disease and her mother had ovarian cancer — she struggled.

"And I felt so alone," she said. "I didn't realize that there were tens of millions of family caregivers, because this was 2014."

O’Donnell says “working daughters” are where “working mothers” were 10 years ago. And she might be right. A 2020 study by S&P Global and AARP examined corporate America’s family-leave policies. It found that some companies are not familiar with the issue of family caregiving and their policies tend to benefit working parents.

One reason why: optics.

"So caregivers are still afraid to self-identify at work. People are still agonizing today, ‘Do I tell my boss or my company that I'm caring for an aging mother or father?’ ‘Will that make me look like I'm not committed or I can't be relied on?" O’Donnell said.

'I Have To Be Cautious About What's To Come'

Thirty-nine-year-old Brandi Melancon is a financial auditor for a government agency. She had to tell her employers what was going on at home. That’s because her mother has early-onset Alzheimer’s disease. And getting a diagnosis can mean lots of doctor’s appointments. Fortunately, she says, her employers have been understanding and flexible. Still, like Villalobos, its hard not to think about the future.

"Right now, my mom is super independent," Melancon said. "[But] I want to start a family as well. But I have to be cautious about what's to come." 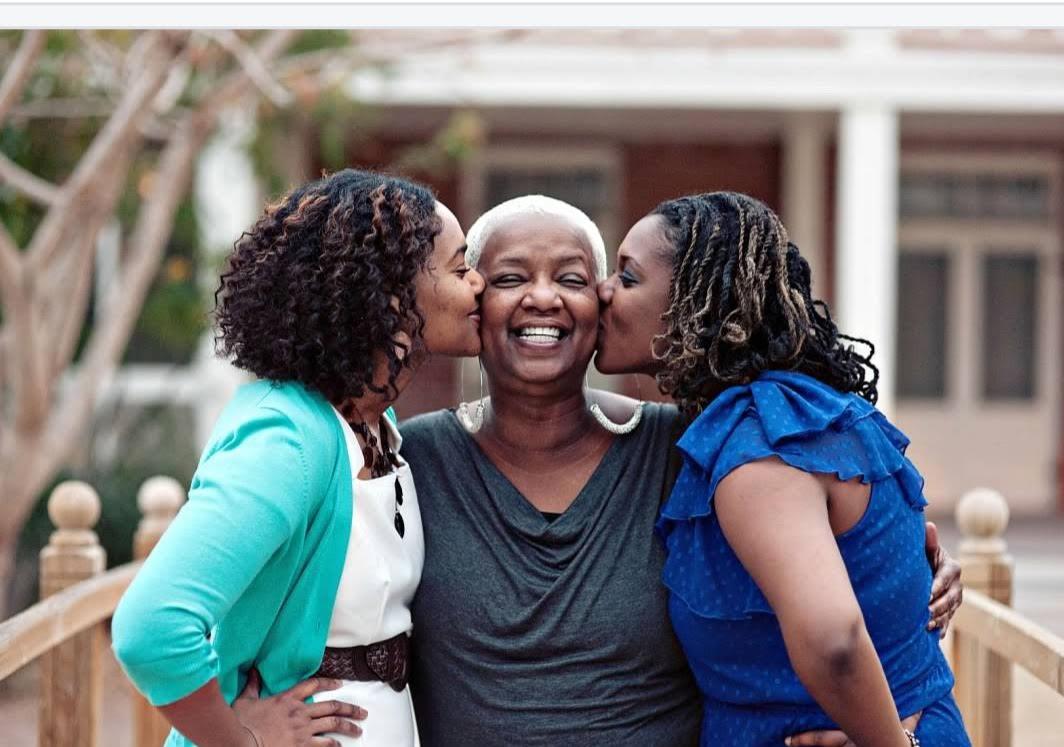 Brandi Melancon
Brandi Melancon (left) has a full-time job, and her mother, Jacque Bell (center), lives with her and has early-onset Alzheimer's. They're pictured here with Melancon's sister.

Because Alzheimer’s disease is progressive. There is no cure and no real way to slow it down.

"I know she wants to have a family and everything," said Jacque Bell, Melancon’s mom. "I just don't want to be a burden. I want to be more of an asset than a burden."

And like most moms, she wants to be there — for both her daughters — for as long as she can.

"So if there's anything I could do for them. I'm still going do it. I do remember that," Bell said.

It’s a touching moment between the two.

"So, my hope is that she's able to be there to help and to recognize, you know, however long that may be," said Melancon.

Women like the ones in this story will likely continue to do double, sometimes triple duty, but something’s going to have to give.

The Census Bureau projects that people age 65 and over will outnumber children for the first time ever beginning in 2034. Which means many employers are going to be forced to offer family-caregiving benefits in order to keep their workforce.