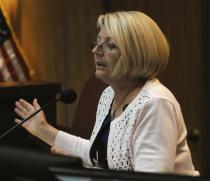 Arizona Senate President Karen Fann is denying that anyone involved in a sweeping audit of the 2020 election in Maricopa County has links to conspiracies of stolen elections or fraud.

The Prescott Republican responded to unearthed tweeted by Cyber Ninjas owner Doug Logan, who promoted theories that the election was stolen from former President Donald Trump. The Arizona Mirror first reported about Logan’s social media posts. Senate Republicans hired his firm to conduct yet another audit of the election in Maricopa County.

Fann accused the media of ginning up controversy.

"I know that's what the media's going to try and spin," she told Capitol Media Services. "But you can't tell me they've been involved in conspiracy theories."

Logan’s history didn’t sit well with some Maricopa County supervisors, whom Fann is trying to persuade to assist with the audit. Despite issuing a subpoena that demanded voting materials, including 2.1 million ballots, be delivered to the state Capitol, Fann has now asked the county to open its election headquarters to her private auditing team.

County officials have so far balked at the idea. Democratic Supervisor Steve Gallardo said the county should do no more than abide by a court order declaring the subpoena of voting records legitimate and enforceable.

“I don’t plan on going above and beyond what is outlined in the subpoena,” which makes no mention of the Senate using county facilities, Gallardo said.

Later Thursday afternoon, Maricopa County Board Chairman Jack Sellers staked out a similar position for the entire board. His announcement included a letter from county attorneys, sent to the Senate’s counsel, noting that the county “stands ready to comply with the subpoenas as written.”

“To be clear, the Senate asked the county to not deliver the ballots and the equipment until they acquire a place to put them,” Sellers said in a statement. “We are still waiting for instructions so the county may complete the actions required under the subpoenas authored by President Fann and Judicial Chairman (Warren) Petersen.”

That leaves open the question of where the audit will occur, and how soon it can begin. Fann told Capitol Media Services she has “a few other possible locations” in mind.

In a message to all the supervisors, Fann also announced she has brought on Ken Bennett, a former secretary of state and longshot Republican candidate for governor in 2018, as a “liaison” during the audit. Bennett told KJZZ that means he’ll be the go-between for Fann, the firms she hired, and the county.

He described his role as an unpaid, volunteer position.

“I don’t want there to be any hint or allegations of ulterior motives,” he said.

“I’m doing this because I love the state of Arizona, and I want to make sure that our elections are secure going forward,” Bennett said.

Bennett met with Sellers on Thursday morning, but was unable to persuade the chairman to allow the audit to occur in county facilities.