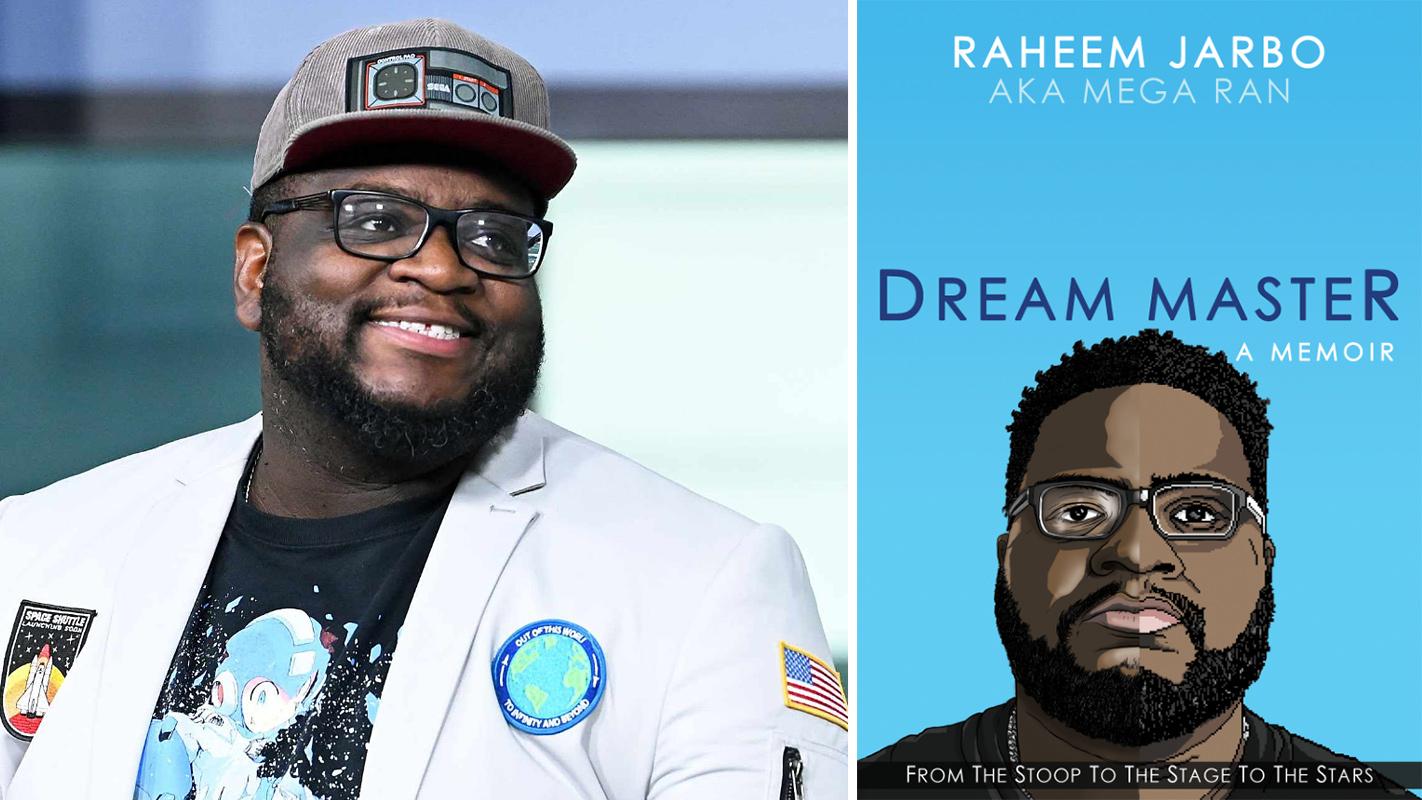 Mega Ran
Raheem "Mega Ran" Jarbo, author of "Dream Master - a Memoir: From the Stoop to the Stage to the Stars."

STEVE GOLDSTEIN: Music is a part of everyday life for many of us, it can help us have fun, get through rough moments and lead to thinking about the world and other people in different ways. Rapper Raheem Jarbo, also known as Mega Ran, brings all of that and more to his music.

Mega Ran's song, "The Day the Robots Took Over," plays.

GOLDSTEIN: His most recent work focused on social justice following the killing of George Floyd in Minneapolis, but he also brings positivity and a love of video games to his nerdcore compositions. He has a new autobiography, too, that is called "Dream Master - a Memoir: From the Stoop to the Stage to the Stars." And he is with me. Raheem, you wrote in your book about the impact the murder of your uncle had on the choices you decided to make going forward. Tell us more about that.

RAHEEM JARBO: It sounds kind of almost hokey, but I read a lot of comic books, so I realize that every hero story usually started with a tragedy. You know, there was a moment where something or someone was taken away that kind of helps them to reframe their focus. And I think for me, it was definitely my Uncle Bobby because of it being such a tragic random moment, but that was also tied into hip-hop, which I loved so much. And I felt like a part of me had turned me completely away from hip-hop. But then another side of me, it brought me completely back to hip hop, realizing that I could bring something different to this art form, that I didn't have to necessarily be what society told me that a hip-hop artist should look and sound like. And so, yeah, it was just such an important moment. And it's it's definitely the big inspiration behind not just what I do, but more importantly how I do it.

GOLDSTEIN: Well, let's dig in on that some more. You have a reputation for being positive, and sometimes that can emerge from having a lot of challenges and facing negativity. How does that ultimately play into your outlook and your work?

JARBO: Yeah, being positive is a huge part of my — I guess my brand, if you could say. But it definitely comes from all of the negative and all the adversity I've faced. I feel like there's enough negative in the world, and I may as well try to shine the other side of that. Unfortunately, if this was a beautiful, positive world, I'd feel like there wasn't really need for it. But I feel like, unfortunately, there is need for someone on the other side. I mean, just the idea of a hip-hop artist smiling or being happy or a Black man smiling and being happy are so taboo in our society. And that's why I thought it was so important to try my best to exude positivity, so that people can see the other side. That's what I've been all about. Just showing the underside that doesn't get all the shine, the light and showing people that everyone's human and every piece of you isn't one way when the camera's on are a different way when the camera's off, but just being your whole complete self and being comfortable with it.

GOLDSTEIN: Following last summer's killing of George Floyd and the protests and rallies that came after that, a lot of people said they were going to pay more attention to racial injustice in our society. Where does that fit for you in the creation of your music as it seems that more people are understanding this important message?

JARBO: I think it was Nina Simone who said an artist should reflect the times. And I've kind of lived by that. It kind of was the other way for me in this past summer, because I released an album called "Two Hands Up" in May 2020, which was literally a month before the country caught fire. And the entire album is about police brutality, about racism, about societal pressures and all of these things. And I feel like the timing couldn't have been better. But it was like literally right before, you know, the final match was thrown onto this blaze. And it's always been so important to me. And I think making that album was something that I had inside of me, but I never knew how to properly execute. And so I got to thank Young RJ, who was the producer and a part of that album, who really brought that out of me through his production and through the words that both of us had written. I knew that this was the perfect time to speak about it. Even the title "Two Hands Up" referring to "hands up, don't shoot" and a lot of the movements of the past that led to where we got to this summer. So absolutely, it's always been inside of me and been a part of me and my approach. But I think I decided to be a little more overt because I think the times called for it.

GOLDSTEIN: You also, even with all the other things you're doing, you have a great passion for video games. So that's going to give me the opportunity to ask you about nerdcore. How did all of that come together for you?

JARBO: Nerdcore, yes. I think being a gamer has a lot to do with, I think, being a part of the nerdcore subgenre. But it also just in general refers to a person who is passionate about anything. You know, you could be called a nerd about sports statistics, about shoes, about fashion. So anything that you're passionate about, I think, can become nerdcore. And there can always be a specialized group of people who will be interested in that thing. So for me, it's video games. For other people, it's coding and the life of just an outcast in general and maybe having trouble finding dates. And there's songs about all of it. You know, it could be Harry Potter, it could be literature. I've seen so many subgenres and subsets of nerdcore, which makes it really limitless. And so I've just been lucky enough to find my space in that within video games. And what I like to do is try to place myself or people who look like me or think like me into places where we've never been. So when I initially started this journey, I colored Mega Man Black. I made Mega Man African American, and this caused a huge uproar on the internet. Everybody's like, "But you can't. But, but, but ..." I'm sure it was the same as the initial reactions of like a Black Spider-Man or all these other things. So mainly it was just — for me anyway, it comes from the idea of Afrofuturism, which is basically an entire genre of fiction stories, books, a few movies that are basically placing African Americans into sci-fi, because for the longest time, we've never existed in these worlds. Because of a lack of inclusivity, we've had to create our own. And that's literally what I did by coloring Mega Man and pretending that I was Mega Man. And so now what I try to do with video games is just imagine myself or someone who thought or looked like me in these situations and how it would change the entire storyline. And that's a lot of what the music that I create now is. I'm just placing myself and my own walk of life into a place where it's literally never been represented. And from that, it's bred an infinite well of creative ideas.

GOLDSTEIN: And that is Raheem "Mega Ran" Jarbo. We've been talking about his career and his new book, "Dream Master - a Memoir: From the Stoop to the Stage to the Stars." Raheem, thanks so much for the time and good luck.

JARBO: Thank you so much, Steve.