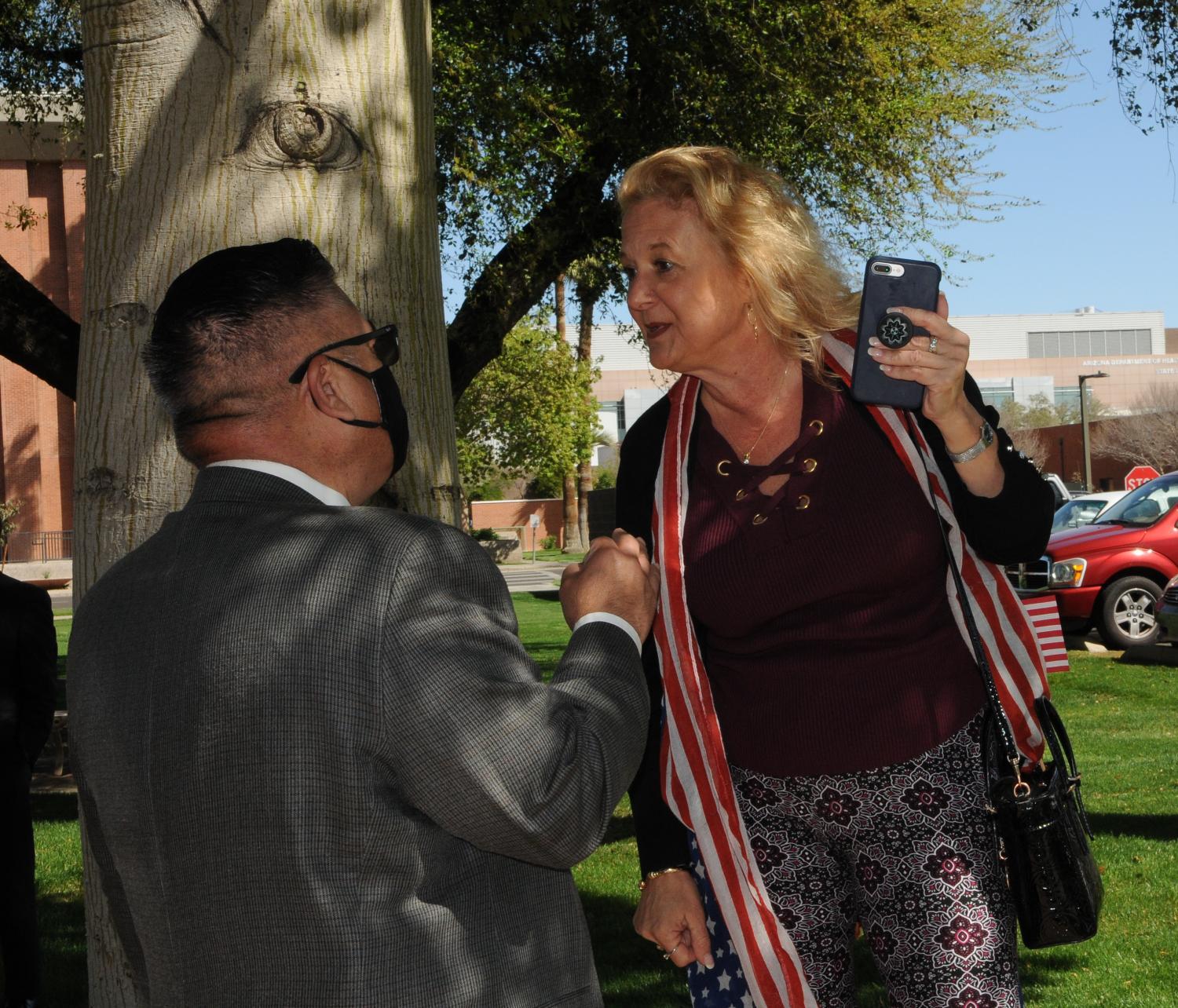 Howard Fischer/Capitol Media Services
Protester Gail G, the only name she would give, argues with a Department of Public Safety officer who was trying to keep her from crashing a Democratic press conference on the Senate ballot audit and shouting out questions.

Arizona Democrats warned that Senate Republicans’ plans to audit the 2020 election would do nothing but fuel conspiracy theories about the vote.

Their point was reinforced when, throughout a press conference held by Democrats on Monday, a handful of flag-carrying protesters shouted conspiracy theories about the election over various speakers.

Democrats like Maricopa County Supervisor Steve Gallardo pointed to the multiple checks on the election system that have occurred since November — a required hand count of ballots to test the accuracy of vote-counting machines, a separate logic and accuracy test, and two additional audits conducted by independent firms.

More than enough has been done to prove the election was legitimate, safe and accurate, Gallardo said. Senate Republicans’ demand for yet another audit, he said, has a sinister motive.

Gallardo’s next words were directed as much at the protesters attempting to shout over his comments as the media covering the event.

“This is about not liking the results of the election,” he said. “You lost the election. Deal with it.” 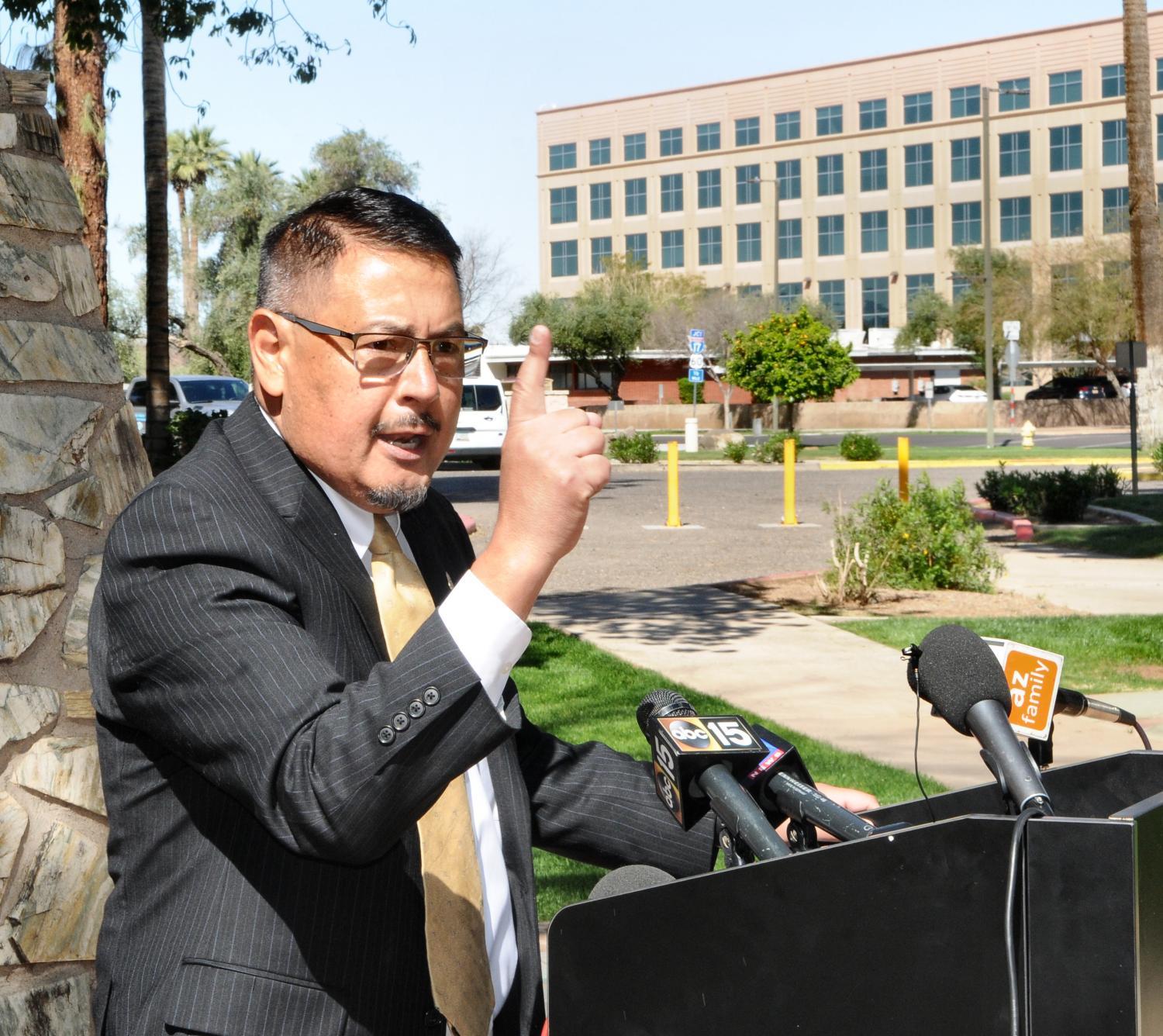 Howard Fischer/Capitol Media Services
Maricopa County Supervisor Steve Gallardo on March 23, 2021, accuses Senate Republicans of pushing the idea of an audit of the 2020 election as an excuse to erect a new series of restrictions on how people can vote.

Protesters accused Democrats of “treason” and demanded they comply with a court-ordered audit. However, a Maricopa County Superior Court judge determined that a Senate GOP subpoena of voting records, including all 2.1 million ballots cast in the general election, was valid. The judge did not order the Democrats, let alone the Senate, to conduct an audit.

It’s been three weeks since the judge’s ruling, and whether an audit happens or not is entirely up to Senate Republicans.

Senate President Karen Fann (R-Prescott) announced Thursday that she has identified a “preferred forensic audit team,” but did not say who that was. Fann also said she’s hoping for a team of volunteers to conduct a full hand recount of the election in Maricopa County.

That particular part of the plan inspired the Democrats to speak out. Gallardo warned the Senate's volunteers could be individuals like those flag-carrying protesters shouting conspiracies at him.

“Now they want to get an army of folks who are going to carry those flags to count your ballots,” he said.

Senate Minority Leader Rebecca Rios (D-Phoenix) said Senate Republicans are partly to blame for beliefs such as those shouted by the protesters.

“This entire charade is only keeping the flame of fraud lit, and we’ve seen how gaslighting voters into thinking the election was stolen and manipulated ends,” Rios said.