Why Groups Like QAnon Hold Their Beliefs Even When Proven False 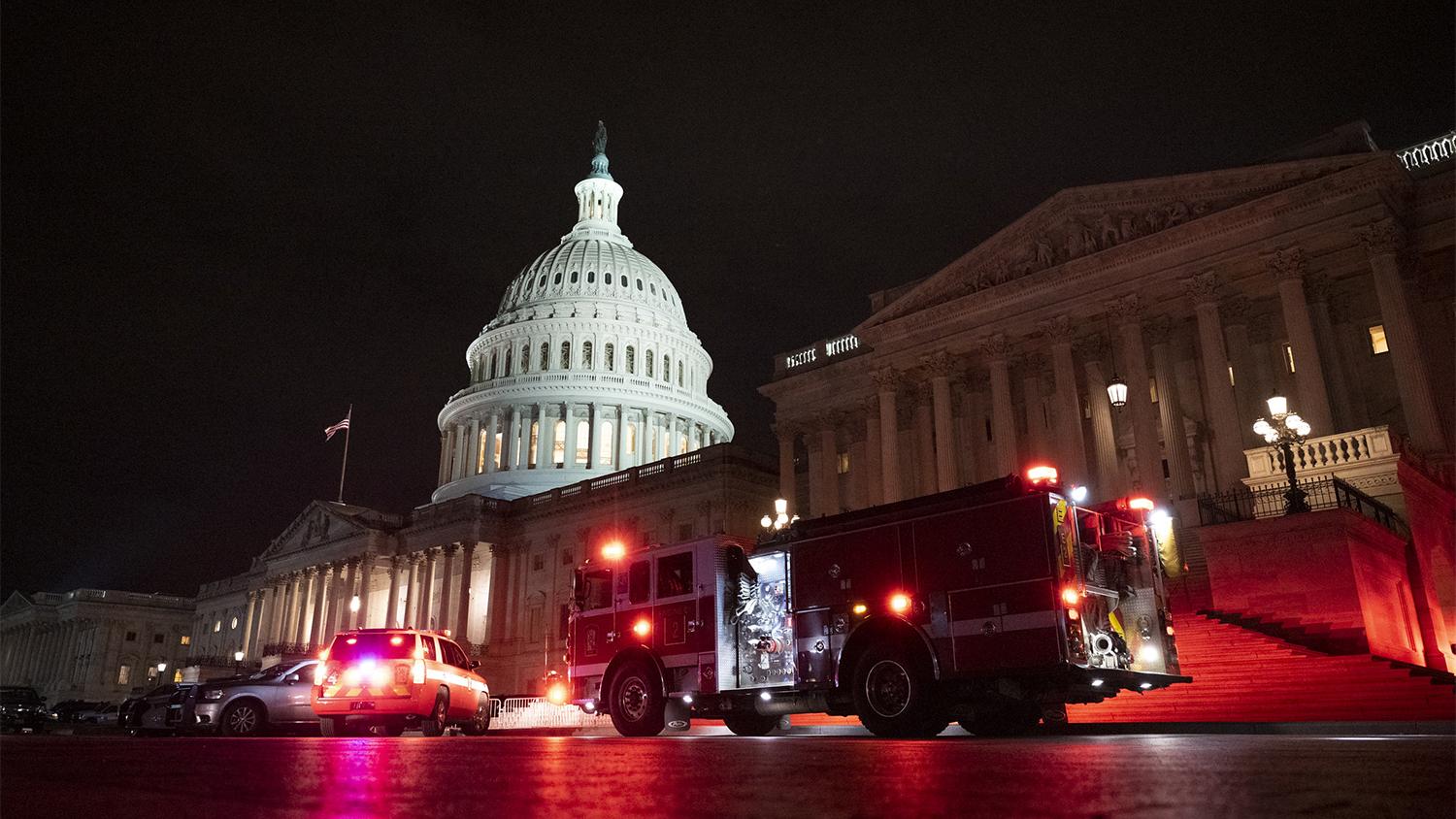 MARK BRODIE: March 4 — last Thursday — saw significant curbing of congressional activity, reportedly because of concerns that QAnon followers and supporters of January's attack on the Capitol would launch another effort on that day. It didn't happen, but because of the persistence of at least some of the group's members, a close watch is being kept on them and the possibility that a different date could again be chosen. Why do groups like QAnon continue to try to move forward, even when their core beliefs have proven to be false? My co-host Steve Goldstein spoke with Richard Amesbury, director of the School of Historical, Philosophical and Religious Studies at ASU. Amesbury began by explaining why, when QAnon believed Donald Trump would remain in power on Jan. 20, the followers were able to justify that the actual date aligned with their beliefs was March 4.

RICHARD AMESBURY: So when Joe Biden ascended the steps of the Capitol on Jan. 20 for his inauguration, evidently there was a significant number of QAnon followers who anticipated the storm, some sort of reckoning in which Democratic politicians and others would be brought to justice for imagined crimes. And when that didn't happen, they were confused and disappointed. Some of them gave up on the theory — QAnon, the conspiracy theory that had predicted this event on Jan. 20. But others stuck with it and, and forecast a new date of March 4. And apparently March 4 was selected because it was the date in the past when presidents were inaugurated prior to the 20th Amendment. So prior to 1933.

STEVE GOLDSTEIN: Is there some sort of collectiveness or something in common that what we're labeling conspiracy theories, at least in this case, or movements that, that don't seem to be grounded in reality or truth? Is there something they have in common, the ones that actually keep going for a while?

AMESBURY: So as a philosopher of religion who is interested in the persistence of religious movements and their development over time, I'm interested in what the philosopher Alasdair MacIntyre calls "epistemological crises." So epistemology is that branch of philosophy that's concerned with knowledge. It's concerned with what we know, how we know it, how we know what we know. And an epistemological crisis is a crisis in our understanding of the world, a crisis that affects our knowledge of the world. And it comes about when we encounter events in the world or evidence that isn't consistent with the story that we use to understand the world. And that can be very disorienting. It could throw our lives into confusion. I think that the important point to make here is that conspiracy theories often encounter epistemological crises when something happens that isn't what was predicted. But these crises aren't unique to conspiracy theories — they're a fact of life. All of us experience moments in life when we're disappointed or when we're in love and that experience turns sour or when we expect to be promoted and are passed over. These are forms of an epistemological crisis — events that don't confirm our view of the world. And the question is, how do you move on in the face of an epistemological crisis? 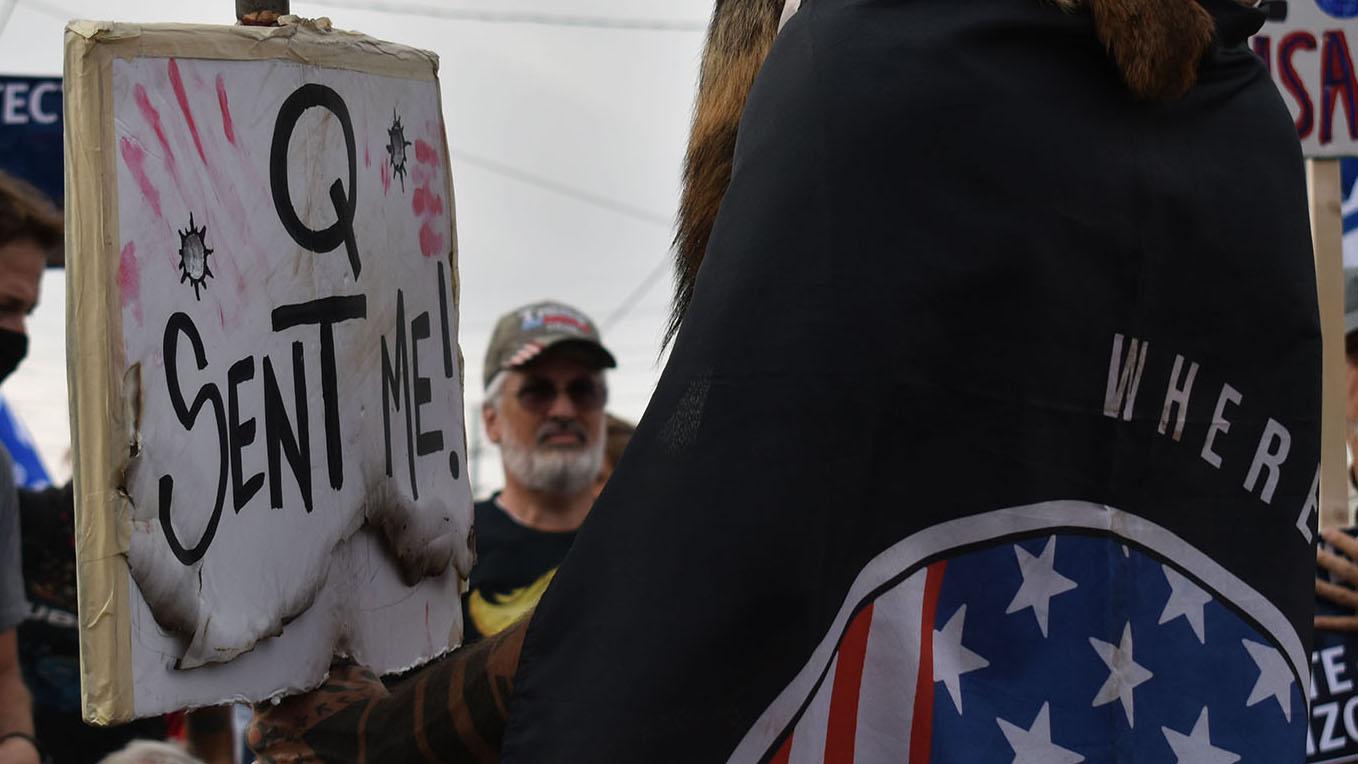 Hope O’Brien/Cronkite News
A protestor holds a “Q Sent Me” sign outside the Maricopa County Tabulation and Election Center in downtown Phoenix in November 2020.

GOLDSTEIN: Certainly we've all experienced that when you say relationships, whether quite personal, sometimes even professionally. But I wonder when it comes to a group, let's say, of religious followers, or in this case, the QAnon situation, how different is it, though, when there may still be, I don't know, hundreds of other people or thousands of other people to sort of commiserate with as opposed to when there is some sort of crisis in a, a one-on-one or a family relationship, which is a smaller group? Is there something that, when there are more people to convince each other that, "Let's have a new truth?"

AMESBURY: Yeah, I think that that's right. That when you're in a group, part of the desire is to maintain that sense of community in the face of opposition from the world. And so there's pressure from within the group to go back to the sources on which that group draws for guidance and to reinterpret them in such a way as to now make sense of what had previously seemed unexpected. And you see this in the case of religious movements. You see this in the case of conspiracy theories. But you really see this in all walks of life, that typically the most economical way to deal with an epistemological crisis isn't to entirely abandon your view of the world, but to modify it to make sense of that new reality.

GOLDSTEIN: And take us back in time. Well, nearly 200 years, 180 years or so, with the Millerites. Tell us about what happened there and is there, not in terms of their viewpoints, but is there a parallel to be had with what's going on currently with these Trump followers, the QAnon folks?

AMESBURY: Yeah, I think there is, not in terms of the content of their beliefs, but in terms of this way of thinking about how to address or navigate an epistemological crisis. So the Millerites were a group back in the 1840s who were followers of a Baptist preacher named William Miller here in the United States. And Miller was interested in the second coming of Christ and used the Bible and some kind of complicated mathematical calculations to predict that, that Christ would soon. And he and his followers made a number of different predictions about when that would be, but none of those predictions came to fruition, and many of his followers were left then to make sense of this disappointment. Some gave up on their beliefs, but a great many went back to the Bible, back to the, the, the numerology, and rethought the significance of these prophecies in ways that made them less susceptible to disconfirmation.

GOLDSTEIN: Is there a feeling that people who stick around, dig their heels in even deeper and, maybe in part, because they feel like this is something they devoted so much time and energy to that there has to be some sort of conclusion that makes sense to them?

AMESBURY: Right. So in economic terms, we might think of these as sunk costs. So much has been invested in a particular identity, in a particular community that it would be foolish to give that up in the face of some turbulence. What's interesting is that while this may look from the outside like a sort of irrationality, in fact, there's something quite rational about this. We do this all the time, including in science, which is to amend theories, sometimes in ad hoc ways, rather than abandoning them wholesale. Make small modifications to accommodate the world, rather than reducing our whole system of thinking to rubble and starting over.

GOLDSTEIN: Richard Amesbury is director of the School of Historical, Philosophical and Religious Studies at ASU.