Alzheimer's Association Report Reveals COVID-19 Impact On Those With Alzheimer's Disease, Other Dementias

MARK BRODIE: The Alzheimer's Association released its annual Alzheimer's Disease Facts and Figures report yesterday, but this year's report is very different from previous years because it looked at the impact of the coronavirus pandemic on people living with Alzheimer's and other dementias. Joining me to talk more about this report is KJZZ's Kathy Ritchie. Good morning, Kathy.

BRODIE: So Arizona was, of course, hit hard by the pandemic. But according to this new report, it really took a toll on those living with Alzheimer's disease and other forms of dementia. And Arizona's has the fastest growth rate for the disease in the country. So how bad was it?

RITCHIE: You know, I've seen a lot of these reports over the years, Mark, and the information contained in them rarely surprises me. But this year was especially devastating. COVID-19 just gutted this particular population. I talked to Kinsey McManus from the Alzheimer's Association's Desert Southwest chapter about it.

KINSEY MCMANUS: There were at least 42,000 more deaths from Alzheimer's and other dementias in 2020 compared to the averages over the previous five years, which nationally is a 16% increase. But in Arizona, we continue to share a large part of the burden. We saw over a 30% increase in dementia deaths during COVID-19.

BRODIE: Wow, that's a big jump. Did she talk about why? Were these people living in long-term care settings or are there other reasons for that?

RITCHIE: Yeah, you know, I think more research needs to be done on the whys. But, yes, long-term care facilities and other congregate settings were deadly for older adults once [COVID-19] got in, because, as you know, it spreads like wildfire. You know, around one in five nursing home residents who tested positive for COVID-19 died from it, according to the Centers for Medicare and Medicaid. Isolation is another factor. You know, lockdowns at long-term care facilities, which are still in effect in many parts of the country, were just awful for residents. Families often provided a lot of extra unpaid care, and facilities were and still are short staffed. And if you have, you know, some type of dementia, you might not understand why your loved one's no longer coming in to see you. So I think we are, we were really seeing some folks just losing the will to live.

BRODIE: So let's shift gears a moment to the special report that was included in this year's facts and figures report. It looked at race and ethnicity, and there were some significant disparities. Can you tell us a little bit about that?

RITCHIE: Yeah, yeah. I mean, it was, it was really surprising, you know. I mean, I guess it shouldn't have been surprising, but we know that African Americans and Latinos have higher rates of the disease compared to white Americans. And what this report found, according to McManus, is that discrimination based on race, color and ethnicity is absolutely a barrier to Alzheimer's and dementia care.

BRODIE: So, so we're talking about people not getting the health care services they need when dealing with a diagnosis of this magnitude?

MCMANUS: One of the things that jumped out to me was half of Black Americans report that they've experienced health care discrimination. More than two in five Native Americans, one-third of Asian Americans and one-third of Latino Americans also report having experienced discrimination. Our communities of color are reporting that providers or staff are not listening to what they're saying because of their race, color or ethnicity. So there isn't that attention to the reports of symptoms, changes in health, and that's critical to getting a diagnosis for the disease.

BRODIE: So, Kathy, did you talk about possible solutions to these barriers?

RITCHIE: Yeah, we talked a bit about that, you know, what they're doing at the local level, nationally. She also talked about preparing the workforce to care for a racially and ethnically diverse population of older adults, you know. Cultural competency training, making sure patient materials are translated into multiple language. You know, and speaking of language, Mark, even within a particular community, take the Latino community — very diverse. And as you know, Latinos are not a monolith.

MCMANUS: Many of our Arizona Spanish speakers may not align with Spanish speakers in like New York City or Chicago because of where our Spanish speakers tend to come from a really different. So it is, again, thinking about not just can you translate the language, but is it in a relevant context of the community we're serving?

BRODIE: All right. That is KJZZ's Kathy Ritchie. Kathy, thank you. 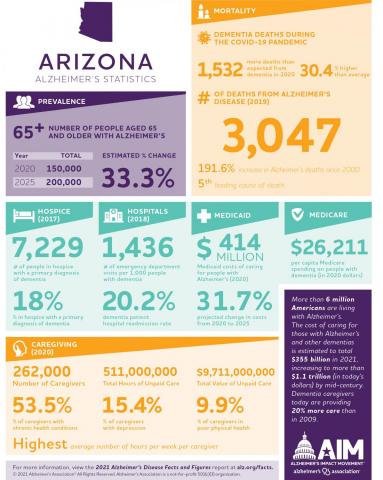