Arizona Legislative Hearings Have Gone Digital, But Some Senate Meetings Were Kept Behind Closed Doors

For at least two weeks in February, two pit stops in the legislative process at the Arizona Capitol were conducted entirely behind closed doors.

The media and general public were barred from meetings of the Senate Rules Committee and caucus, where Republicans and Democrats huddle amongst themselves to discuss bills.

→ Zoom Gives Arizonans A Voice At The Capitol, But Requesting To Speak Isn't So Simple

Republican leaders, who are responsible for setting the rules for the chamber, blamed the coronavirus pandemic, but also reporters who regularly cover the Arizona Legislature. They cited the need for social distancing in rooms susceptible to overcrowding, and what Senate President Karen Fann described as hypocritical criticism of the Senate’s COVID-19 policies.

Senate Democrats, as well some lobbyists who rely on access at the Capitol to conduct their work and keep tabs on lawmakers, aren’t buying it. Sandy Bahr, director of the Grand Canyon Chapter of the Sierra Club, said there are ways the Senate could accommodate access for the public the same as they’ve made virtual accommodations for every other committee hearing this legislative session.

“You could make it work, if you wanted to,” Bahr said. “But you would have to want to. And I think it’s pretty clear that they don’t.” 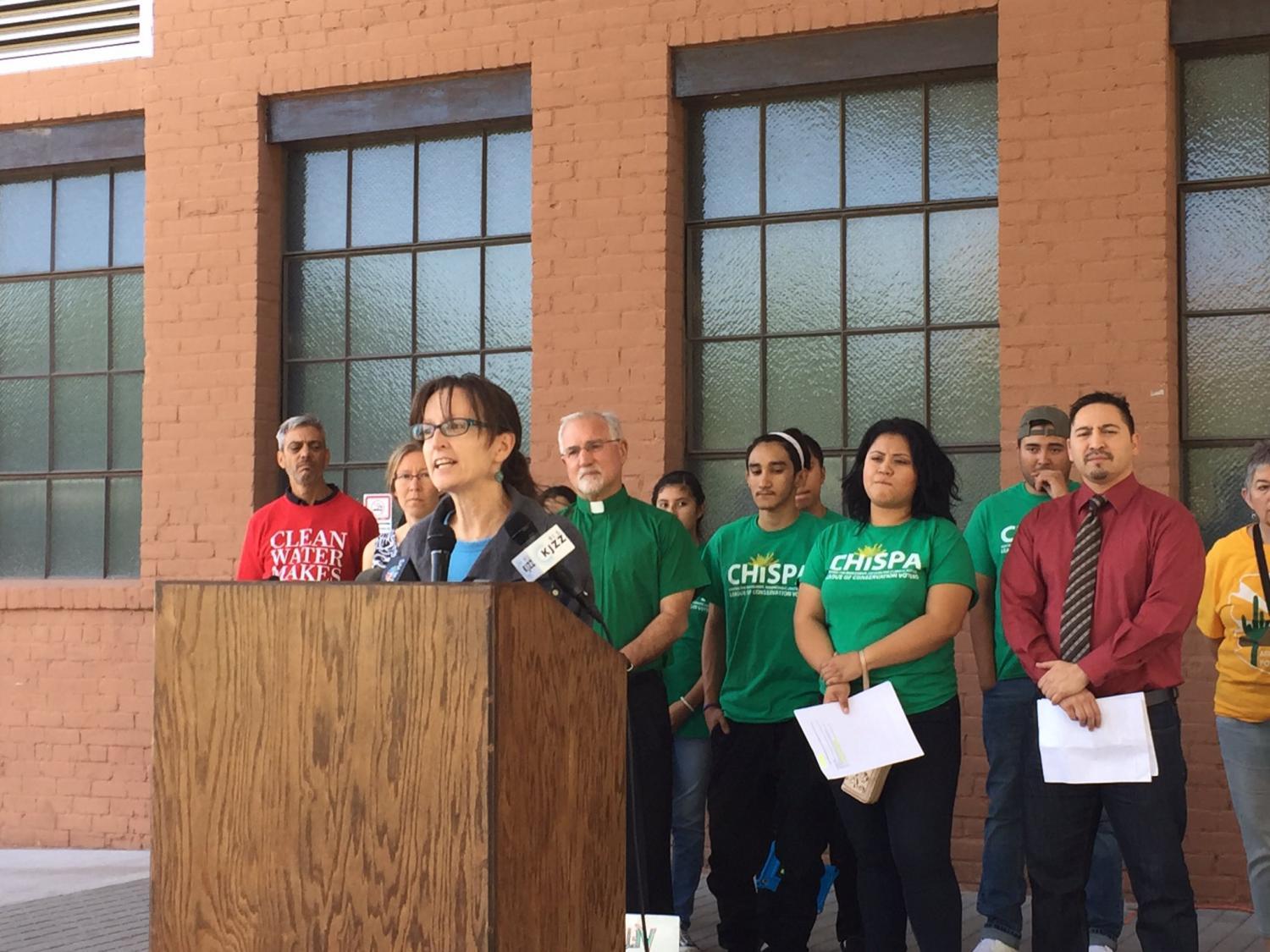 Will Stone/KJZZ
The Sierra Club's Sandy Bahr speaking at press conference with other environmental advocates in 2017.

The Rules Committee serves as a check on some of the senators’ most controversial desires. It’s when the Senate’s rules attorney, Chris Kleminich, advises lawmakers about a bill’s interaction with state and federal law — if, for example, it’s in conflict with federal statutes, and therefore unconstitutional.

The Arizona Capitol Times first reported the Rules Committee was closed to the public and media on Feb.  1. Over the course of two weeks, the committee met three times in secret. It's traditionally held in one of the few rooms in the Senate that isn’t equipped for broadcasting hearings online. It took pushback from Capitol reporters, as well as Democratic leadership, to convince Fann, a Prescott Republican, to adapt to the pandemic and provide virtual access.

“We are literally reviewing every single bill that goes through this chamber and determining whether or not it’s constitutional,” said Minority Leader Rebecca Rios, one of three Democrats who serve on the committee. “That to me is a higher bar. That to me is even more important, and to shut out the public, there really is no justification for that.”

Rios praised Fann for moving the Rules Committee to another hearing room equipped with cameras and microphones to accommodate a live stream of the meeting, effective Feb. 15.

Coincidentally, the first hearing broadcast online included analysis from the Senate’s attorney, who advised lawmakers that SB 1328 was unconstitutional.

The bill, dubbed the Second Amendment Firearm Freedom Act by its sponsor, Republican Sen. David Gowan, attempts to let Arizona decide for itself whether federal rules or regulations violate the Second Amendment and declare those orders unenforceable in the state. Any government entity who sought to enforce those “unenforceable” federal orders could be found guilty of a misdemeanor, and eventually a felony.

“There’s a lot of issues raised by this bill, so I could go on for awhile,” Kleminich, the rules attorney, told the committee on Feb. 15.

“The structure of the bill as a whole, I think, is in violation of the supremacy clause,” he said. That clause, part of the U.S. Constitution, declares that federal laws take precedence over laws of the states. Nonetheless, the committee’s four Republicans voted to advance the bill over the objections of the committee’s three Democrats, including Rios.

Republicans ignoring the advice of their own attorney is not an uncommon occurrence. Bahr said there are multiple bills she’s tracking for the Sierra Club that had similar concerns raised by the rules attorney, only for Republican senators to rubber-stamp the bill anyway.

“I’m glad they’re doing that,” Bahr said of Fann’s decision to move the Rules Committee. “And if they’ve figured out that it was important to have the Rules meeting livestreamed and available, then they should also figure that out about the caucuses because it’s equally important.”

Unlike the Rules Committee adjustment, caucus meetings have remained secretive for over a month now.

Bahr described those meetings as the last stop before bills are subject to up or down votes by the full Senate. Typically, Senate research staff will provide Democrats and Republicans, in their separate caucuses, with a summary or explanation of a bill. Bahr said it’s useful for senators who might not be privy to the details of a particular bill, especially lawmakers who don’t serve on a committee the bill must have been approved by in order to reach this stage in the legislative process.

“I think it’s important that they be able to have a discussion, amongst themselves to really, you know, learn from each other,” Bahr said.

That discussion can be lively and frank, since lawmakers are meeting with their own kind — Republicans amongst Republicans, isolated from their Democratic colleagues, and vice versa.

Particularly in the GOP caucus, those frank discussions can be a valuable source of information for the public. In a chamber that Republicans control by a one-vote majority, some of the most consequential and controversial bills pass with exclusively Republican support. Caucus is often the first sign of trouble for Republican-backed bills — that is, if one or more Republicans express reservations about voting for them.

“All you need is one member to make a comment that you can identify that this person has questions, they might be opposed,” Rios said. Democrats, who would traditionally send “spies” to watch the Republicans’ caucus — Republicans did the same — don’t have that access anymore, at a time when the GOP’s margin for error is slimmer than it’s been in years.

“That would be the advantage right now, identifying the cracks in that caucus with regard to certain bills, and then aligning ourselves with that person, bringing them over, and trying to exploit that,” Rios said. “It’s politics.”

Fann said she decided to move the Rules Committee to a digital-capable room in response to concerns from reporters who regularly cover the Capitol, though she suggested the media rarely shows up for the hearing anyway. But she’s keeping caucus behind closed doors, in the same rooms Republicans and Democrats have always met in — the rooms that aren’t equipped for digital broadcasts. Fann said it’s simply a matter of logistics because other hearing rooms “are not set up to have adequate mics or sounds,” enough for all 16 Republican senators.

“That’s why we have a maximum of five people, five members that are allowed on the dais because of COVID,” Fann said, referring to a policy she set limiting the number of senators allowed in a hearing room. Other senators use Zoom to participate.

But that COVID-19-conscious rule doesn’t apply to the caucus, when all Republicans traditionally sit around a large conference table in a room filled with Senate researchers and Republican staff. Fann said one senator, Republican Kelly Townsend of Mesa, regularly uses Zoom to participate in the GOP caucus, “but for the most part, pretty much all our members are there.”

Rios said Democrats tried to offer the public access to their own caucus on Zoom, but were stymied by Fann.

“[Fann] indicated that she did not want her Republican caucus broadcast via Zoom, and essentially, that she wanted us to shut it down,” Rios said. “Being the president, she sets the rules in this place.”

The Senate’s policy is in stark contrast with the House, which for years has offered a livestream of its own weekly caucus meetings. Neither Fann nor Rios could explain why the Senate has never done the same. And Fann said she has no desire to change a long-standing precedent by airing the Senate’s caucuses online.

“We have nothing to hide. We’re fine with the public seeing that,” Rios said. “The president was not.”

Fann told an Arizona Capitol Times reporter in early February her decision to shutter caucus was made “because of COVID, particularly since the media has been critical of Republicans not taking it serious enough.” Fann said the comment was made in jest, but she also criticized reporters for complaints about their access being restricted to accommodate social distancing. For example, Fann barred reporters from their usual seats on the Senate floor and moved the media up to the third-floor gallery. Fann said a reporter complained that means journalists won’t have access to the floor, “‘so that we can put a mic in a member’s face and get comments,’” she said. “And I said, that’s exactly part of the reason.”

“You guys are the ones who are being so critical of the Republicans not taking COVID serious enough,” Fann said. “And now you’re mad because I won’t let you on the floor to get in their face to ask them questions.”