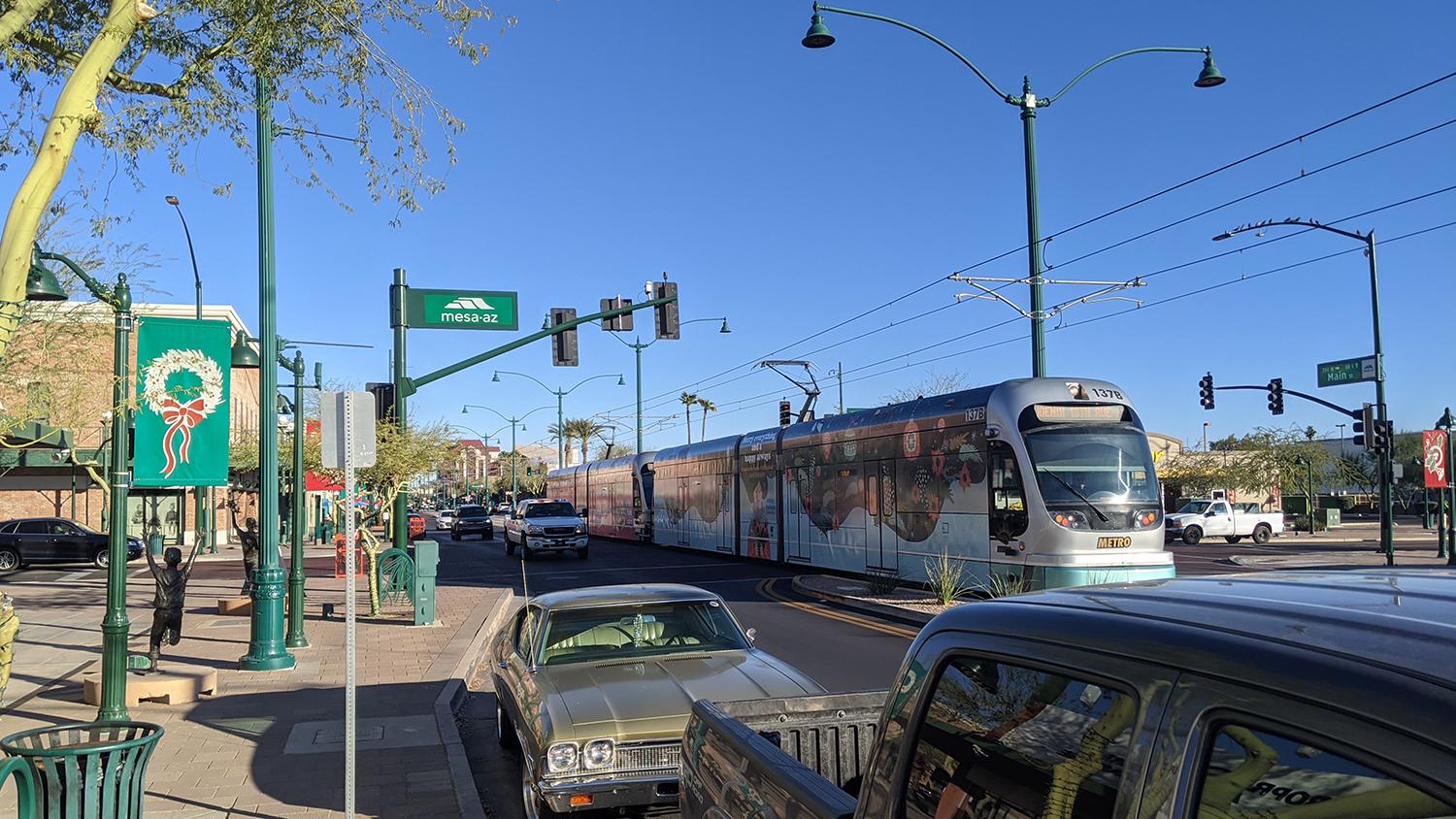 STEVE GOLDSTEIN: Mesa has Arizona's third-largest population — far behind Phoenix, but inching ever closer to Tucson. And as Mesa has grown, the perception of the city has changed. From being an early adopter of light rail to having a cultural hub like the Mesa Arts Center, the city has undergone major shifts. And it may be on the verge of more, especially as it relates to downtown. Chris Malloy wrote a piece for Phoenix New Times called, "Downtown Mesa Is on the Cusp of a Second Golden Age," and he's with me to talk about it. Chris, what has residents and others optimistic about this next stage for downtown Mesa?

CHRIS MALLOY: There's a number of factors. I think the light rail is definitely the first major catalyst that we're seeing and, you know, that's been extended to Mesa for a few years now. But we've seen some more recent catalysts as well, and one being the construction of that new ASU campus, which began in early 2020. Businesses and potential businesses have gotten really excited about that and the potential student traffic that that could bring to downtown because that campus is right downtown. And then during the pandemic, you know, as the restaurant scene has struggled and small businesses have struggled across the Valley and across the country, downtown Mesa has actually been booming. The small business scene there, there's been a bunch of openings, and that has been pretty surprising to see. And it speaks to growth trajectory, I think.

GOLDSTEIN: Do you think people in the Valley or the state are aware of just how huge Mesa is in terms of population or even land mass?

MALLOY: No. I mean, that's something that surprised me when I looked into it. Mesa is, I mean, bigger than Miami in terms of population, bigger than Minneapolis, not that much smaller than Tucson. I mean, it's one of the 50 most populous cities in the country, which is really impressive. And then it's incredibly long, too. I mean, from east to west, you know, you're driving for a long time before you get through Mesa.

GOLDSTEIN: One of the real concerns is that in the Valley, generally, you know, this has been a place that at least compared to California, very affordable, very affordable, and it still is compared to California. But that's changed a bit. Is there a feel that Mesa is going to have not only some really great housing or options in terms of whether it's apartments, condos, etc., but also are there going to be affordable options? Are we going to see a real diverse population in that area?

MALLOY: Well, this is something that, that people are slightly concerned about. I mean, when a downtown kind of booms, prices tend to go up, and businesses are excited. But there is some fear about rents rising because one of the things that has attracted businesses in particular to downtown Mesa are the cheap rents relative to, you know, Phoenix, Scottsdale or even Gilbert. And so, with the added attention, with the new housing going up, with, with the business boom that we're seeing to start there, rents are going to rise. And that's going to also apply to residential rents as well. Right now, though, there isn't a heavy concentration of people living in downtown Mesa, and the city is building a lot of new housing units to address that. The city wants more people living downtown so that they can support the businesses downtown and just build a more vibrant town center. And with those new units, of course, I think people are expecting rents to rise. And the city is conscious of this and has studied what has happened in downtown Phoenix and elsewhere. Looking at downtowns that have blown up in the past years and decades. And they're mindful that rents are going to increase and things are going to change. And they're trying to mitigate that in whatever ways they can. But that's just something that they know is going to happen. And the extent to which that happens can't really be predicted at this point. But it's just something that they're mindful of and they say they're going to try to curb as it happens. But inevitably, with higher rents, the neighborhood is going to change to some extent.

GOLDSTEIN: Chris, ASU, of course, could play a factor in this; ASU has played a big factor in terms of downtown Phoenix and how it's been transformed in certain ways. One of many phrases that struck me in your piece was "innovation district." What is that supposed to look like for folks who, who are optimistic and bullish about this? 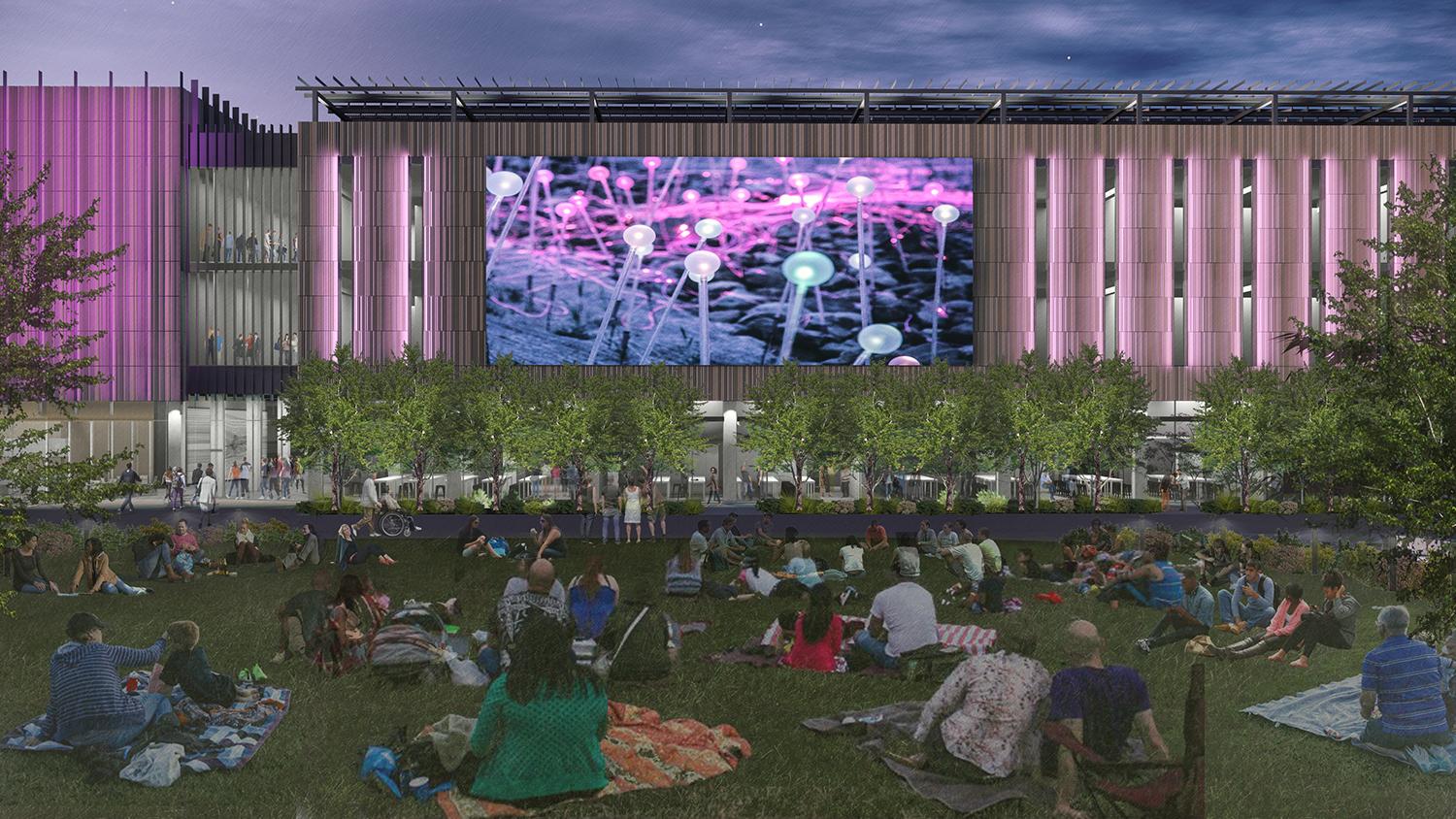 MALLOY: Yeah, innovation district is something that Jeff McVay, who is the transformation manager of downtown Mesa, likes to talk about. And so what the city is trying to do is turn Mesa into this hub of innovation. So not just a vibrant downtown, but a place where novel changes are happening and thought leadership is happening, and the kind of focal point of this is going to be ASU. And this isn't just like a tiny little satellite campus they have there. It's a huge three-story building that's going to have room for a ton of different students and a bunch of different departments, including that new Sidney Poitier Film School, which I know the town and ASU both have very high hopes for. I guess that this would also kind of be happening in spaces like the new arts loft that recently opened in Mesa, where you have housing for 50 artists and their families and also studio display space in that same building. Mesa is looking into innovative projects like that, where people are going to be creating and working on ideas. I know there's also — I don't know if it is going to city council or it has been approved, but there is another building that's going to be a hybrid between a coworking space and residences. So there are a lot of kind of interesting, forward-looking projects being considered in Mesa or being built that center innovation.

GOLDSTEIN: You know, Mesa has, even as there have been changes, perception still is it's a pretty traditional city. But the things you talked about, the things you wrote about, clearly that's changing. But is there any sort of push and pull between longtime residents or people who want to see change? There's always a little tension when that happens. Is that happening in Mesa as well?

MALLOY: Based on the people that I spoke with, I was not seeing that to the extent that I expected. I think people on Main Street, downtown are excited that these changes are beginning, and they're excited because the city has worked really closely with businesses and has been pretty transparent about its plans. And people feel like they're all kind of in it together, at least at this point. I mean, we haven't seen those rents rise yet, and we haven't seen an insane acceleration of change — you know, talk to me in five years and this might be different. But right now there isn't a whole lot of tension, although people are kind of in the back of their minds expecting it. All in all, people are excited about the changes coming to downtown Mesa.

GOLDSTEIN: That is Chris Malloy, freelance writer. Wrote a great piece for Phoenix New Times, "Downtown Mesa Is on the Cusp of a Second Golden Age." Chris, thanks as always for the time. Be well.

MALLOY: Steve, thanks so much.