These Images Define The Pandemic For Tucson Photojournalist Mamta Popat 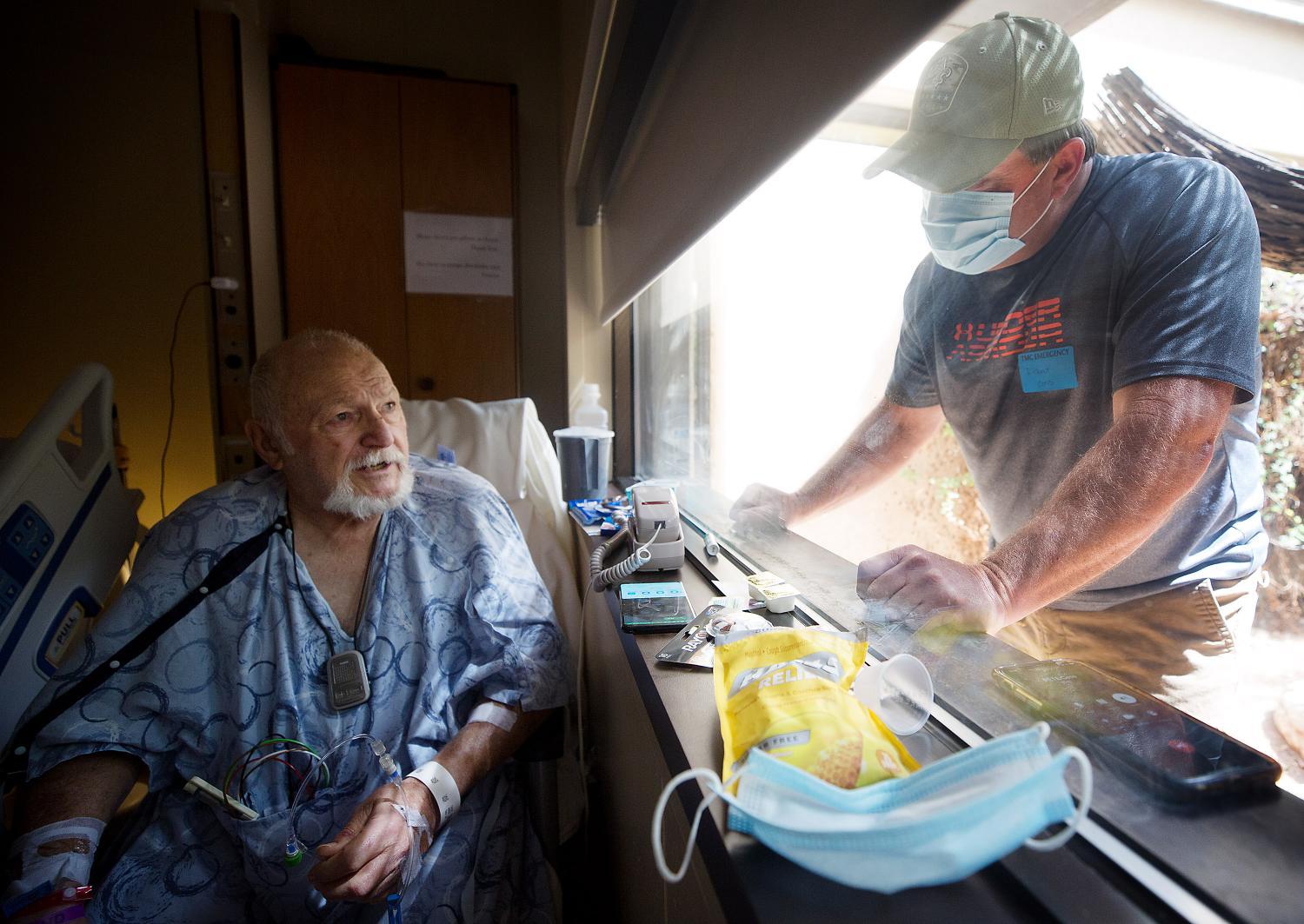 Mamta Popat/Arizona Daily Star
Homer Cass, left, talks to his son, Richard, through a window at Tucson Medical Center on April 27, 2020. The hospital is making adjustments during the coronavirus disease (COVID-19) pandemic to now allow visitors.

STEVE GOLDSTEIN: The emergence of COVID-19 vaccines and the increasing number of people who've been able to receive both doses has eased some of the worries of being around other people and in relatively close quarters. But those worries, of course, still exist, and over the course of the last year have changed how many people approach their jobs. There are the more obvious occupations that have been impacted, like health care specialists and people who work in retail, especially grocery stores. Then there's someone like Mamta Popat. She's a photojournalist with the Arizona Daily Star in Tucson. Some of her assignments have been very different during the pandemic, and she's also been less eager in certain situations to gather images the way she had before. And she's with me to talk about her experiences. Mamta, can you compare what this last year's been like to what you'd experienced before as a photojournalist?

MAMTA POPAT: So the essence of the job hasn't actually changed that much. I'm still going out on a daily basis, taking photos covering Tucson and the outer community. What has changed is a lot of the major events that we usually cover have been canceled for obvious reasons, such as the Tucson Festival of Books, El Tour de Tucson, the All Souls Procession. With, with those major events canceled, we're still going out and covering the community in the umbrella of coronavirus times.

GOLDSTEIN: Has there been a time over the past year where you were, in the past, let's say you would have been a little bit more eager to do your job? Are there certain situations that popped up where you just did not feel safe? And were you able to express that to the powers that be?

POPAT: Yeah, for the most part, I have to say, living in Tucson, a majority of people who I have met take this fairly seriously. So in a lot of my assignments, people are wearing masks. They're wearing them properly, I should say also. And then over the past year, I think there's only been maybe a handful of assignments in which I did not feel comfortable staying a long time. And I just shorten my stay. For example, I had to go to the Tucson airport because they had opened up a testing station there. And normally when we're at the airport, we like to get some other photos of people traveling, walking with their suitcases just for some file art. And my editor had asked me to get that, and I told them I just don't feel comfortable in this time period staying at the airport longer than I have to. This was right before Thanksgiving. So there are a lot of people in the airport. And, you know, he was very understanding. So I'm grateful that my editors are open to hearing our concerns and working with us.

GOLDSTEIN: Has the response to you and the work you do changed at all because of the pandemic? Have people been either more or less inclined to be photographed and even, you know, be part of the work you're doing?

POPAT: Yeah, I haven't run too much of an issue of people not wanting to be photographed. But that being said, when I approach them, if I'm going into a business or going into someone's home, beforehand I'll try and tell them that I take this very seriously. I'm not going out to restaurants and not going to the movies. And I've started wearing two masks on all my indoor assignments, so I just try and make it as comfortable for them as possible. And I always give them the opportunity to tell me how much time they feel comfortable me being in their home. I really let the subject sort of take the lead. There are some times when I want to take a portrait of someone and I'll ask them, "Do you feel comfortable taking your mask off?" And most people have said yes, some people have said no. And that's fine. I'm not pushing the issue during this time period.

GOLDSTEIN: Has it started any, any good conversations? Has there been anything that has maybe bonded more than in the past with other subjects?

POPAT: Yeah, I will say people are a lot more chatty.

POPAT: Because sometimes if someone lives alone, you know, I'm coming into their space and they're just so happy to have someone to talk to. So, and, you know, I also live by myself, so I'm happy to chat with them also. And, you know, we just kind of talk about how we're getting through this time period. What's just so amazing is that, I mean, amazing, but what's so interesting is that this really, everybody has an experience during this time period — if, if you're privileged and you have a lot of money to middle class, to lower income, everybody has an experience with this. And so I actually find that really interesting to see how people are handling themselves during this time period. So I enjoy talking to people when I come to their homes.

GOLDSTEIN: Is there one particular photograph or a couple that have stuck out to you that you have taken, things you've documented that even you can look at it objectively and say, "That was an image that maybe will stick with me for a long time because of the person or the situation, but also the way I frame, due to the way I took it?"

POPAT: Yeah, actually, there are, there are two that stick out for me. Before I say that, I just want to say that I think during this time period, a lot of photographers who are working for media outlets are probably trying to find that one image that encapsulates this whole thing. Because if you look back on other major events, there's always one or two images that people can remember seeing from that time period. And so part of what I'm trying to do each day when I go out is will this be an image that I will look back upon and think, "Yeah, this captured it for me"? And right now there are two. There's one they took back in, I believe it was like late March or early April where testing sites, testing sites weren't available just yet. They were limited here. And this one woman, Cheri, was from a nursing home and I guess an employee had contracted COVID or had tested positive. And so the staff, they were bringing the residents through this testing site. And she was just so sweet. Before she came, there had been a couple of people who said no to photographs, and that's fine, a couple people said yes. And I was chatting with her and she said, "Oh, yes, this is just so important. You should definitely take my photo." And I said, "OK, great." And it was a nasal swab testing, her test. And she just had this, like, grimace on her face that it just looks so painful. 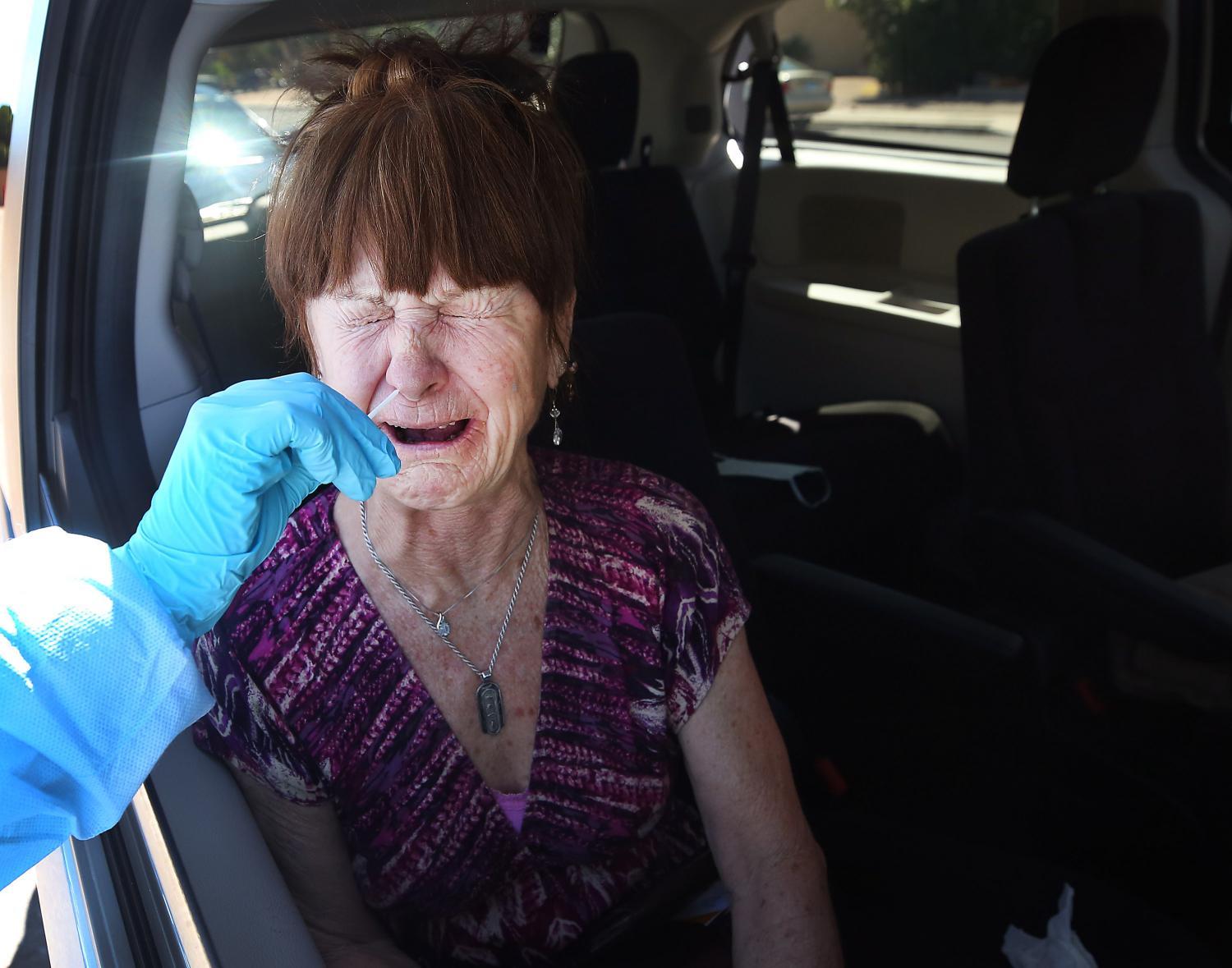 Mamta Popat/Arizona Daily Star
Cheri Carr grimaces as she receives a nasal swab while getting tested for the coronavirus disease (COVID-19) at a drive-thru testing site at Escalera Health & Wellness, 2224 N. Craycroft Rd., on April 17, 2020.

POPAT: And so afterwards, I double checked with her because I wanted to make sure that she was still OK with this photo. And she said, "Oh, yes, honey, this is an important time period, and people need to know this, and you go ahead and use that photo." So I'll always remember Cheri. And another one that I took was at another nursing home. And I think it was probably, I would say probably in August, I think, I took it. And the people there had constructed a hug tunnel in which they took plastic and cut out armholes. And so the first time the residents were able to receive some sort of physical touch from their loved ones. And for me, those two images really capture this time period for me right now. I don't know, we still have many more months of this, and I might capture another image, but those two really stick out in my head. 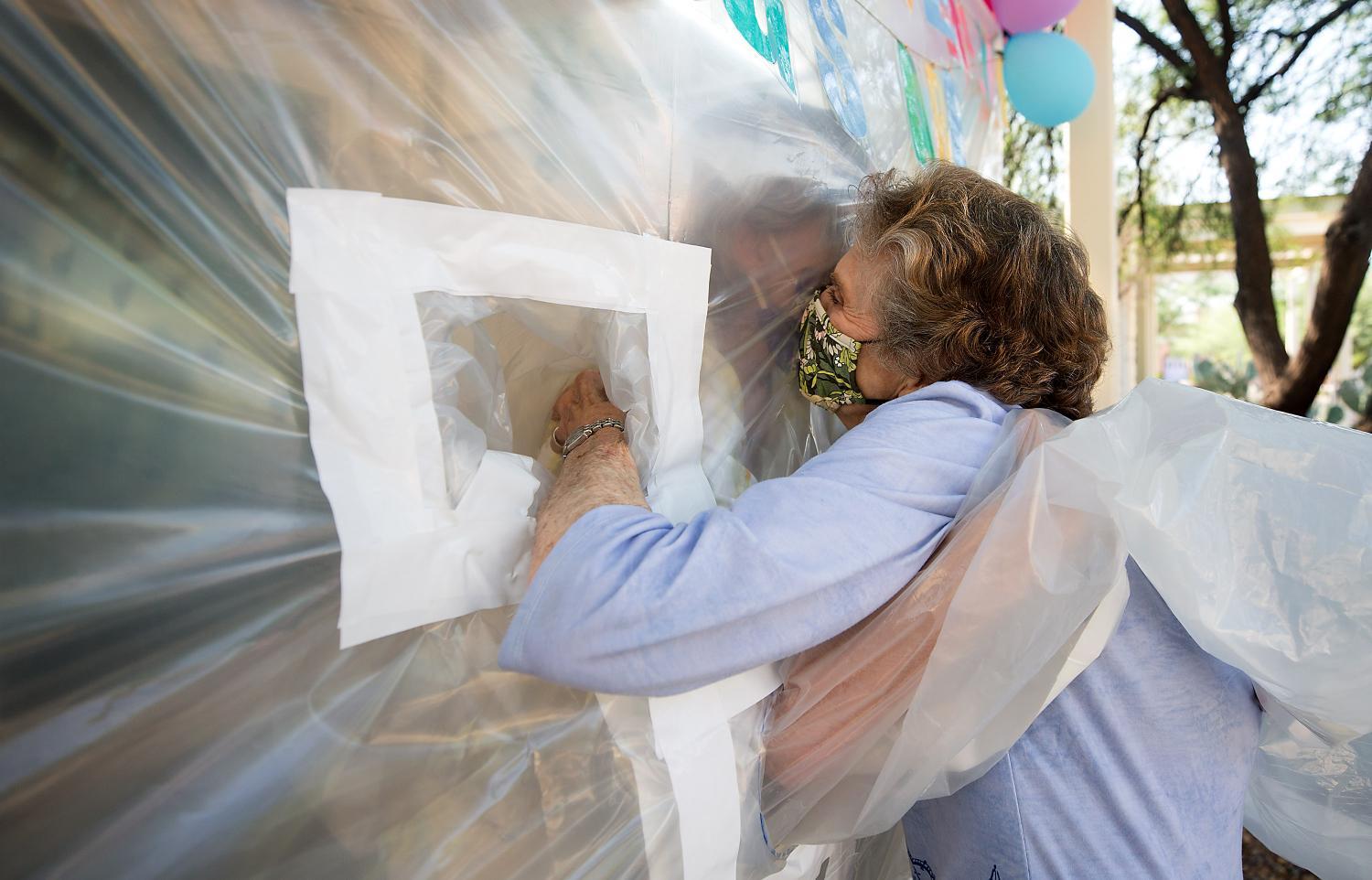 GOLDSTEIN: Mamta Popat is a photojournalist with the Arizona Daily Star.