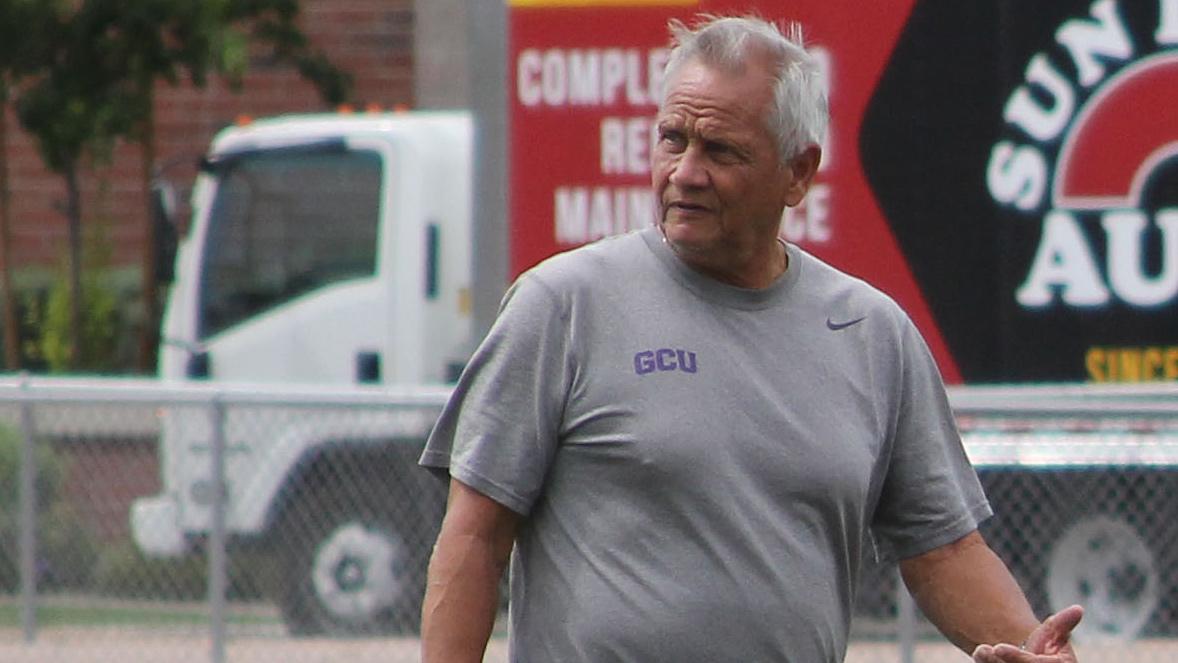 STEVE GOLDSTEIN: Youth soccer is extremely popular in Arizona and across the country, and the game's reach continues to extend its influence. But there's only one Division 1 men's college soccer program in the state. And it may surprise you to find out it's not housed at one of our public universities — it's at Grand Canyon University. The Antelopes' Head Coach Schellas Hyndman was a Hall of Famer before he came to the Valley, having achieved success at Southern Methodist University and in the pro ranks with FC Dallas. And Hyndman is closing out his more than three-decade head coaching career with this, his last season at GCU. And Coach Hyndman is with me for a few minutes. So, Coach, you've been in this business for a very long time, but you've never experienced anything like the pandemic. How has that affected you and your team?

SCHELLAS HYNDMAN: It's really been a challenge. It's been a challenge not only for me as a coach — it's been a challenge for our players, our administrators, our students who, who want to be, you know, on campus, going to classes, the normality, being in the stands. All those things have been compromised for one thing and one thing only, and that is securing health for everyone involved. But it has been challenging. I know personally, I come out to practice hoping that one, somebody on the team is not infected or positive because it could affect me as well as my staff or the players. We've had players who were positive, and the whole program had to shut down. This is such a new situation. The virus is such a new situation that the majority of us have never faced anything like this. If we've ever seen it in a movie or, you know, we don't, we can't comprehend it. And so it's been a real challenge. Don't know what my starting lineup is going to be from week to week, depending on what players might be positive. We are being so cautious that if a player even has a sore throat, we tell him to stay home. It's been a heck of a challenge for sure.

GOLDSTEIN: When you think about the popularity of soccer in the U.S. — this question comes up a lot, I know — are we getting to a point? Have we been to a point? Is this an old news story about whether soccer's popularity will ever reach a certain level?

HYNDMAN: I think there's been a major shift for soccer. You know, when I came to United States, I was one of the few people that played soccer. I was ... a refugee, and I was in Ohio and my cousin brought me into a men's team because there was no soccer in high school, but very few people even knew about soccer. Today when I look at it — and I've been involved in a game of soccer, you know, since I came to the United States, at some level — it has grown tremendously. And it has grown tremendously not only on the male side, but tremendously on the female side. And are we where we want to be? I think we're in a really good place. A lot of people know soccer. You know, back in the day, people would ask, "What kind of a ball is that [guy] kicking?" You know, they didn't know what a soccer ball was. Today, you see a lot of commercials with soccer. You see a lot of kids playing. You see soccer moms. You see people getting into a van with a soccer team, commercials now. You know, there's so many things about soccer. And I think when you look at the high end of soccer, the professional level or the national team, our women's national team is the best anywhere in the world. I think the popularity is at the highest it's ever been, and I still think it will continue to grow.

GOLDSTEIN: When you mention the university system and whatnot, when it comes to continuing, having the game continue to grow in the U.S., how much of that is going to have to come from more homegrown products, universities? What works better for this model?

HYNDMAN: When I was a professional coach at FC Dallas, I talked with the owner, and, you know, I came to a system in the United States where you played one sport every, every quarter, right? You played football or ran cross-country. You played basketball in the spring, you played baseball or you played track. Kids didn't get burned out. With an all-year-round soccer program, there's some great advantages, and those great advantages that you're playing 11 months out of the year. The disadvantage is that you're playing 11 months out of the year, and you don't get a break, and you get burnt out. Or you don't get a chance to play in front of your high school kids because you're playing club soccer or academy soccer demanding 11 months out of your time. The owners made a decision that we're going to invest all this money into the academy teams. Now, you look at FC Dallas and I think they've had a total of maybe 20 players that were homegrown players, and they've sold quite a few of them. You know, they're playing in Europe. So it's it becomes a financial stability where, where they're now able to invest into players' development, into players' games — you know, fly them to Mexico to play games as under-18-year-old, and getting them all the games they need, and then selling them for a value. And if this, if this Bryan Reynolds situation with Roma goes through, that's $9 million — it goes back to the MLS.

HYNDMAN: And I think 80% goes to the club. I don't enough today, but I'd say 80% goes back to the club that invests back into developing professional players. So we're on a pathway of what's being done in the rest of the world.

GOLDSTEIN: I have to ask you one of these big philosophical questions before I let you go. If you were to be world soccer commissioner for a day and you were to say, "OK, I love this game, I've coached in it for three-plus decades," is there one aspect of the game on-field that you would change? And I bring it up because we're seeing things like in, you know, Major League Baseball, we have to make the game shorter. In hockey, you know, we began with a shootout rather than going four overtimes, so that kind of thing. Is there something on the field you think would make the game even better?

HYNDMAN: I'm a traditionalist, so I believe in what's being done throughout the world should be done here. I was also the director of NCAA's men's soccer, and we had a lot of people that had the similar questions. "You know what? I go to a game and the score is 0-0." Or, "I went to the bathroom and somebody scored a goal and it was the only goal scored." You know, and you hear these type of things. But sometimes the beauty of the game is a 1-0 game or 0-0 game where goalkeepers are making brilliant saves. But going to your question in the collegiate game, the one thing I would change is to make collegiate soccer a fall and spring sport, where it's not done just in a fall season in three months. But you had played three months of soccer in the fall, and then your championships would be in the spring. That way your incoming freshmans could get a chance to compete and to even participate, because when you come in as a freshman, it goes so fast that you don't really get a chance to play but minutes because, you know, the season starts up in 10 days.

GOLDSTEIN: That is Schellas Hyndman. He is men's soccer coach at Grand Canyon University, retiring at the end of the season. He's also a Hall of Famer on top of all that. Schellas, thanks so much. Really good to talk with you.