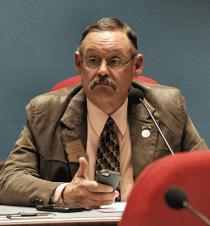 MARK BRODIE: As former President [Donald] Trump was pushing baseless conspiracy theories about the election being stolen in states including Arizona, one of his most loyal supporters here was State Rep. Mark Finchem. Trump's campaign paid a business Finchem owned around $6,000; media outlets have reported the expense was labeled, "recount: legal consulting." Finchem was in D.C. on Jan. 6 as rioters stormed the U.S. Capitol. And the Oro Valley Republican is a member of the far-right, anti-government group, the Oath Keepers — some of whose members are under investigation for their role in the insurrection. Jerod MacDonald-Evoy of the Arizona Mirror has been reporting on Finchem and joins me to talk more about him. And, Jerod, Finchem was first elected to the state House in 2014. Might not be a household name for a lot of folks, but he certainly has gotten more attention recently with his role in the Stop the Steal events, he's been pushing conspiracy theories about the election, stuff like that, right?

JEROD MACDONALD-EVOY: Yeah, Rep. Finchem has become a lot more prominent in the mainstream sort of political realm the past several months because he has been engaging in a lot of the conversations around election fraud. He has been very prominent in the Stop the Steal movement. Him and another person who is, has been one of the key organizers of that movement, Ali Alexander, kind of have partnered up. And Ali Alexander has himself said that there wouldn't be a Stop the Steal movement in Arizona without Mark Finchem. And Finchem has been kind of the key proponent and key mover of that movement here in Arizona. He was the main driver of the, the movement here and held the rally, a lot of the rallies here. And he also held the unofficial hearing that had Rudy Giuliani come down here. Mark Finchem has been part of this, this organization of Stop the Steal that has been moving a lot of this information and has been part of this movement since the beginning. He gained a lot more scrutiny after that when he was at the Jan. 6 riots. And since then, there's been petitions for him to be recalled in his district and expulsion efforts at the House and Senate and a litany of ethics complaints that were eventually dismissed by the Ethics Committee.

BRODIE: Right. Well, in part of that, though, is we don't know exactly what he was doing in D.C., right? Like, he tweeted out some photos of rioters at the Capitol, but he has said publicly that he did not go inside. He was not part of the, the group of people who were staging the insurrection there. What do we know about what he was actually doing there and what his role was?

MACDONALD-EVOY: Correct. Some of what we know is a little bit mixed. Finchem deleted his Twitter account shortly after the events of Jan. 6. And what we do know is from what we have there. I was able to obtain a download of all of his tweets before he deleted his Twitter account. And that kind of gave some insights into that. He tweeted out a photo of the rioters around the time that they were breaching the Capitol with a caption along the lines of saying, you know, "This is what happens when there's been rampant election fraud and Americans are fed up." He has stated that he was unaware that rioters had breached the Capitol at that time. Some of the texts that he has released that he had originally fought — he had fought public records request by the Arizona Republic and Phoenix New Times — with an attorney saying that these, these records could possibly implicate him in a crime. He has released some of those records, although it is a very selective release that only kind of shows what he might want us to see. Those text kind of paint a different view of what he's originally said as those texts show that he was somewhat aware because other people that were with him, mainly Ali Alexander and another organizer, had texted him saying, "People are sieging the Capitol right now. It might not be safe." And that was earlier in the day than when he said he had, he had been aware that things were going south at the Capitol. So there is some confusion on how aware he was of what was going on and how close he was — he says he was within 500 yards of it, and the picture he has is more or less within that realm.

BRODIE: Now, you've also reported that the hearing that you referenced in which Rudy Giuliani and others came to town, they held it at a downtown hotel, he is now trying to raise money to pay that off?

MACDONALD-EVOY: Correct. Finchem apparently paid for most of that hearing out of pocket, according to the reporting I did. He is looking to raise around $15,500 for expenses incurred during that hearing. He has been going and asking followers on the encrypted messaging app Telegram, as well as on the social media platform Gab asking followers to donate for debts incurred. The money would be going to a PAC called Make, "Make Arizona Safe Again PAC." When I reached out to the treasurer of the PAC, they said that the money would be going to the PAC but then would be going back to Finchem to reimburse him as an in-kind donation for the expenses that he personally incurred for this. And those expenses were for, you know, reserving the hotel and for travel expenses.

BRODIE: Now, you mentioned the ethics complaints; there were 80-some odd of them that were dismissed. There is, of course, an effort to expel him from the House, which doesn't seem to have a lot of traction. There's a recall effort in his district. Does it seem as though he's going anywhere between now and his next election?

MACDONALD-EVOY: Well, as you said, the expulsion effort probably is not going to go anywhere. The majority of the House and Senate is the Republican Party's, and that expulsion resolution is not moving anywhere and very likely will not move anywhere. As far as the recall, that seems to be a slow moving effort. The recall people are looking for volunteers and are trying to hire staff. It is in an area that has voted very much for Finchem again and again and in higher numbers. It is an area that is, is mostly Republican. So those efforts could likely fail as well. But in, in wake of what we've seen with large numbers of Republicans, you know, de-registering for the Republican Party in the wake of Jan. 6, you know, it could be anyone's, you know, guess as to what happens.

BRODIE: All right, that is Jerod MacDonald-Evoy, reporter with the Arizona Mirror. Jerod, as always, good to talk to you. Thank you.