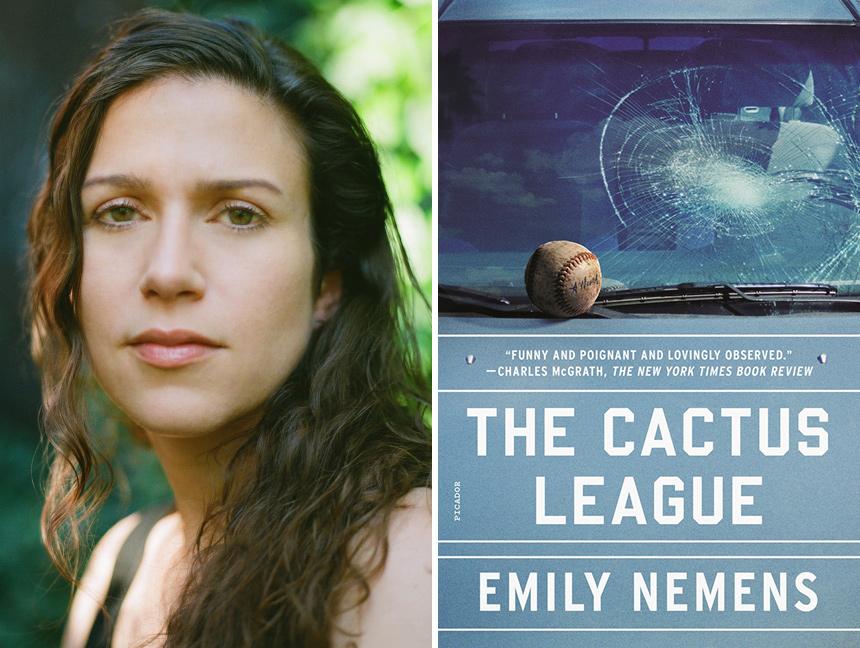 STEVE GOLDSTEIN: Even as the pandemic continues and there's uncertainty over how many fans will be allowed to attend spring training games, as of today (Feb. 17), all 15 Cactus League teams will have seen their pitchers and catchers report in the first step of getting ready for the 2021 baseball season. Prices have gone up, and stadiums have become much larger and fancier over the decades, but spring training continues to offer the allure of a game without a clock that is played under blue skies and in warm weather. Novelist Emily Nemens loves baseball and decided to put the diamond at the center of her first book, "The Cactus League." And she's with me to talk about it. Emily, baseball and boxing seem to be the most successful sports when it comes to fiction, and you clearly love baseball. But did the game's fit within a novel also influence your decision to write about it?

EMILY NEMENS: Certainly. I love baseball, first and foremost. I just, you know, I've been watching it since I was a very little girl and had the vocabulary and the storytelling of just the games themselves in my ear and in my head and in my heart. And then I did sort of pick up a lot of sports literature and was drawn to boxing narratives and baseball ones as well. You know, I think what makes baseball such a good subject is the pace of play, the way the action happens on the field. When you think of basketball or think of football, you've got 10 players — in the case of basketball — all moving at once. Of course, baseball players are adjusting to one another's actions. When the pitcher throws, the batter moves. When the batter moves, the fielders adjust. But it's much more a string of pearls, I guess, in terms of being able to identify and build the narrative of one thing happening, and then the next and then the next. So it's honestly easier to write that than trying to describe what 10 people are doing all at once.

GOLDSTEIN: As far as the spring setting and spring training, obviously, we know how unique the desert is compared to Florida with the Grapefruit League. Was there something about this particular desert setting? I mean, even as people just read the first couple pages of the novel, you're descriptive techniques are — really sets the tone in a real way. But was there something about this actual setting that appealed to you more than, let's say, the Grapefruit League?

NEMENS: Yeah, you know, a prevailing theme of the book is about potential and hoping for a good season. And something about Western expansion and the hope of new communities being built out West — franchises expanding, if you're thinking about Major League Baseball. It felt appropriate for, for this cast of characters, maybe more than the old guard that play in Florida. So that was part of it — it was sort of thinking about expansion and the possibility of new possibilities for these characters is one reason I picked it. The other one is I just, I love the place. I'm a Mariners fan and have been going to the Peoria sports complex since I guess maybe the early '90s to watch the Mariners play. And it's just such a unique setting. I've never lived there. But having gone year after year and seeing how Phoenix Metro has grown and changed, I was just really interested in it as a place and as a community.

GOLDSTEIN: I'm going to say your protagonist in the Cactus League is a guy named Jason Goodyear — which, of course, is a great name when it comes to a sport. Tell us about him as a protagonist.

NEMENS: Yeah. So Jason is, you know, a generational player; he plays left field, he's got an amazing arm. Can run as fast as anyone. Has just a profound precision at the plate. One of my favorite scenes to write was when he's in a batting cage and hitting balls incrementally farther to the right. So basically like the hand of a watch ticking through. And he's — you know, the Los Angeles Lions is the team at the center of the novel — he's their best athlete. They've made a nine-figure investment in his potential. And because everyone loves him as a fan favorite, because he's the strongest player on the team, because there's this huge financial outlay around his success, everyone's watching him like a hawk. He had always been a part of the team when I sort of started thinking about the Lions and building that lineup. And then I realized more and more people were concerned with what's going on with Jason. And so when I realized that, I sort of pivoted a lot of different people — not just the players and the coaches, but the mega-fans, the people working in and around the stadium — to all sort of be watching him closely and trying to figure out what's happening to Jason and how it will impact their lives.

GOLDSTEIN: The relationships between player and fan, player and mega fan, player and teammates, and how all of this factors together in how Jason is right at the center of all of it — how much of this book really is about how these people relate to Jason and he relates to them?

NEMENS: That's a great question. I mean, I think it's really, it's about Jason as the pivot point and maybe the most profound example. But I think it's really about how we rely on one another. He's the example and sort of the the center of the axis, but everyone has their hopes and expectations, and as much as we'd like to be in control of our own destinies and calling all of our shots, everyone else's actions, inactions, mistakes, ambitions do cause a ripple effect through our lives. And so building out that web, imagining how this community is a really symbiotic organism, was the driving force for me.

GOLDSTEIN: And Emily, last question for you. You dedicate the book to your dad, and there are a lot of people — daughters and dads, daughters and moms, sons and moms and sons and dads — who bonded over baseball. How much of that family connection came through in you wanting to put together this book?

NEMENS: And my dad and I have been watching baseball together for over three decades. And he's from New York and he grew up walking distance from Yankee Stadium and showed up in Seattle the same year that Mariners did. And we became Mariners fans and went to the Kingdome, which is not a great place to watch baseball. So these occasional trips down to Arizona, watching baseball outdoors in these small, really fan-friendly stadium just, it felt like — I mean, it was a literal breath of fresh air, but it was just this wonderful experience to watch baseball together in that environment. And I can't say at 12, I was like, "I'm going to write a novel about spring training. Thanks for taking me down here, Dad, for my first research trip." But those periodic visits really did get me excited about this place and about this community.

GOLDSTEIN: That is Emily Nemens. She's the author of the novel, "The Cactus League," which has just been released in paperback. Emily, thanks so much and good luck.