'The Eagles of Heart Mountain': How A Team From A Japanese Internment Camp Changed American Football 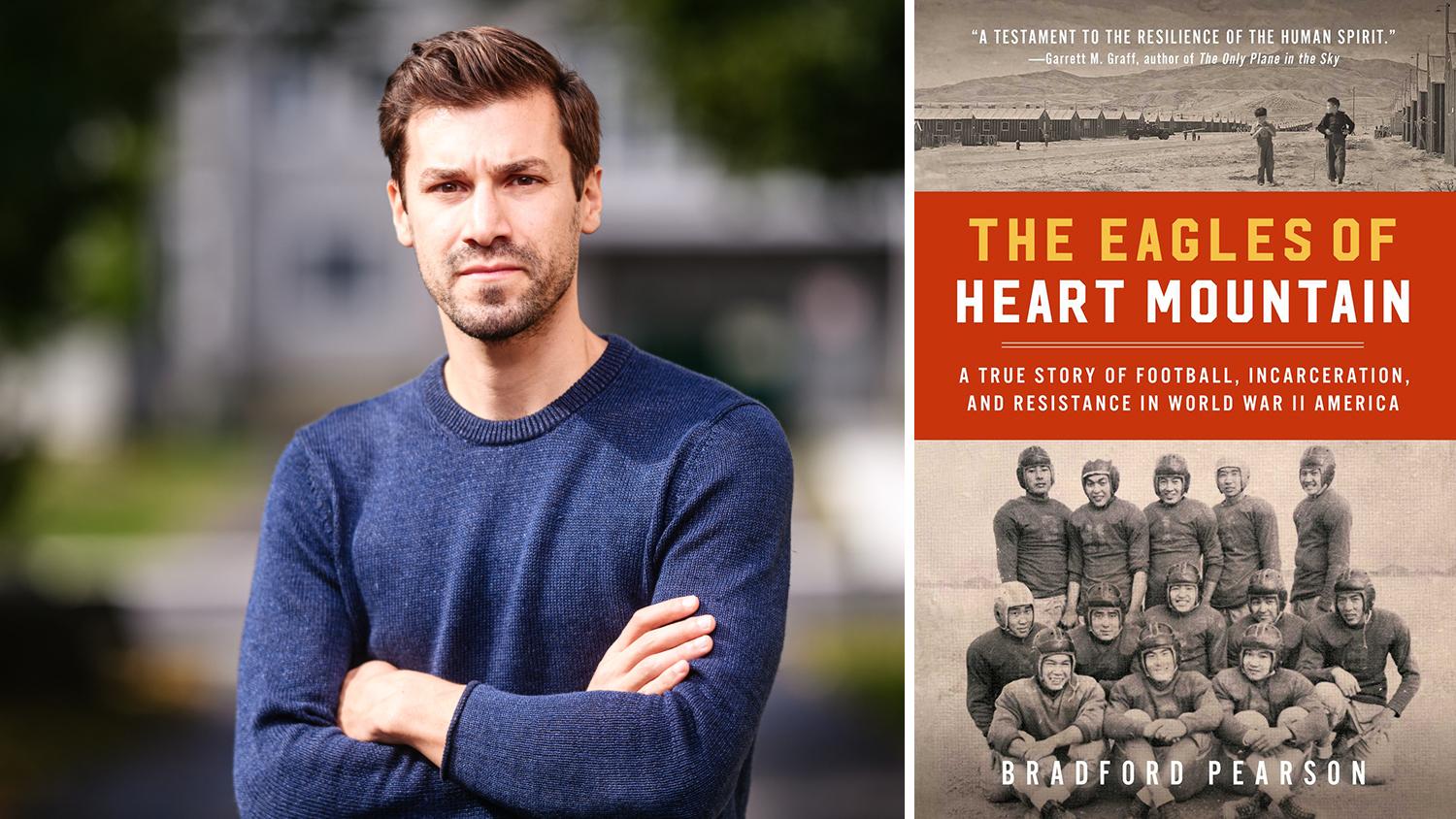 LAUREN GILGER: Not long after Pearl Harbor was bombed by Japanese pilots on Dec. 7, 1941, tens of thousands of Japanese-Americans and others of Japanese descent were forced into internment camps in the West, including here in Arizona. They had to sell their businesses and land and live in the camps as World War II raged on. Some were able to leave to enlist in the military to help fight for a country that had decided to incarcerate them because they might be disloyal. Bradford Pearson covers some of that history in a new book, but he also writes about some specific young men. Our co-host, Steve Goldstein spoke with Pearson about "The Eagles of Heart Mountain: A True Story of Football, Incarceration, and Resistance in World War II America." Pearson began by explaining what really sparked his interest in telling the Wyoming-based history of Japanese high school football players.

BRADFORD PEARSON: Most Japanese-Americans weren't involved in American football. There were some leagues up and down the West Coast of first-generation Japanese immigrants. And then their children, when they got to high school age, a few of them started playing, especially in the Los Angeles area and in the San Francisco Bay area. But, as I get into a little bit in the book, only three players on the Heart Mountain Eagles football team had ever played high school football before they were sent to camp. So you had a bunch of novice players who just sort of came together and developed an offensive scheme that was really quite dominant in Wyoming and Montana in those seasons that the team existed, and was much different than the style of play that most folks in Wyoming and Montana were used to at the time — you know, football was still evolving as a sport and even football from the '40s — the rules are pretty much the same, but how the game is played is much different. And the Eagles came in and took sort of a West Coast style. And because of the size of the Eagles — they were much smaller than most of the teams that they played against — they were forced to run a much faster offense, which, frankly, kind of confounded a lot of the Wyoming and Montana teams they played against.

STEVE GOLDSTEIN: We think about the U.S. military. We think about American football. And these, again, are such American staples. And these are Japanese-American kids, though, who are being treated like they weren't American. Can you talk about that, how they, you know, engaged in these things, which contrary to how they were being treated, they were still expected to be loyal to America somewhat?

GOLDSTEIN: How much were you able to learn about some of the backstories of some of these young men and how they felt about coming together as a team this way, even as they were being incarcerated? 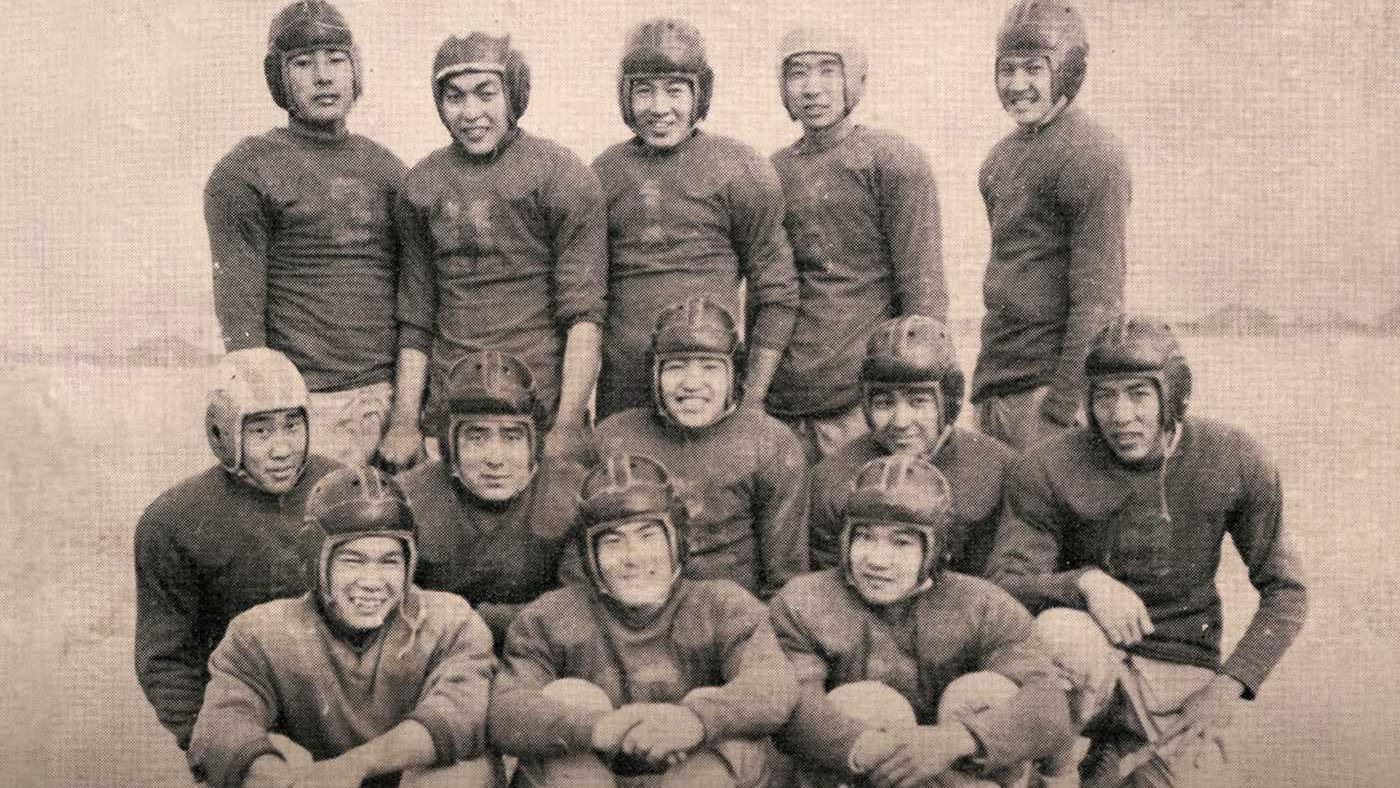 Atria Books
Photo from the cover of "The Eagles of Heart Mountain: A True Story of Football, Incarceration, and Resistance in World War II America."

PEARSON: You know, I was able to delve into the backgrounds of lots of the players, mostly thanks to their families. I was able to interview one living Eagle. But a lot of these guys were, especially after the war, very humble. Even when I was interviewing their families or when I was interviewing them, so few of them actually, I think, really understood just how momentous and how much of an achievement it is what they accomplished with their record while they were playing. I think in the moment while they were doing it, they were just 16, 17, 18-year-old guys who wanted an outlet from sort of the drudgery of being placed in a prison camp, you know? So I don't think what they saw themselves as they were doing while they were teenagers themselves was — or especially when they became adults — was really something that was worthy of note. And like I get into in the book, I think their record speaks for itself. But I also think — when you think about the circumstances they were put into in camp, and you mentioned it a minute ago about the draft being reinstated for Japanese-Americans while these kids were in camp. I look at them and I think that there's — I can't think of another high school team that's had to sort of face this level of adversity and still be so successful, especially in Wyoming history.

PEARSON: In January of 1944, the War Department reinstated the draft for Japanese-Americans. So in that moment, you have a bunch of high school boys about to graduate high school and have to figure out what they stand for and what they believe in. Do they sign up for the draft because they are Americans and they believe in the just cause of World War II? Or do they say, "No, we're not going to join the Army here, we're not going to join in the draft because our families are still here behind barbed wire." And some folks on the team decide to immediately sign up for the draft. They thought, "You know, we're Americans. This is our duty. And despite the circumstances, despite our lot right now, we still need to defend our country." While others pretty quickly and very clear eyed said, "No, our country has forsaken us and has put us behind these walls. And until we get some sort of clarity on our status as Americans, we're not going to fight." And those folks eventually went to jail for that.

GOLDSTEIN: That's Bradford Pearson, author of "The Eagles of Heart Mountain: A True Story of Football, Incarceration, and Resistance in World War II America." He'll be in virtual conversation with Changing Hands Bookstore this evening at 5 p.m.