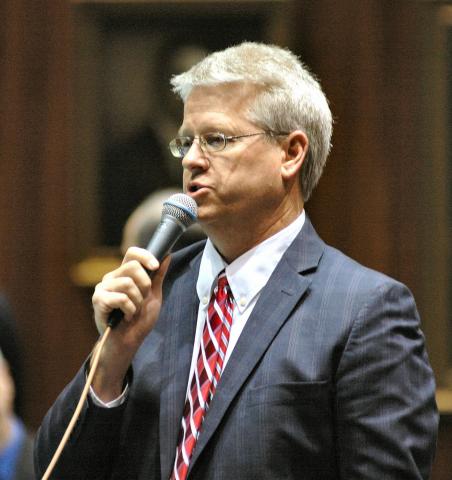 Arizona's 11 Democrat electors cast their votes Monday for President-elect Joe Biden even as the chairman of a Senate panel said he will issue subpoenas to check the accuracy of hardware and software used to count votes in Maricopa County.

The announcement followed more than six hours of testimony in the Senate Judiciary Committee, which led to a series of questions from Republican senators about whether the results can be trusted.

It's unlikely that anything that an audit turns up would affect the results of the election.

That would require either a court ruling overturning the results — something multiple judges have so far refused to do — or the full Legislature trying to pick its own slate of electors. But both Senate President Karen Fann and House Speaker Rusty Bowers have said there does not appear to be a legal way to do that, even assuming lawmakers could call themselves into special session before Jan. 6 when Congress counts the electoral votes.

Even Farnsworth, who chairs the Judiciary Committee, suggested that this was simply a matter of addressing the various claims and doubts "and try and see if we can reinsert some confidence in our election process."

"We hold an audit and we see what the outcome is," he said. "And then we can put this to rest."

Farnsworth said the subpoenas could be issued as early as Tuesday.

The subpoenas could address charges leveled against the Dominion Voting Systems, both in Arizona and nationally, that the equipment and software were deliberately programmed to deliver more votes for Biden. None of those complaints have been found valid by any court anywhere in the nation. But that didn't stop lawmakers from asking and saying that there needs to be an independent audit and even a full hand count of all the ballots.

Sen. Vince Leach (R-Tucson) one of those who wants that 100% hand count, got Maricopa County Elections Director Scott Jarrett to acknowledge that Dominion workers had 24/7 access to his office and even, in certain circumstances, access to the equipment.

But Jarrett said there is no way to alter the codes in a way that would change the outcome.

He said it starts with "logic and accuracy" test of the equipment, both before and after the election. Jarrett said that would not only capture any change made in the software but that the program is built in a way so that any change would render the results "not readable."

The equipment itself, he said, is also subject to independent certification by the Secretary of State's Office.

More to the point, Jarrett pointed out that state law requires an actual hand count of a random sample of ballots, both those mailed in early and those cast on Election Day. He said the batches to be sampled and the elections to be reviewed are chosen by officials from both political parties. And of the more than 47,000 ballots checked by hand there was not a single vote difference from what was recorded by the equipment.

"These hand counts are an independent audit," Jarrett told lawmakers. And he said they showed the equipment worked as expected.

Farnsworth was not convinced.

"I do have a concern that the county is taking the position that it just can't happen," he said.

"There is a litany of white-collar crimes, digital crimes in the history of this country and this world of some very sophisticated people and the victims didn't recognize it until some future time," Farnsworth said. "I think it's really, really dangerous for us to say, 'It can't happen.'"

That sentiment was echoed by Sen. Sonny Borrelli (R-Lake Havasu City). He said even the operating manual for Dominion software suggests "data can be changed and votes switched around."

Farnsworth also complained that it's possible for people who are not U.S. citizens to have voted in the presidential race. Arizona does require proof of citizenship to register to vote. But a federal law spells out that people without such proof can use a registration form prepared by the Election Assistance Commission, one that has no such requirement. And those who do not provide citizenship proof can vote in federal elections, including for president and members of Congress.

Jarrett acknowledged that more than 3,000 such "federal-only" ballots were cast in Maricopa County, people who he acknowledged might not be U.S. citizens.

"That is harmful, detrimental, undercuts," Farnsworth said. "And it is outrageous that we have that kind of a mandate from Congress. It challenges the very sovereignty of this country, in my opinion."

Jarrett also defended against claims that observers from political parties could not get close enough to really monitor what was going on in both the process to check signatures on early ballot envelopes and in the actual counting. He acknowledged, though, that there were efforts to keep observers at least six feet from election workers amid fears of COVID-19.

Jarrett also said that, despite rumors to the contrary, there were not late "spikes" of votes for Biden. In fact, Jarrett said, the reverse was in some ways true, with Biden having a big lead among the first ballots counted and the later-counted ballots swinging for Trump.