Scientist Studies Urine-Soaked Rat Nests For Clues To Past Biodiversity

MARK BRODIE: Different scientists take different approaches to trying to gain insights about the past. They can study tree rings, rocks or skeletons, for instance. But my next guest prefers analyzing items that most people would probably rather avoid. Rob Harbert is a professor of biology at Stonehill College near Boston and is the author of a paper discussing how valuable very old urine-soaked rat nests, or middens, can be to find historical clues. Harbert has been studying middens from the Southwest — the samples are from the University of Arizona. I spoke with him earlier and asked what the benefit is to science of looking at these middens and trying to figure out what's in there. 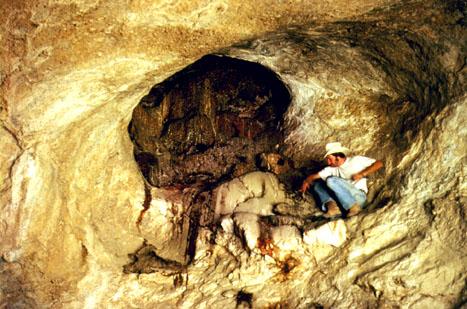 ROB HARBERT: I mean, the primary reason that we started into this study, I was actually really interested in these middens as a record of past ecosystems and also past climate. And then kind of secondary to that, in my interest, has been exploring the midden contents in terms of what kind of ancient DNA we can pull out of these, and that tells us a lot — a lot more, in some ways — about the kinds of plants and animals and microorganisms that existed in these places in the past. And we're talking like 20,000 or 30,000 years ago in the past.

BRODIE: Where do you find these middens? Like, do you have them somewhere, or do you have to go out and actively search for them?

HARBERT: So I'm kind of lucky in a way that I have a lot of great colleagues who have spent their careers collecting packrat middens in their roles in various places, going out and doing fieldwork in the West. I mostly have just called colleagues and said, "Hey, would you like to send me some packrat middens? I think we could get some DNA out of them and then do something with that."

BRODIE: So I think a lot of people — I did this when I was in grade school — you go through, for example, like an owl pellet. You dissect it and you see different bones of what the owl might have eaten and then digested. How do you go through one of these middens and try to figure out what's in it and then interpret what that might tell you?

HARBERT: So the typical analysis that people have been doing is very similar to that. The midden itself — once it gets old enough, they're very, very hard. But the stuff that makes it hard is primarily crystalized rat urine, which is soluble in water. So the typical analysis is to take a piece of the midden, dunk it in a bucket of water for a few days, and then come back and filter out all the bigger pieces. And that tends to be chunks of plant material, primarily, because that's what the rats are actually building their nests out of. And then people who really know what they're looking for can identify what kinds of plants those were from these tiny fragments. In my study, what we've been mostly doing is kind of skipping that step, because putting the midden in water is bad for the DNA. That'll break it down really fast. So we kind of skip that step, and we don't necessarily look closely at everything that's in there. Instead we take a smaller sample of that and try and go directly to the lab to extract DNA that then we can sequence and use computers to tell us what that might have come from.

BRODIE: What have you found so far that was maybe something you weren't expecting or something surprising?

HARBERT: Well, first off, I think a really positive result for us was that we found a lot of what we were expecting, which is to say we found a lot of DNA that belonged to plants and plants that were consistent with what we already knew about the environment. That was really good, because it's kind of unbelievable, even as somebody studies this stuff, that the DNA — molecules of DNA — can sit there intact in the desert for thousands of years. So that's number one that's a great thing. But in terms of things that we weren't really expecting, we do find evidence of some plants that make sense but we don't have actual fossil evidence of. This could be from very small pieces. This could be from pollen or other trace parts of the plant. And we also see DNA from some animals, insects, some parasites. We find evidence of lots of bacteria. So those are all things that we typically don't or couldn't see in a normal fossil analysis of these materials.

HARBERT: It definitely helps, yeah. So the way that we're thinking about this is that the fossil analysis, kind of the classic analysis, and the information we get from these new genetic analyses are really complementary tools. For the most part, yeah, we see similar plants to what we expected to see based on what we already knew. And then we see some more, and there's some that we don't see. So that's an open question a little bit. But I think that it's a good reinforcement and maybe they're avenues to explore how to better merge these two approaches in the future.

BRODIE: Am I right, though, that just because you don't see something that you might have expected, that doesn't mean you can rule out that it was there? It just didn't happen to be in this particular sequence of DNA.

HARBERT: Right. And there are about a million reasons why a particular molecule of DNA or a particular tissue from a plant may not have made it through the test of time and be something that we could still see.

HARBERT: What we've done so far has been kind of a proof of concept. The big finding here is that we can do this. And sort of the next step — I think is what's really exciting about this — is that we're thinking now really hard about ways to better capture the DNA that we want to see. So let's say we're interested in one particular plant. We might be able to capture more of that genome and then do a better job identifying actual changes in the genome over time. So this is kind of unprecedented, at least in the world of plants, where we might be able to get a snapshot of what like a ponderosa pine genome was like 10,000 years ago. And that might tell us a lot about adaptation to different climates, to climate change that has occurred in the past that may be informative for the future.

BRODIE: All right. That is Rob Harbert. He's a professor of biology at Stonehill College in the Boston area. Rob, nice to talk to you. Thank you.

HARBERT: Thank you for having me.