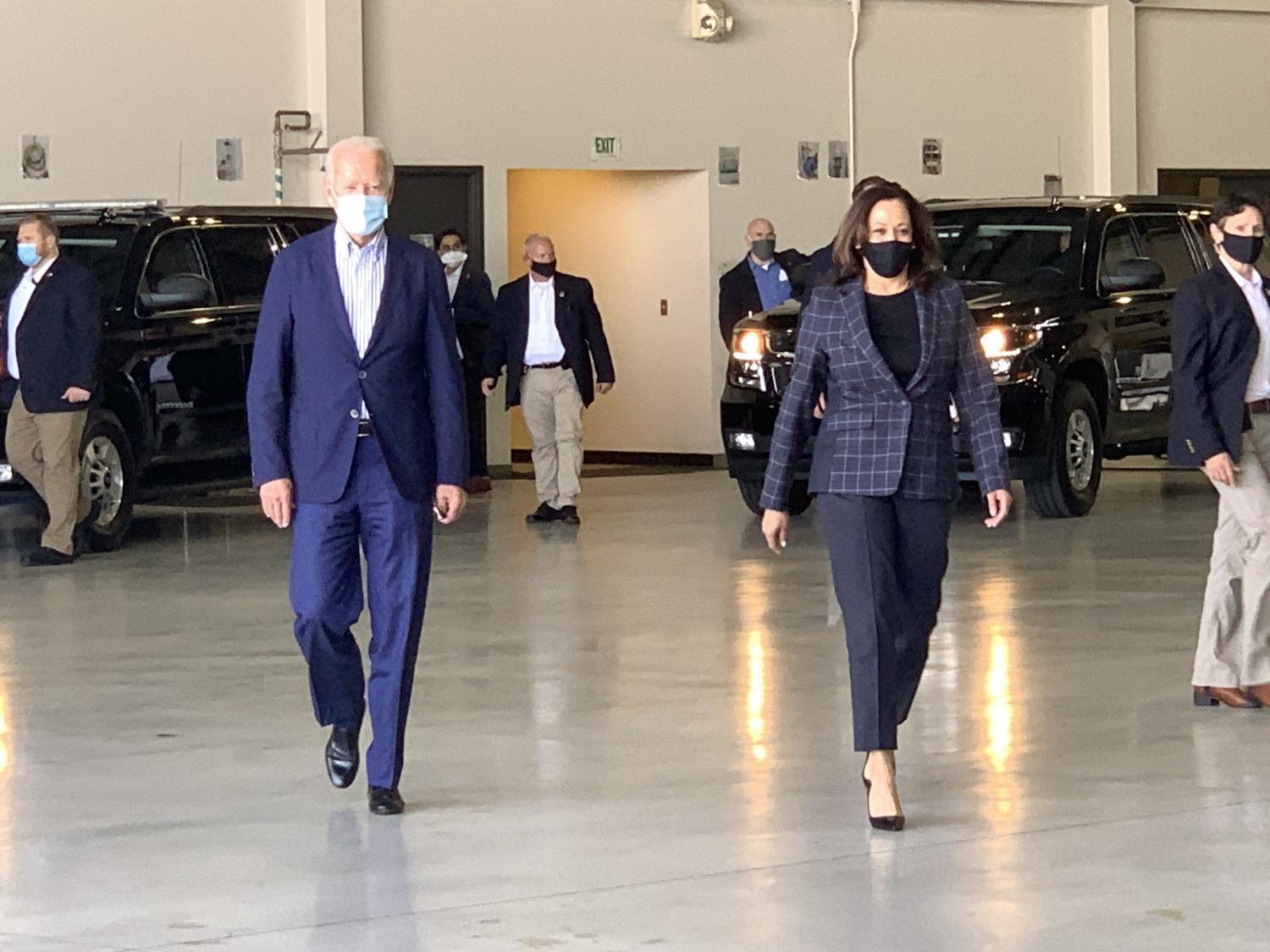 Los Angeles Times/Pool
Joe Biden and Kamala Harris appear together at Sky Harbor Airport prior to their campaign events in Phoenix on Oct. 8, 2020.

Hobbs and Ducey both vouched for the integrity of the vote count.

“We do elections well here in Arizona. The system is strong,” Ducey said.

He did not directly address Trump's claims of irregularities but said the state pulled off a successful election with a mix of in-person and mail voting despite the pandemic.

"The pandemic and COVID-19 brought new and unprecedented challenges in our state. But as I’ve said before, we do elections well here in Arizona," the governor said.

Arizona voters should know that the election “was conducted with transparency, accuracy and fairness in accordance with Arizona's laws and election procedures, despite numerous unfounded claims to the contrary,” Hobbs said.

Biden is only the second Democrat in 70 years to win Arizona. In the final tally, he won by 10,457 votes, 0.3 percent of the nearly 3.4 million ballots cast. Eleven Democratic electors will meet Dec. 14 to formally cast Arizona’s electoral votes for Biden.

Elections challenges brought by the Trump campaign or his backers in key battleground states have largely been unsuccessful as Trump continues to allege voter fraud while refusing to concede.

There is no evidence of widespread fraud in the 2020 election. In fact, election officials from both political parties have stated publicly that the election went well and international observers confirmed there were no serious irregularities.

Even as state officials certified the results, Trump's lawyers, Rudy Giuliani and Jenna Ellis, held a meeting at a downtown Phoenix hotel to lay out claims of irregularities in Arizona's vote count. But they did not provide evidence of widespread fraud.

“The officials certifying have made no effort to find out the truth, which to me, gives the state Legislature the perfect reason to take over the conduct of this election because it’s being conducted irresponsibly and unfairly,” Giuliani said.

Nine Republican lawmakers attended the hearing, which was expected to last for several hours. They had requested permission to hold a formal legislative hearing at the Capitol but were denied by the House speaker and Senate president.

Last week, a judge in Phoenix rejected the Arizona Republican Party’s bid to postpone the certification of election results in Maricopa County and dismissed the party’s legal challenge that sought a new audit of a sampling of ballots.

Lawyers for the state GOP were scheduled to be in court again Monday to argue for a fresh challenge of the verification process for mail ballots.

The certification also paves the way for Democrat Mark Kelly to take his seat in the U.S. Senate, formalizing his victory in a special election to finish the last two years of the term of John McCain, who died in 2018. Kelly is scheduled to be sworn in on Wednesday in Washington.

Vote certification at the local and state level is typically a ministerial task that gets little notice, occurring after local election officials have conducted audits to ensure their vote tallies are accurate. That changed this year with Trump’s refusal to concede and his attempts to overturn the results of the election through a fusillade of legal challenges in battleground states he lost.