Negative Polarization: Why 2020's Record Voter Turnout Will Be Hard To Sustain 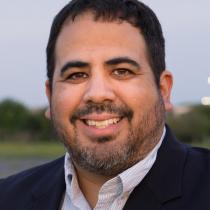 STEVE GOLDSTEIN: Concerns the pandemic would impact this year's election do not appear to have been borne out.

LAUREN GILGER: That's right. In fact, the story of the 2020 election here and across the country may end up being all about turnout. The Associated Press and the United States Election Project reported this week that turnout in this election — with votes still being counted — is the highest it's been since 1968. Here in Arizona, the Secretary of State's Office is reporting nearly 80% turnout. And whether it was a referendum on President Trump or increasing access to voting this year, our next guest says one thing is for sure: It's pretty unprecedented. Luke Pérez is an assistant professor in the School of Civic and Economic Thought and Leadership at Arizona State University. And I spoke with him more about it.

LUKE PÉREZ: I was looking at some of the historic turnouts from previous — but we're talking numbers we've not seen in 60, 70 years in terms of percentage of Americans actually turning out to vote. And I think obviously there's more votes raw total because there are so many more Americans. But even in just a percentage of electoral turnout, it's very significant.

GILGER: I want to put this into context too, because 80% is not necessarily 80% of everyone who is eligible to vote in the country, right? These are registered voters?

PÉREZ: I think that's right. Yeah. It might be a little bit lower if you were to count eligible voters. There's often a lot of people who are eligible to vote but still never bother to register.

GILGER: Right. OK. So let's put this into context then, especially amidst a pandemic, right? Where it's not as easy to go in person. We know we saw record turnout for mail-in ballots. I mean, you're somebody who studies civics, right? Like the, is this really good news? Were people like you who care about civics in this country and voter participation and people being involved in our democracy happy watching these numbers roll in?

PÉREZ: It's potentially good news. Obviously, with the pandemic and with the high stakes and the controversies over the last four years, you want to take it with a grain of salt because it could very well just be a kind of perfect storm of while everyone's at home, and it's a lot easier to fill out your mail-in ballot when you're just sitting around all day. And you have a lot of energy from both Democrats and Republicans to either hold the presidency or get Joe Biden elected. And so there's a lot of things that are obviously converging or have converged this year. But it may not last. It may — when we look at the midterms, I think, or in the next presidential election in 2024 — I would expect the numbers to go down. But the question is, by how much? Will it go down to historic lows again, or will both parties' way to maintain the energy to keep voters coming out?

GILGER: Yeah, I want to get to that, too. So where does this stand in history? We know these are record numbers, but like what kind of, you know, turnout do we normally see? In even a presidential election say?

PÉREZ: I mean, usually you'll see numbers in the mid to high 60s, right? I think. I can't remember what it was in 2016, but, you know, I think it was barely right around 70%, right? And so to see a huge jump by that margin nationally is a pretty significant jump from one presidential cycle to the next.

GILGER: And was this across the board? Like, was this Democrats and Republicans, mail-in voters, in-person, voters, etc.?

PÉREZ: As far as I know, yes. I think going into the election, there was a lot of question of how the mail-in voters would cannibalize same-day election voting. So typically, when you look at mail-in voting numbers, there's a large number of them who were going to vote on Election Day anyway, but for one reason or another decided to get their mail-in ballot in early. And so that might actually depress turnout. And so that was one of the big open questions going into Election Day. How many of those mail-in voters were just people that would have voted on Election Day anyway and then decided to do a mail-in ballot because of the pandemic? Well, turns out, some of them, sure. But still, nevertheless, we saw a massive number of people voting for the first time or just getting around to voting when they may not have voted in the last two or three cycles.

GILGER: Can this happen again, I guess is the question here. Like, will this maybe mark a turning point in political participation in our country where we could, potentially going forward, see this kind of high level of participation?

PÉREZ: I hope that it will, but I'm a bit of a skeptic. I think a lot of what's been driving people to the polls, both on the right and the left, is something that the election specialists called negative polarization. It's not so much a vote for my candidate or my party, but it's a vote against the other person or the other party. And that kind of negative energy is very difficult to maintain for a long period of time. I think both Democrats and Republicans have done their best to rely on that. But if that really is what's been driving individuals to the polls, you know, with the Trump presidency, with sort of everything that was on the line, we may have probably hit the peak for what that's going to look like. And so it's going to be incumbent upon Democrats and Republicans who want to maintain this kind of high energy to find a way to convert a lot of those negative polarized voters into positive polarized voters and make people really excited about their party platforms, about their candidates, and find ways to keep them engaged in the midterms or in state elections — areas in which you often see a much lower amount of turnout.

GILGER: So essentially what you're saying here is that like so much of the political atmosphere in the last four years, this is all about Trump.

PÉREZ: My sense is yes. And we very well could be wrong. And I think that will be the open question that we need to look at going forward at some of the future elections, right? How much of this was Trump, and how much of this is just the general realignment that's currently taking place? One of the reasons why the polls were wrong in 2016 as well as in 2020 is that people are moving around, right? We haven't had a major political realignment since, I think the 1970s. And so we've been due for it for a while. And people are moving around. Democrats are becoming Republicans. Republicans are becoming Democrats. New voters are coming in, right? All of these kinds of political coalitions are moving around. And it's not clear when we'll finish. But I think there is some of that that's built into the ambiguity when we look at the election turnouts. And so how much of this is Trump? How much of this is the realignment? How much of this is a function of being in very divided times? I mean, I think even without President Trump — if another Republican had won or if Hillary Clinton had won in 2016 — we still would probably be talking about very record turnout. We still would have had a coronavirus. We still would have had other things on the table. It's unclear to me whether our turnout would have been higher or lower, but I think we still would have been somewhere in a historic amount of turnout.

GILGER: All right. That is Luke Pérez, assistant professor in the School of Civic and Economic Thought and Leadership at Arizona State University. Luke, thank you so much for joining us to talk this through today.

PÉREZ: Yeah, thank you for having me. I really enjoyed it.